RSS Feed
← If your children want to visit Legoland Malaysia, take your bike
The R@SKLs in Taiwan: Day 2 →

The R@SKLs in Taiwan: Day 1

Last year Pai floated the idea of a R@SKLs cycling trip to Taiwan.  Pai is Taiwanese.  He offered to make all the arrangments.

In September 2017 planning started in earnest.  When to go?  How to get there?  Where to ride?  Where to stay?  What support would we need?  What would it cost?

By early December the dates for the trip had been confirmed.  April 10th to April 15th.

Pai flew to Taipei a few days before to finalise arrangements.  Kenix and Mark were also in Taipei a day or two early,  The rest of us flew into Taoyuan Airport on Tuesday.  Arthur, Heng Keng, Kiam Woon, Lay, Luanne, Simon, TH and I were on flights from Kuala Lumpur.  Aaron, Ralf and Voon Kiat flew in from Hong Kong.

This was the queue to depart Kuala Lumpur International Airport.  It took an hour to taxi to the runway.

We unpacked and assembled our bikes in the Taoyuan Airport arrival hall.  All the bikes arrived unscathed.

The trio from Hong Kong had been the earliest to arrive.  While the rest of us were building up our bikes. Pai, Ralf, and Voon Kiat set the tone for our trip.  Yam seng! 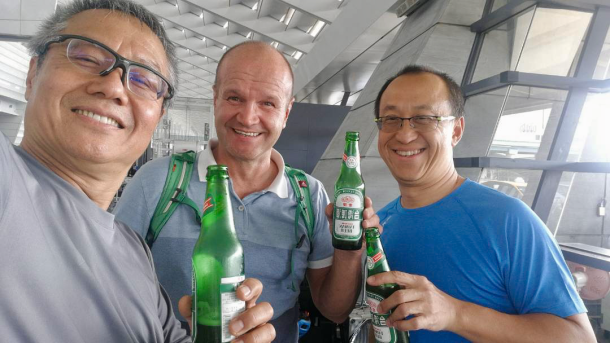 After all the bikes were assembled, we took the party outside the airport.

There was one casualty during the bike assembly process.  A broken seat post clamp on Heng Keng’s bike. Pai had laid on excellent local assistance.  Xiao Ger and Ah Dar would be driving the vans and providing mechanical support.  They knew where to get a new seat post clamp for Heng Keng’s Cervelo.  His bike would be sorted out in the morning

Our bikes were loaded onto the vans to be driven to the Kenting Youth Activity Centre, 450km to the south.  That is where we would spend our first night in Taiwan.

We started by rail.  First via the Taipei Metro from Taoyuan Airport to Taoyuan Station.

Everyone was hungry, so we had something to eat at Taoyuan Station.  Some of us opted for Mos Burger.

Arthur had an aperitif while waiting for his wagyu beef burger. After dinner, we rode the  Taiwan High Speed Rail to Zuoying Station.  At times we were travelling at more than 295kph.

The Kenting Youth Activity Centre is about 115km from Zuoying.  We had planned to take the express bus.  The last express bus for the day had left by the time we got to Zuoying.  So we piled into three large taxis instead.

The centre is designed in the classical Minnan style.  Minnan or Hokio architecture features, among other things, the swallowtail roof with its upward-curving ridges. 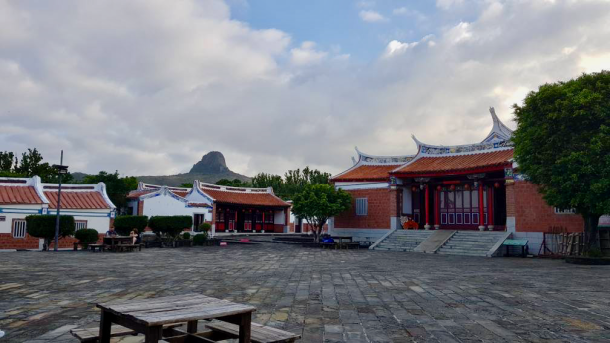 This is the entrance to a set of guest rooms.

Within walking distance of the activity centre is the Kenting Street Night Market.  It is probably the biggest market in southern Taiwan, second only to the Fengjia Night Market in Taichung.

There are also lots of stalls sellingknickknacks, gadgets, accessories, and clothes.  I am just glad that Ralf didn’t wear these while riding!

I left Malaysia in 2008 as a non-cyclist. I am back home now with three road bikes and all the paraphernalia that goes with being addicted to cycling.
View all posts by alchemyrider »
← If your children want to visit Legoland Malaysia, take your bike
The R@SKLs in Taiwan: Day 2 →