City Ride with a Difference

It has been a long time since I pulled on a pair of  baggy shorts and a t-shirt, put platform pedals on a bike and and rode the city streets.

I headed out into the evening rush hour.  The four-wheeled traffic was hardly moving along Jalan Tun Razak and Jalan Ampang Hilir.  It was bumper-to-bumper, sometimes three or four lanes wide, until I got to the end of Jalan Kerja Air Lama, where it turns into Jalan 1.

Jalan 1 loops around the Kelab Darul Ehsan golf course.  The golf course bumps up against southern end of the Titiwangsa Range.  As I rode around Jalan 1 I was at the very eastern edge of the city.  I had fairways and putting greens to my left, and jungle to my right.  Click on the street and satellite maps to open zoomable versions in new windows. 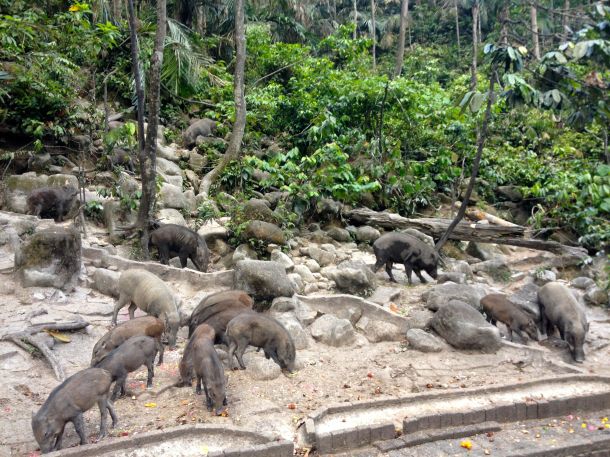 The wild boar were such a novelty that I did the loop a second time so I could see them again.

Then it was back into the traffic to get home.  A wild ride in more ways than one.