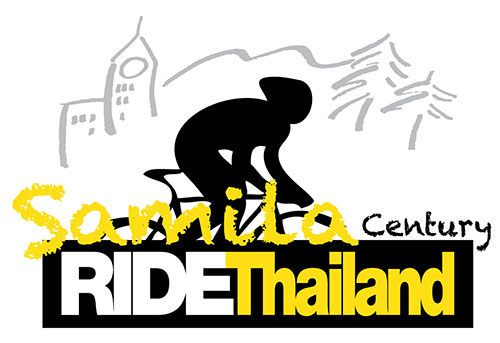 We started talking about this ride in August.  The number of riders in Team KESAS Kruisers fluctuated as Sunday 17th November approached.  Six of us loaded our bikes into Keat’s pickup truck early Friday morning for the 565 km / 350 mi drive to Songkhla. 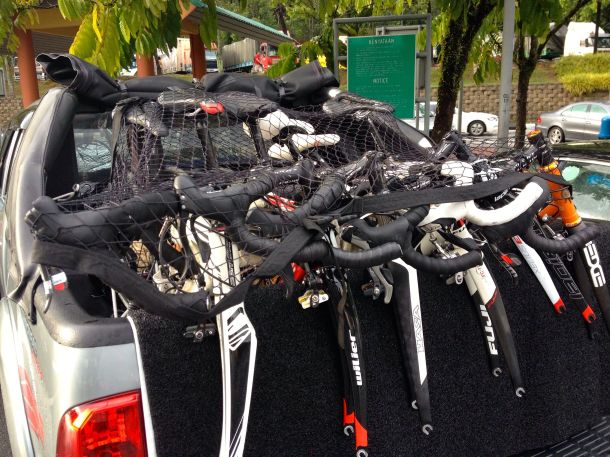 Keat, Marco and I rode in the truck, and Marvin, Chris and Mark were in Marvin’s hot hatchback.

Some planning went into fitting six bicycles into the bed of the pickup truck.  Meticulous planning went into deciding where to eat along the way.  Breakfast was at the Sungai Buloh R&R.  I should be embarrassed to admit that this was only 26 km / 16 mi into our journey.  This stop was chosen for convenience over the quality of the food available.

The first “foodie” stop was at the Pun Chun Noodle House in Bidor.  Pun Chun is noted for its duck noodles.

They go through a lot of duck! 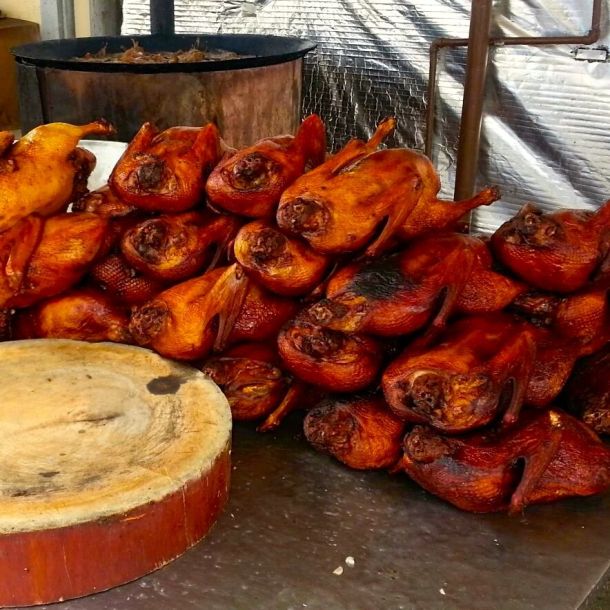 Lunch was at Ong Cheng Huat Seafood in Bagan Lalang.  The restaurant is tucked away in a small village.  Marvin knew how to get there.  The food was outstanding.

The Steamed Red Snapper was particularly good.  This was Keat’s favorite bit of the fish. 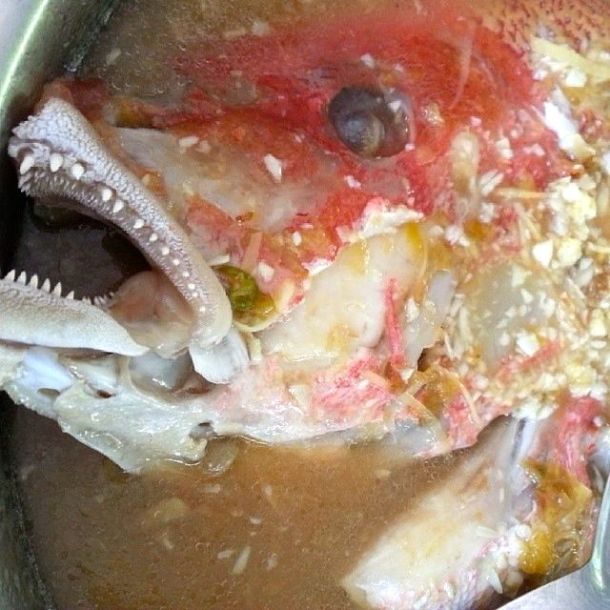 We got to the Thai border at about 4.30 pm Malaysian time.  Chris, Marco and I watched the world go by while Keat and Marvin sorted out the paperwork required to drive their vehicles into Thailand. 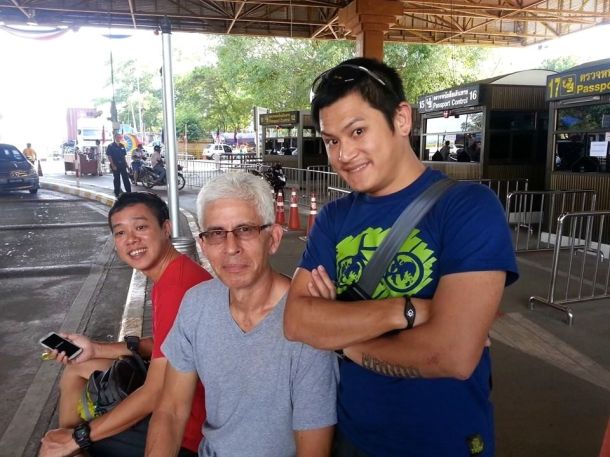 We may have planned our food stops well, but we weren’t so clever when it came to picking the time of day to drive from the border post at Sadao to Hat Yai and on to Songkhla.  Thailand is one hour behind Malaysia.  It was about 4 pm Thai time by the time we left Sadao.  Which meant that we drove into the height of the evening rush outside Hat Yai, and then crawled all the way to Songkhla.  The last 95 km / 60 mi of the drive took more than two hours.

So it was nice to be in a hotel in the center of Songkhla, within walking distance of places to eat.  I wouldn’t go so far as to describe the Pavilion Hotel as “elegant” (see the hotel website).  It may well have been elegant in its heyday, but is a bit worse for wear today.  It met our needs well enough though.  And at RM215 / USD68 per person for three nights, including breakfast, we shouldn’t complain.

We wandered into Mr. Steak for dinner.  Ribs, steaks and pasta are not what immediately come to mind when you think of what to eat in Thailand.  Mr. Steak hit the spot though.  This is the team – and a photo bomber! 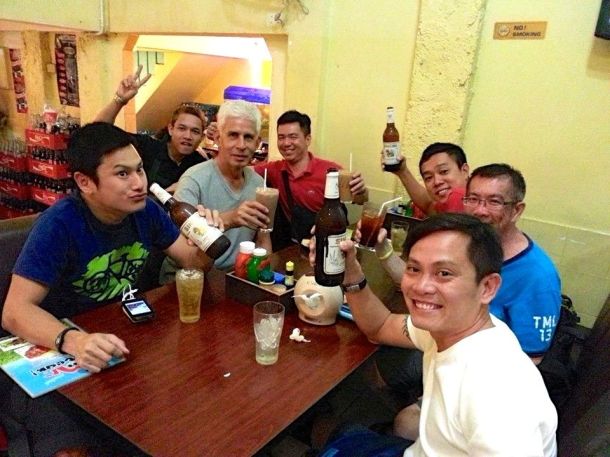 We chose our hotel because it was very close to the official hotel and the start and finish for the ride.    The organizers ran into a last-minute snag with that hotel and had to move everything to the Haad Kaew Resort.  Which is about 30 km / 19 mi away via the two parts of the Tinsulanonda Bridge that join the mainland to Ko Yo Island in Songkhla Lake.  Or 10 km / 6 mi away if you take the ferry across the narrow strait that connects the lake to the Gulf of Thailand.

We weren’t able to cancel our reservations at the Pavilion Hotel.  So the plan was to cycle from the hotel to where the ride would start.  Hence the first order of business after breakfast on Saturday was to recce the shorter route to the Haad Kaew Resort.

On the way to the ferry we explored a little.  There is a well-known statue, the Golden Mermaid, on Samila Beach.  This statue, dedicated to knowledge, looked more interesting to Marvin. 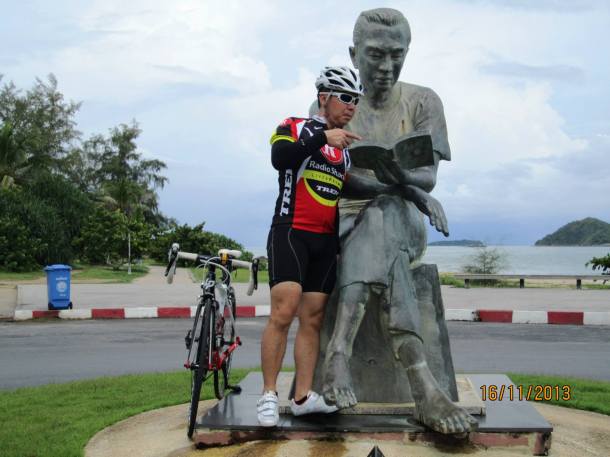 The scenic route to the ferry runs along the beach.  Marco, Marvin and I, and the others, took turns being photographed with the sea behind us. 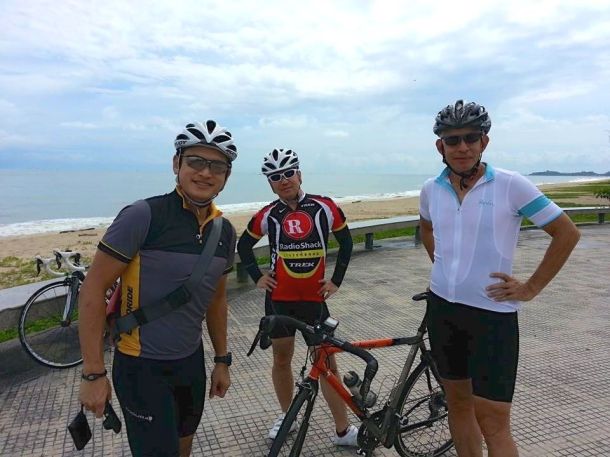 We had to do a bit of deciphering of signs along the way, but we found the ferry. 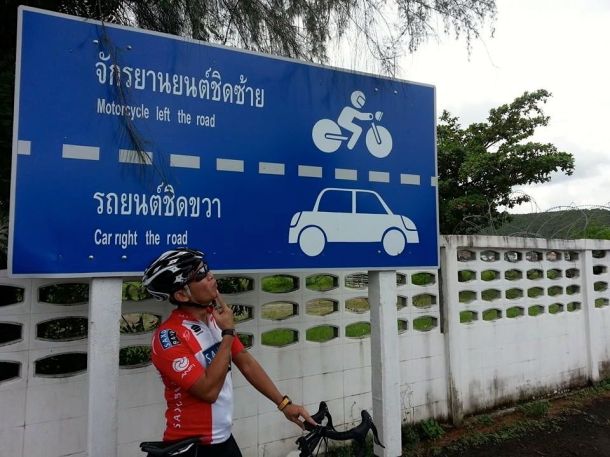 The ferry operates from 5am, which meant that we would have no problem getting to the start before 7am.  An added bonus is that the ferry is free for cyclists.

We shared the ferry with a few cars and pickup trucks, and a lot of small motorcycles and scooters.  One family was going to have chicken feet, prawns, and squash for lunch or dinner. 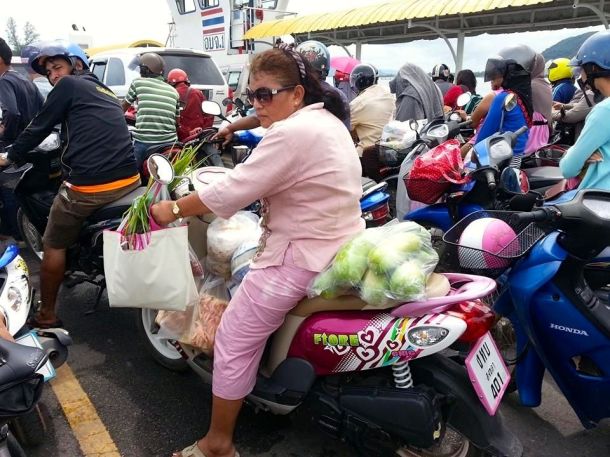 Once off the ferry we were cycling along the tail end of the ride route, so there were arrows guiding us to the Haad Kaew Resort.  Where we discovered that the Samila Century Ride was the shorter option.  The Songkhla Ipoh Friendship Ride had started the day before.  It is about 360 km / 224 mi from Songkhla to Ipoh in Malaysia. 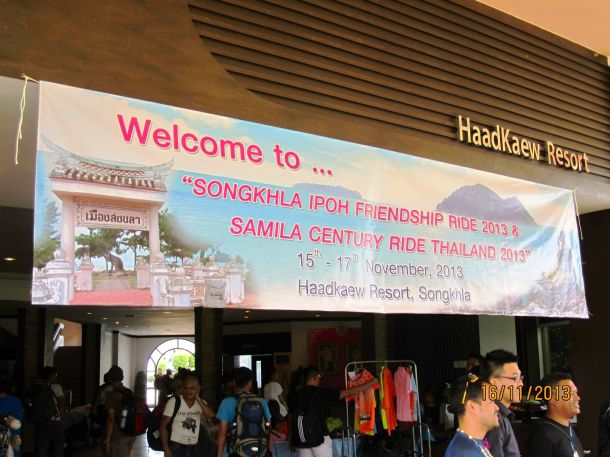 Our jerseys and ride numbers were waiting for us when we got there.  We introduced ourselves to the event organizer, Ms. Metharin Pongratchatakaran.

As for our footwear.  We thought it was going to rain and didn’t want to risk getting our cycling shoes wet. 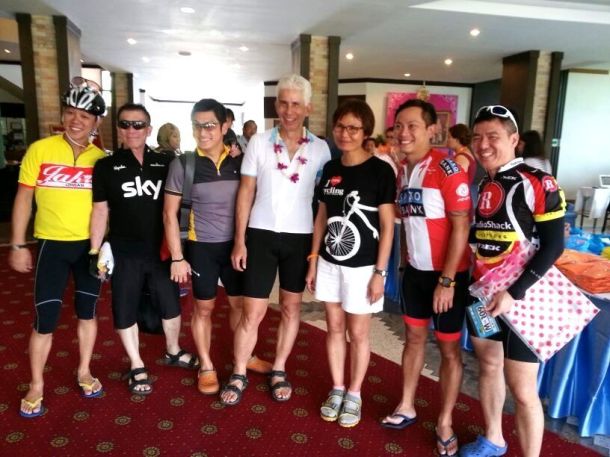 The sandals worked out well. 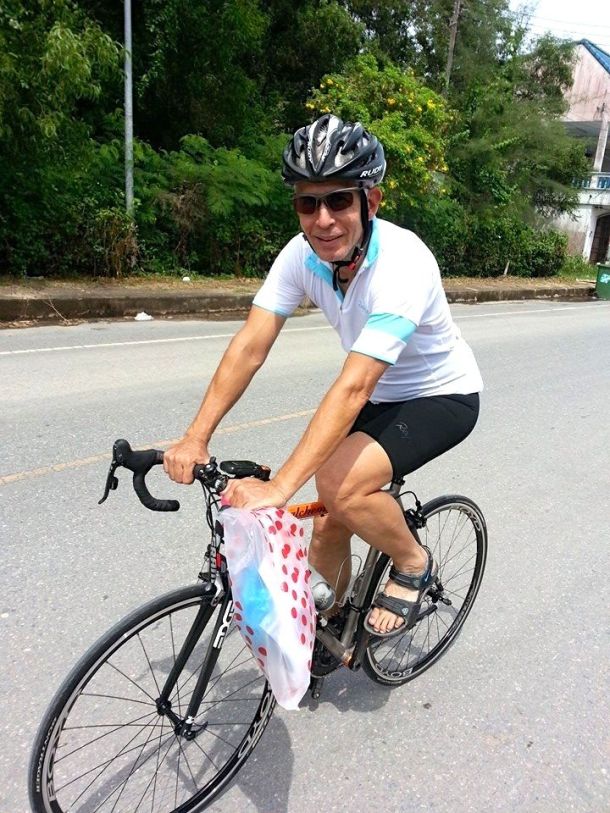 We were all a bit peckish by the time we got off the ferry back across the strait.  There are a host of seafood restaurants to choose from on Samila Beach.

It was time for some Thai food.  Food doesn’t come more Thai than tom yam soup. 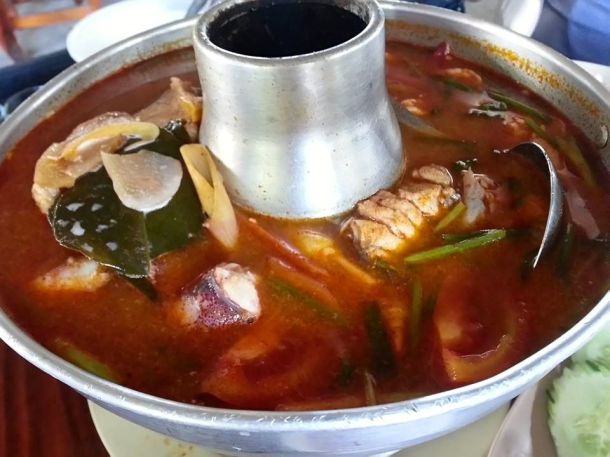 I’m surprised we could ride our bikes the rest of the way back to the hotel after all the seafood we ate for lunch.  I’m not surprised that everyone took a long nap that afternoon.

The first thing we saw was a pickup truck that had been converted into a Japanese restaurant.  Two cooks were in the kitchen on the roof.  The diners sat at tables on the bed, or at tables that folded out from either side of the truck.  Food came down from the kitchen on a small electrically-operated lift.  All quite ingenious. 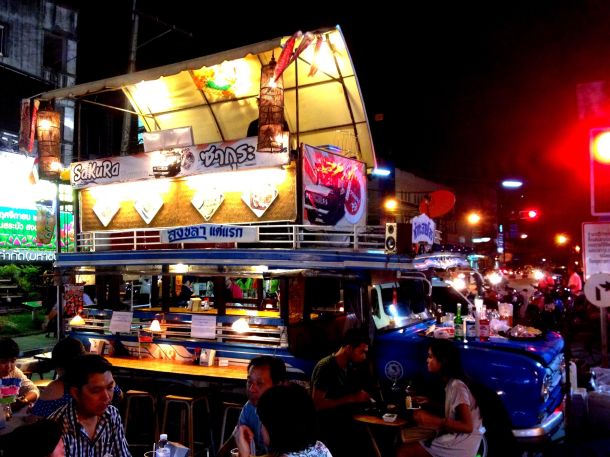 These sweets are called Look Choop.  They could substitute for energy chews.  They certainly look prettier than your average Clif Shot Blok.  Sweetened mung bean paste is moulded to look like fruits and vegetables.  A candy glaze adds color. 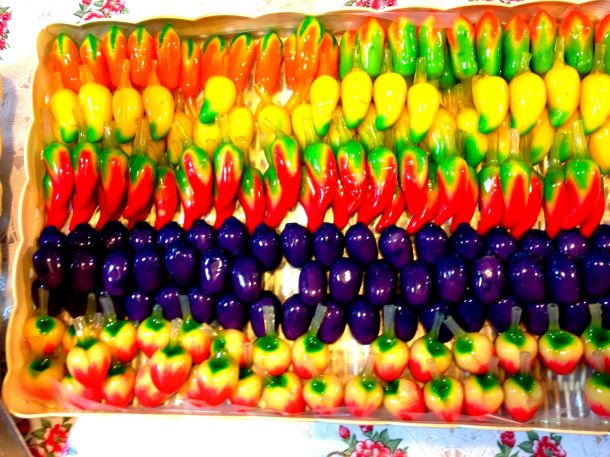 I’m not so sure these treats will catch on as a substitute for energy chews though. 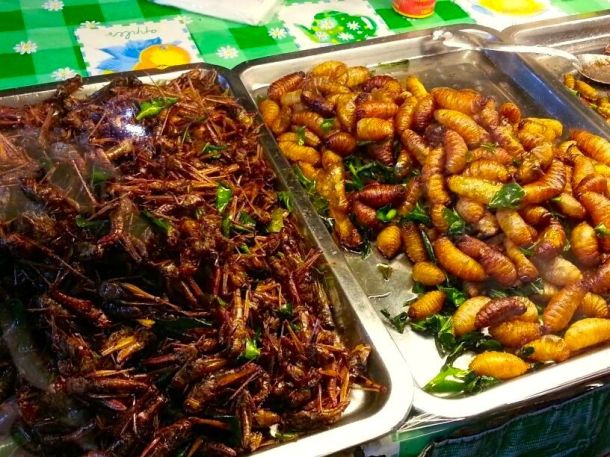 Still on the subject of food (no munchies no ride)!  The Pavilion Hotel may no longer be elegant, but they do start serving breakfast at 5am.  So we had no problem fueling up before our 6.15 am departure from the hotel.  We rode out into a drizzle, which eased by the time we reached the ferry.

We got to the start outside the Haad Kaew Resort just as it started drizzling again.  The rain got steadily heavier and heavier.  By the time we were 30 km / 20 mi into the ride it was pouring.  So much for wearing sandals the day before to keep our shoes dry.

We rode in the rain for the first third of the ride, which took us north along the coast before turning inland and then back south.   Highway 408  is excellent for cycling.  The road surface is amazingly smooth.  Not a bump or a pothole to be found.  Despite the heavy rain there was rarely any standing water on that road.

The rural road inland is another story.  There are lots of bumps and potholes.  The rain made riding quite tricky because standing water often hid holes in the road surface.  Keat hit a pothole and has seven stitches in his elbow to show for it.  He won the hard man award for cycling some 90 km / 56 mi with a gashed elbow, a scraped knee and a bruised hip. 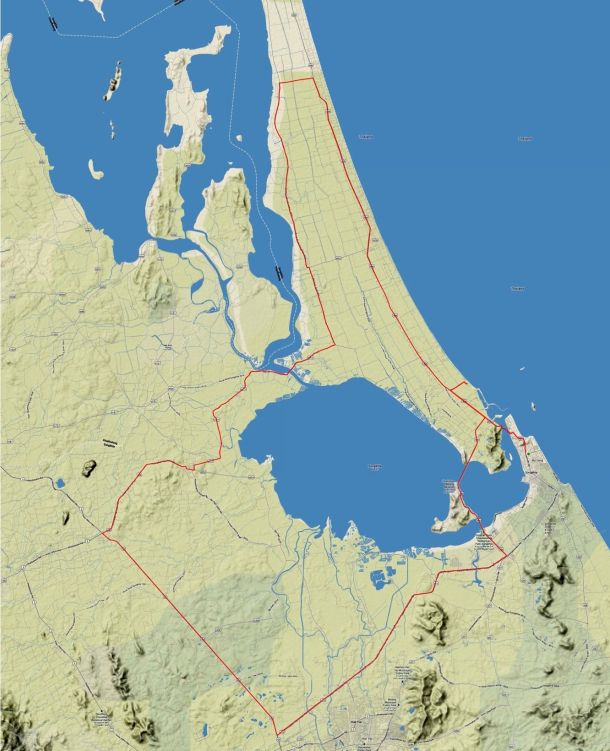 Keat’s mishap aside, we were all glad that it rained.  The rain kept us cool.  By the time we made our first stop at the halfway point the rain had ceased however, and the sun was peeking through the clouds.

Mark and Chris are all smiles here.  The heat and the headwind in the final kilometers wiped those smiles off their faces. 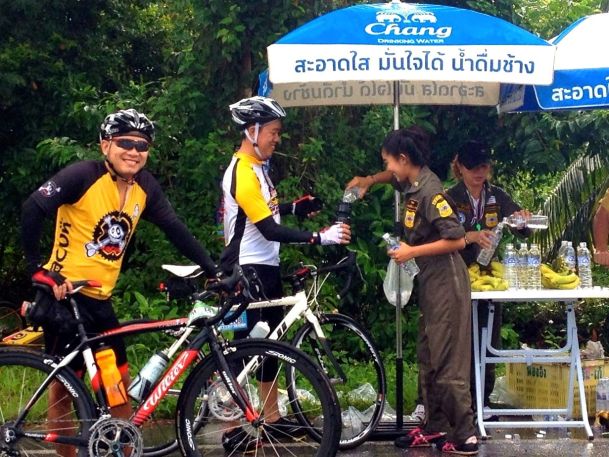 We made a stop at a 7-11 in Khuang Niang.  Keat caught up with us there, which is when we learned of his accident.  Marvin had stopped early on for what we thought was a loose quick release skewer.  He actually had a flat.  It took him a long time in the pouring rain to replace the tube.  We didn’t see him again until the finish.

I bought chocolate milk and chocolate chip cookies.  The others bought food and drink also.  While we were standing outside the 7-11 consuming our purchases a procession came by.  My guess is that it was a wedding procession because of these money trees in their gold pots. 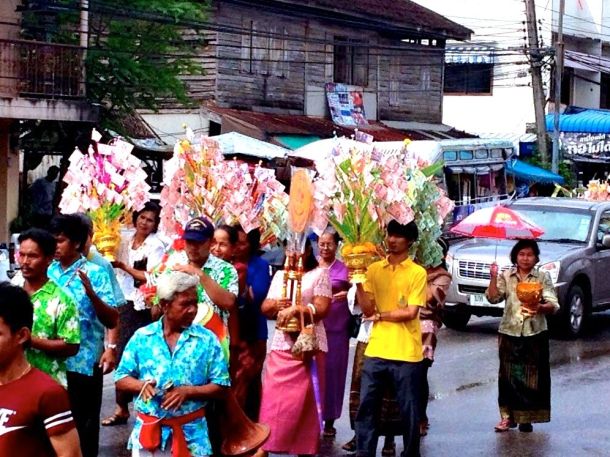 Not long after the stop at Khuang Niang we turned left onto Highway 43.  The road surface improved markedly.  More importantly there was a wide shoulder to ride on so we could stay as far as possible from the speeding cars, lorries and buses.  It helped that the highway was arrow-straight for a good 20 km / 12 mi.

We made a final stop at a petrol station just after the right turn off Highway 43 and onto Lopbun Ramesuan Road.  We needed a rest room.  While we were there we took advantage of a water hose to rinse the sweat off our faces, to soak our hair and jerseys in an effort to cool down, and to wash the sand and mud off our bikes.

The highlight of the ride for Mark and I came a few kilometers after we made the left turn back onto Highway 408.  There was quite a strong headwind as we rode over the first part of the Tinsulanonda Bridge.  We had our heads down, pushing against the wind as we rode past Wat Pranon Laem Pho.  So we didn’t fully appreciate the large reclining Buddha that the temple is famous for.

About halfway across Ko Yo Island something like this rolled past us. 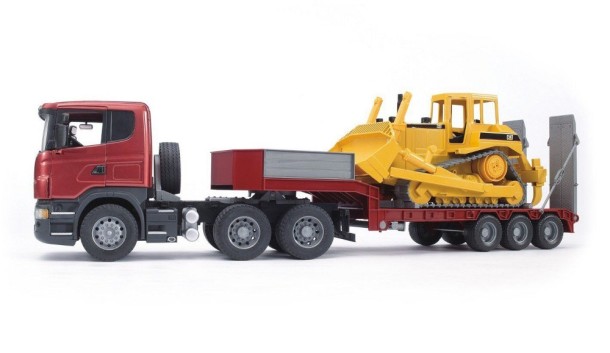 Mark and I had drafted a lorry once before.  What a blast that had been!  This was too good an opportunity to pass up.  Especially given the headwind we were battling.

We swung to the right and accelerated into the still air about 1 meter / 3 feet behind the lorry.  For the next 5.5 km / 3.4 mi we averaged 54 kph / 33.5 mph.  As we came off the second part of the Tinsulanonda Bridge and onto the mainland we were exceeding 64 kph / 40 mph.  What a treat to run out of gears on the high end of the cassette for once.

Sadly this low-loader wasn’t going all the way to the Haad Kaew Resort.  We waved our thanks to the driver as he honked and turned to the right.  Then our normal cycling speeds were resumed for the last 7 km / 4 mi to the finish at the beachside resort. 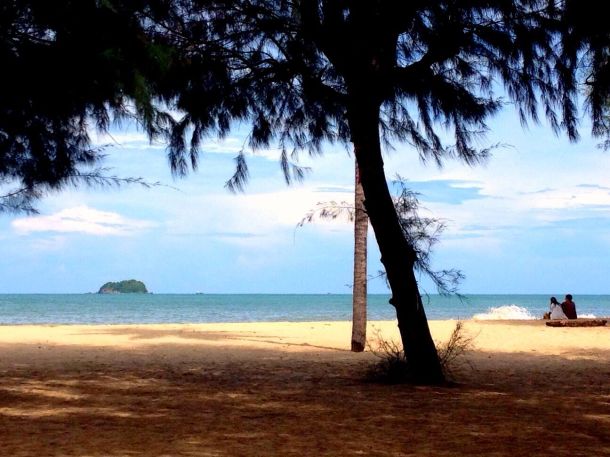 I had expected to wait for the rest of the KESAS Kruisers and then ride back to our hotel.  Instead Mark and I were ushered into an air-conditioned hall for a sit-down lunch.  Thai green curry, stir-fried vegetables, spicy tofu, chicken in soya sauce.  All good, and all much appreciated.

Before long our group was together again.  As we ate we were were entertained by a singer, and a group of Thai traditional dancers.  That was followed by a lucky draw.  We all had our numbers in our hands and hope in our hearts, but none of us left with a prize.

We did have a certificate and a finisher’s medal to show for our efforts. 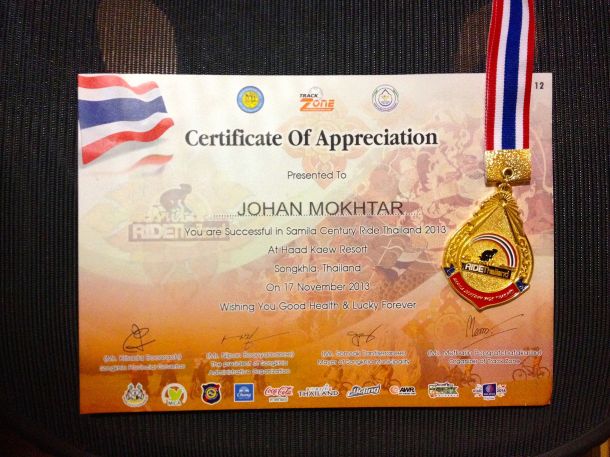 And memories of a wonderful trip with a first-class group of friends, and a very well-organized ride.  I think we will be back in 2014. 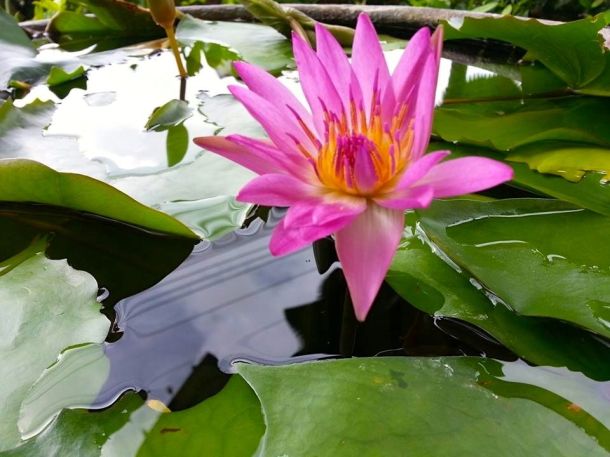