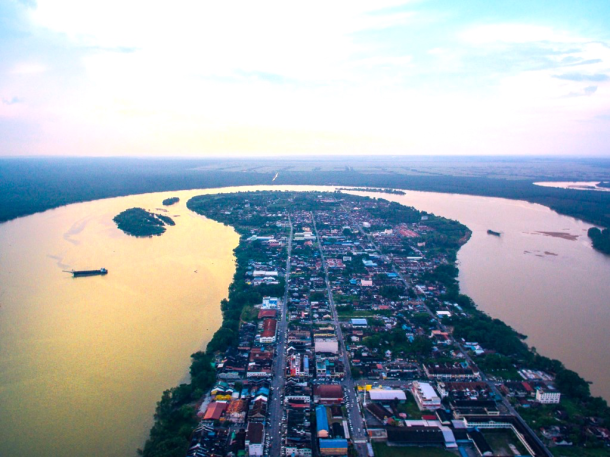 Teluk Intan extends into an oxbow meander of the Perak River.  The Yew Boutique Hotel is the blue and white building to the left, about halfway up the spit of land.

This is the view from the hotel rooftop. 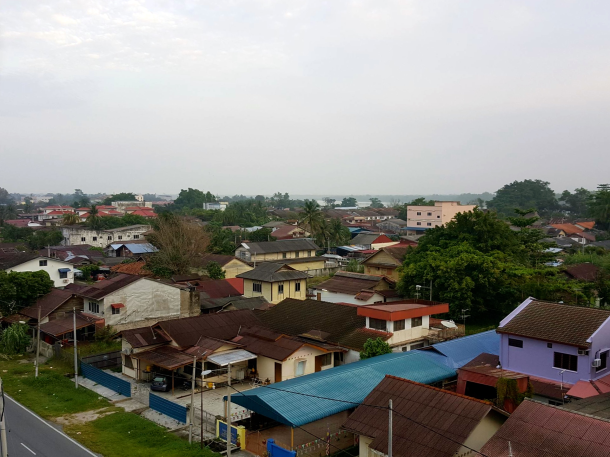 The hotel is bicycle friendly, with a Cyclist Corner in the lobby.  Bicycles in rooms?  No problem. 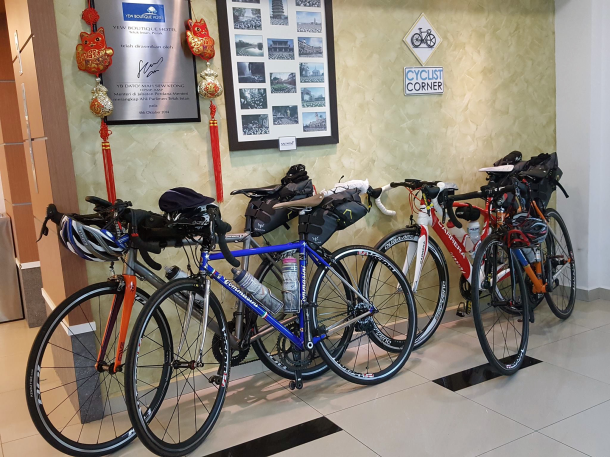 After breakfast in the hotel, we were on the road at just after 8.00am.  It looked and felt like it would be another roaster of a day as we made our way out of Teluk Intan.  But after 25 km / 15.5 mi it became overcast, and consequently a little cooler. 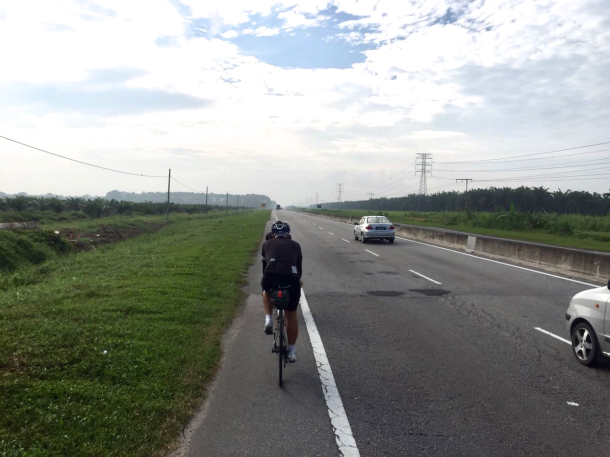 The cloud cover was not total, so weather vacillated between being overcast and being sunny.  Which kept the temperature relatively high, but thankfully it never got to the boiling hot levels of the previous day.

Despite feeling warm, we were comfortable enough to make good time to Sabak Bernam, where we made our first stop.

The fried egg, sausage, baked beans and toast breakfast at the hotel had been burned through, so we had brunch at Restoran Ammin Maju.  Roti telur, thosai, and lots of teh tarik and iced Milo.

The sun continued to play with us, alternately toasting us and retreating behind the clouds, as we made our way through Sungai Besar.  Sticking to our schedule of a stop every 30 km / 19 mi, we pulled into the PETRONAS station at Sungai Haji Dorani.  We already had 57 km / 35 mi in the bank.

I wasn’t the only one who had started out in the morning feeling dehydrated.  Despite drinking lots and lots during and after the previous day’s ride, I hadn’t replaced all the fluid that I had lost to perspiration.  All of us commented on how little we had in our bladders through the night and into the morning.

No surprise then that dry mouths and empty bottles signalled the need to stop after 90 km / 57 mi.  We had been looking for a cendol stall.  We came upon a few.  All were closed.

The cendol shake was however cold and wet, and everything is improved by a dollop of ice cream.  So down it went. We had been watching the sky since leaving Sabak Bernam.  There were rain clouds to the east, and at one point we thought the precipitation would come our way.  It never did.  The skies continued to alternate between overcast and sunny.  It never got as hot as it did the day before, but we were riding faster, averaging about 27 kph / 17 mph.  Thus we were sweating a lot.

We decided against stopping for lunch, or for another visit to the coconut water stand, in Kuala Selangor, but we did need to rest and refill water bottles at the PETRONAS station there.

We were more than halfway home, and we were moving onto roads which we had ridden many times.  Interestingly, the state of the roads was better coming south.  Even the stretch near Sabak Bernam was less rough on the southbound side.

Perhaps spoken a bit too soon.  Mark had a pinch flat as we made the left turn onto Jalan Kuala Selangor.  The Caltex Assam Jawa station was a convenient place for Mark to sit down while changing his inner tube.  And for me to have an iced lolly! 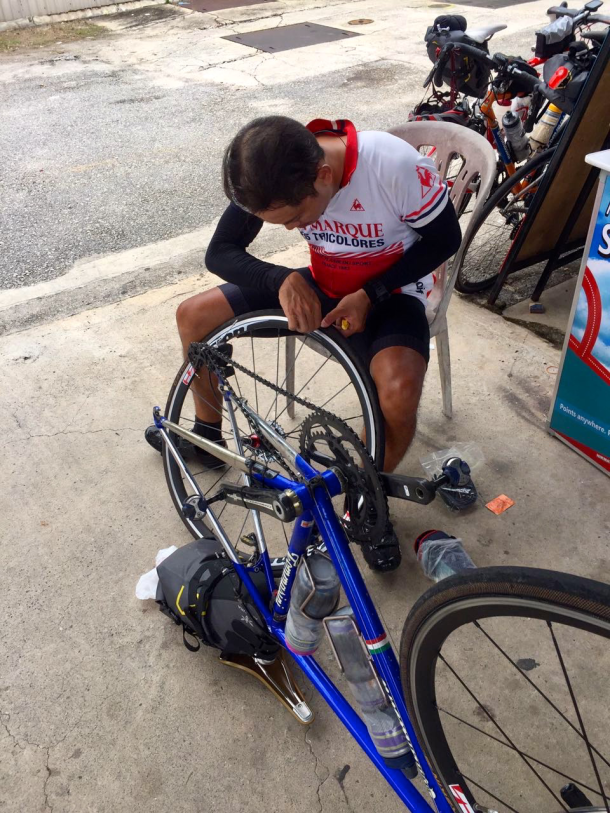 Once we got going again we were heading toward the rain clouds.  By the time we got to the entrance to the LATAR Expressway, the sun was well-hidden by the clouds.  Which was a very good thing.  Up to that point the route had been pan flat.  Now there were some hills to ride over along the LATAR Expressway and the rest of the way back to Petaling Jaya.

It was about 2.45pm.  Often the hottest time of the day in these tropical parts.  On this day it was just over 30° C / 86° F.  Very nice.  We were able to stay cool as we cruised over the hills.  So cool that we didn’t need to stop as planned at the Kundang Timur R&R.  Instead we carried on into Kampung Melayu Sri Kundang, looking for a stall selling banana fritters, cendol and the like.

We found Cendol ABC Setia across the road from Tasik Biru Kundang.  Exactly what we were looking for.  Cendol, banana and cassava fritters, and prawn fritters. 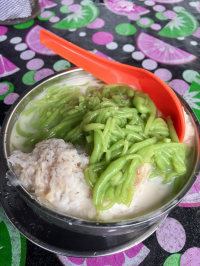 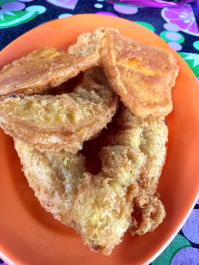 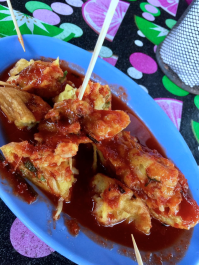 The last 30 km / 19 mi of this ride were much more comfortable than the equivalent kilometers the day before.  We weren’t feeling beaten up by the roads and the heat.  We made a final stop at the PETRONAS station in Kuang to fill our bottles.  Then enjoyed a relaxed ride back to Petaling Jaya.

Once again I had a lot of fun, laughs, and good eats, with great friends for company.  Thank you Lay, Marco and Mark for a wonderful bike tour.  Let’s do another one soon.