Marco, Mark and I attempted a ride to the KTM Komuter station at Tanjung Malim.  We started from Mark’s house in Taman Mayang Jaya.  We followed our usual route toward Rawang via the Guthrie Corridor Expressway.  Our plan had been to get onto the LATAR Expressway and ride into Rawang from the south east.

Our new plan was to stop at our favourite noodle shop in Kundang, and weather permitting, get to Rawang from the south west.

It was spotting with rain when we had finished our noodles.  We took a chance and rode toward Rawang anyway.  The drizzle soon stopped, but it had already rained quite hard, and the roads were very wet.  Why do I always have a white jersey on when we hit wet roads?

We rode through Rawang and onto Federal Route 1.  Federal Route 1 is the oldest federal road in Malaysia, as is one of the nation’s earliest public roadways ever constructed.  It runs the length of the Malay peninsula, from the causeway into Singapore up to the Thai border in the north.  As we left Rawang toward Serendah the road dried up.  We had pleasant, overcast riding conditions.  The skies were gloomy, but we thought we had dodged the rain.

Not so.  The rain caught up with us while we were stopped at the Petron station in Rasa.  We waited at the petrol station for about fifteen minutes in the hope that the rain would stop.  It did not.

So we rode out into the rain.  By then the conditions were miserable.  Federal Route 1 is a busy road.  We were riding through rain and the spray thrown up by passing vehicles.  We decided to stop at the nearest KTM station, which was 8km / 5mi away in Kuala Kubu Bharu.  Tanjung Malim was a further 20km / 12.5mi away.  Too far given the very wet conditions.

We bought a ticket for our bikes, and tickets for ourselves, and sat at the station with a drink in our hands, waiting for the train.

The towns along the KTM Komuter line to the north of Kuala Lumpur are smaller than the towns to the south of the city.  Which may explain why there are less people on the trains going south from Kuala Kubu Bharu than there are on the trains going north from Seremban.  We shared the carriage with only two or three others all the way to our stop at Sungai Buloh.

We hopped off the train at Sungai Buloh, which was the closest station to Taman Mayang Jaya.  By then the rain had stopped, and the sun was out.  We had to negotiate some busy roads for the first few kilometers, but once we were in Kota Damansara the traffic was less fraught.

It was lunchtime when we got to Aman Suria, which is the neighbourhood adjoining Taman Mayang Jaya.  Patty & Pie is in Aman Suria.  Their burger lunch special hit the spot. 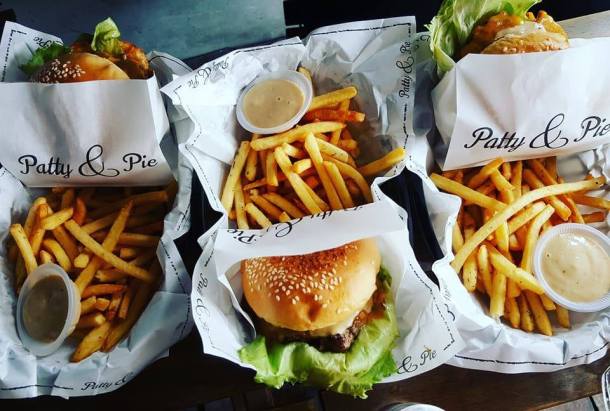 Another overall enjoyable ride (bike) and ride (train), despite the rain.

Seven of us turned up at D’Bayu for a mystery ride.  Marco had a surprise route for us.  The first 25 kms was the standard run to the Kundang exit on the LATAR Expressway.  This time, instead of turning left toward the Kundang Lakes Country Club, we turned right toward Kampung Baru Kundang.

Uppermost on everyone’s mind was to find a place to eat.  We assumed that there would be some restaurants in the village.  We didn’t expect to find a really good one.

Sin Loong Kee Noodles is tucked away off Jalan Pekan 1, hidden behind all the cars parked in front of it.  We quickly realised that Sin Loong Kee must be a special place.  Almost all the tables inside the restaurant, and outside in the car park, were full.  People were also queuing up to buy noodles to take away.

Some research tells me that the 60-year-old Sin Loong Kee shop has been run by Chin Yoke Wai, 34 and his family for three generations since his grandfather opened the restaurant.

To our initial dismay, the pile of noodles in the glass case quickly disappeared as the takeaway orders were filled.  To our relief, replenishments regularly came out of the back of the shop.

We sat at the last empty outdoor table and waited expectantly for our orders to be taken.

The family that runs this restaurant would not be rushed out of their routine.  When it was our turn to be attended to, one person took our drinks order, and another our food order.

This was home style cooking at its best.  The noodles were made on the premises.

As were the yong tau foo and the fishballs to accompany the noodles.

The coffee was good too.  Comparable to the coffee at Pun Chun.

No time for small talk!

We will be visiting Sin Loong Kee again.

We didn’t just eat.  We did more riding too.  We cycled toward Batu Arang, through the Selangor Fruits Valley area, and on towards Batang Berjuntai. Then we headed south to Ijok and the LATAR Expressway back to Bukit Jelutong.

I had a flat tire on the road near Batu Arang.  Cedric has never changed an inner tube before, so this was the chance for a lesson.  Since there was an audience, of course things went wrong.  While putting the rear wheel back in the dropouts I managed to jam the chain between the small cog and the derailleur.  The only way to free the wheel was to remove the quick release skewer.  Not the best demonstration for Cedric. 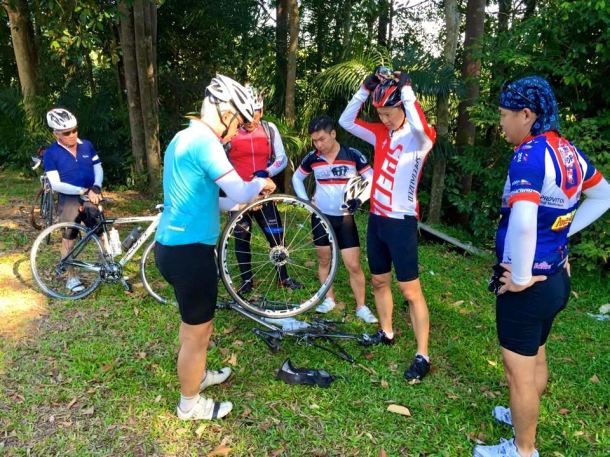 It was a good thing there was a shady spot by the side of the road.  It was a hot day.  It certainly did feel like 38° C / 100° F at noon.  We had to stop at a few petrol stations and R & Rs to rehydrate and cool down.  But it was a good ride, despite the heat.

We hadn’t planned on such a long one though.  About 110kms in all.  Surprise!