Much of the west coast of peninsular Malaysia had been blanketed by haze for more than a month leading up to the Melaka Century Ride 2015.  The wind was your friend or your enemy, either bringing more haze with it, or clearing the skies.

In mid-October the wind became an enemy.  An area of low pressure in the west Pacific, caused by typhoon Koppu and typhoon Champi, was pulling air across Sumatra and over the Malaysian peninsula.  That air brought with it smoke from the many forest and peat fires in Sumatra.

Would the Melaka Century Ride 2015 happen?  This skyline in KL during the days leading up to the event had the organiser issuing an assurance that the ride would proceed as planned.

I had my doubts.  The air looked pretty murky all the way from Kuala Lumpur to Melaka on Saturday afternoon.

Nevertheless, 3,087 optimistic, or foolish, or both, riders turned up at the start line at Dataran Sejarah Ayer Keroh on Sunday morning.  Way more than I had expected.  Our faith paid off because much of the haze had cleared overnight.  We didn’t have clear skies, but the Air Pollution Index had fallen enough that the organisers did not have to shorten the route for the sake of the health of the participants.  That was the good news.

The bad news is that we all had to wait as the start time of 7.00am came and went.  VIPs turning up late to officially start events is one of my pet peeves.  We got underway at 7.20am.  The route this year was counter clockwise, with a checkpoint at the halfway distance near Batang Melaka.

These riders were at the sharp end of the race.  And a race it was for the fastest, with cash prizes for the winners and top finishers in the various categories.  How fast did you have to be?  My friend Khairi, in the black kit, finished in 4 hours and 15 minutes.  Fast by most standards for a 160km / 100mi ride, but still 38 minutes behind the winner of the Race category.

I ran into, well not literally ‘ran into,’ an ex-colleague and friend just 5 km into my ride.  Farid and I spent the next 120 km / 75mi riding together.  It was very pleasant to be able to chat with Farid. 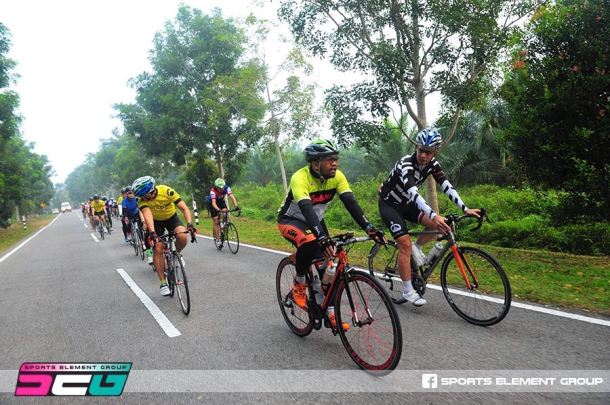 It was also nice to be able to introduce Farid to the coconut water stall I had stopped at with the Flipsiders during last year’s Melaka Century Ride.  As luck would have it, this year’s route took us right past that same stall. 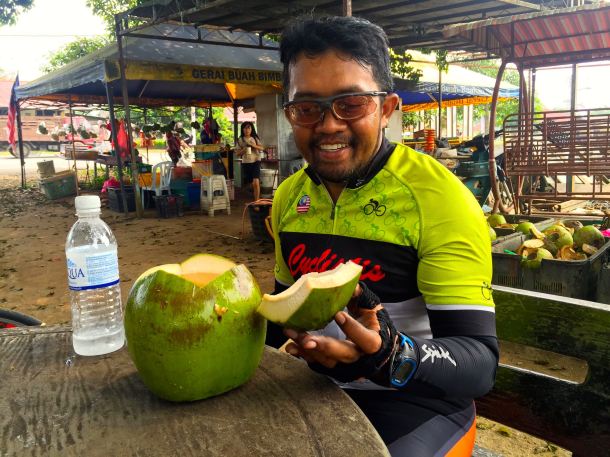 The young coconuts were just as fresh, and the water just as sweet and as cold as they had been last year.

One thing that was a lot better this year was the rest stops.  Last year half of the rest stops ran out of water very early on.  This time they all had lots of water, and in some cases bananas too.  This particular stop even had a water tanker on hand so that they could shower passing riders with cool spray.

Another outstanding element of this event was the marshalling of the route by the police and civilians on motorbikes, and more police and volunteers at all the intersections and junctions.  I didn’t have to stop for a traffic light or for any vehicles during the entire ride. 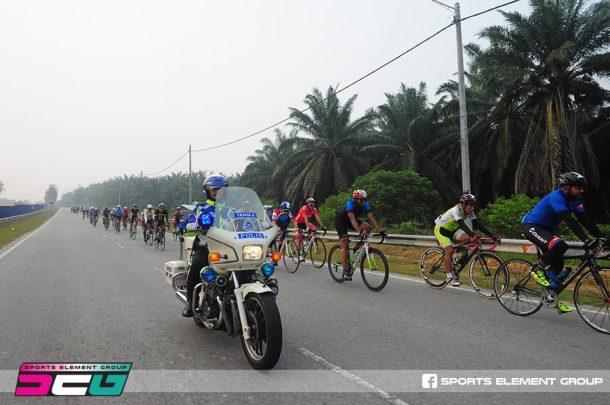 There were also lots of volunteers in vehicles, ready to assist riders in trouble.  Of which there were many.  About 1,000 who started did not finish the ride.  I am sure the still slightly hazy conditions caused some participants to cut short their ride.  The ride profile, which put about 1,700 meters / 5.600 feet of climbing into the route, certainly played a part too.

About 2,000 cyclists, including Farid and I, made it to the finish.

Which for me meant being able to pour as much ice blended mocha and ice blended cappuccino down my throat as possible.  It hadn’t been a particularly hot day, but I was still happy to be in the shade with a very cold drink in my hand.

Of course making it to the finish also meant getting another medal to add to my collection. 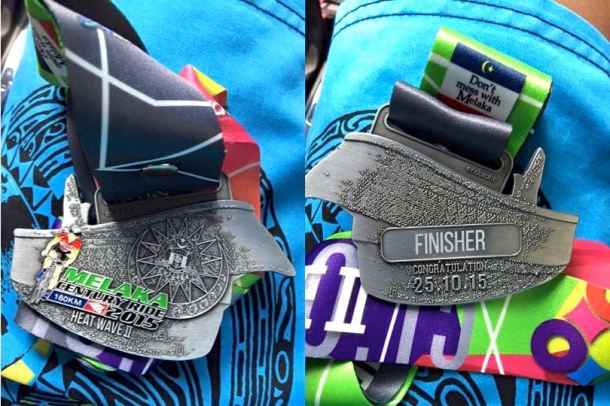 Michael K couldn’t travel to Malaysia and ride with me as planned.  I hope all is well with you and yours Michael, and this is will be waiting for you when you do make a trip to Kuala Lumpur.