The Johor Masters Century Ride appealed to Keat and I.  For the first time we were in an age group that suited our ages.  55 years and above.  We managed to convince Marco and Mark to sign up for the ride as well.  They were in the 35 to 39 and 40 to 44 categories respectively.

It is a 400km trip to the Lotus Desaru Beach Resort, the official hotel for the event.  So Mark and I arranged to meet at the Seremban R&R, after which I followed Mark’s car down the highway, keeping an eye on the two bicycles on his roof rack.

Here we are with Mark’s mother-in-law and his daughter, having a teh tarik for the road. 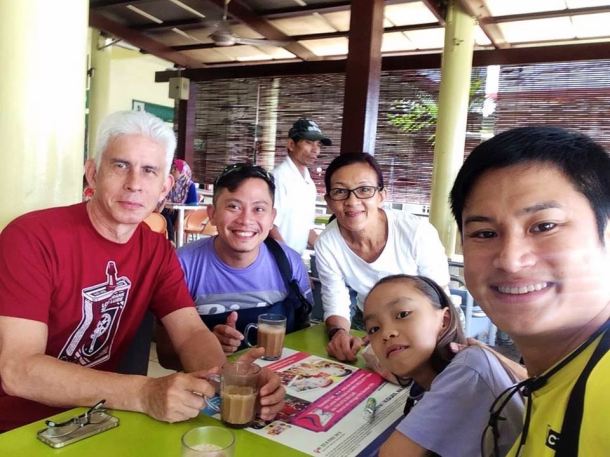 Keat and his wife were already at the resort.  We piled into his pickup truck that evening for the 20km drive to Kampung Sungai Rengit.  We were on the hunt for dinner.  We found a good one at the Beautiful Village Seafood restaurant.

You would have thought that all that food would have kept us going for a long time.  But we were among the first at breakfast at 5:00 am.  The resort laid on an impressive spread for all the cyclists staying there.

By 7:15am were were ready to start the ride.

In a change from recent experience, we got going only ten minutes past the scheduled start time of 7:30am.

The route was an anti-clockwise elongated loop from the Lotus Desaru Beach Resort at Bandar Penawar north along the coast to Tanjung Sedili, then west to Kampung Mawai Baharu before turning southward to Kampung Sungai Rengit.  Finally the route followed the coast back up to the Lotus Desaru.

We Flipsiders received a topography lesson at the Melaka Century Ride.  I certainly thought of the state of Melaka as being relatively flat.  None of us anticipated just how hilly it is between Masjid Tanah and Jasin.

We got another topography lesson at this event.  The ride started with a climb.  Followed by another, and then another.  Seven or eight in the first ten kilometers.  Then it was flat for about ten kilometers, before more rolling terrain for the next twenty kilometers.

We were at the start of a relatively flat 20 kilometer section when we saw the photographer from Attaque.

Keat was not far behind.

The 100 hilly kilometers that came next took their toll.

Mark, Marco and I took advantage of a roadside air tebu, or sugar cane juice, stall for a drink and a rest.

The next time we took a break, it went a bit wrong.  At the 115 km mark we pulled into the first petrol station we came across on the route.  Everything started out well.  That Petronas station had a freezer cabinet full of Magnums.  And air-conditioning.  And chairs. 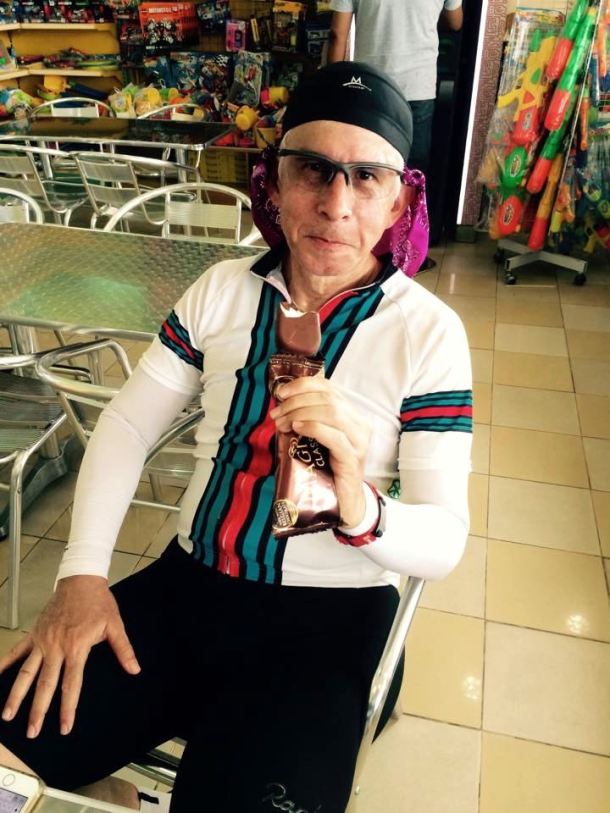 After we had cooled off we got back on our bikes, turned left and followed a few other cyclists onto the road.

We were very surprised to cross the finish line a few minutes later.

The sub five hour finishing times were the giveaway.  We had only ridden 120 kms.  We should have left the Petronas station forecourt via the entrance and continued straight down the road, and not taken the exit onto the wrong road.

Having ridden across the finish line, we were given medals. 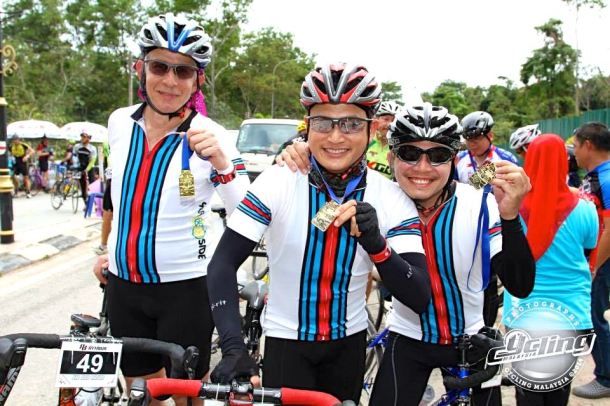 Despite the medals, we decided to go back the way we came, rejoin the route, and ride the full distance.  A decision we questioned 40 kms later. 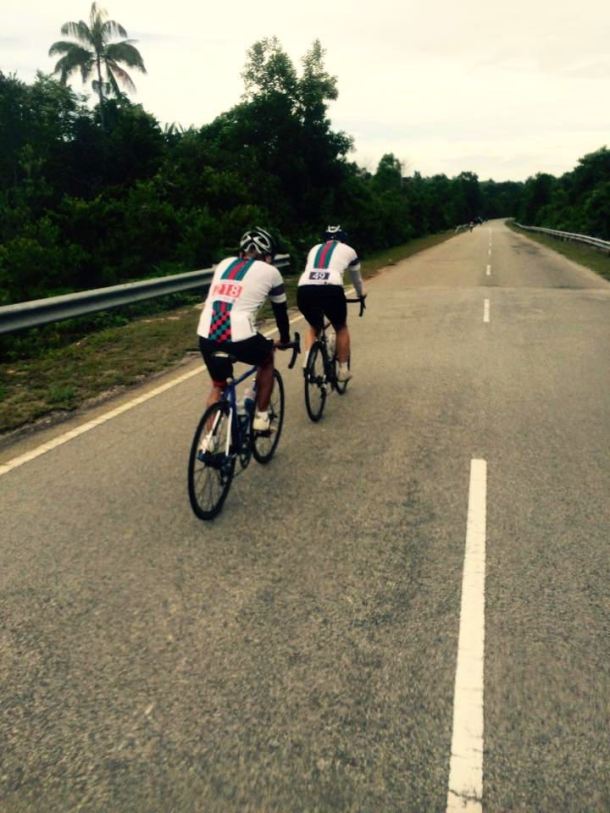 By the 160 km point we had caught up with Keat, who had not made the navigational error that we had.  Taking into account the extra 11 km we had ridden, we should have been less than 10 kms from the finish.

The seemingly incessant climbing had taken its toll on us.  As had the rough asphalt and poorly patched roads.  And the headwind.  Our water bottles were empty, and we were fading badly.

So our joy at spotting the “1 KM To Go” sign in the distance turned into despair when we got close enough to see that the sign actually read “10 KM to Go.”

We had 10 kms of this terrain to cover before we got to the finish line. 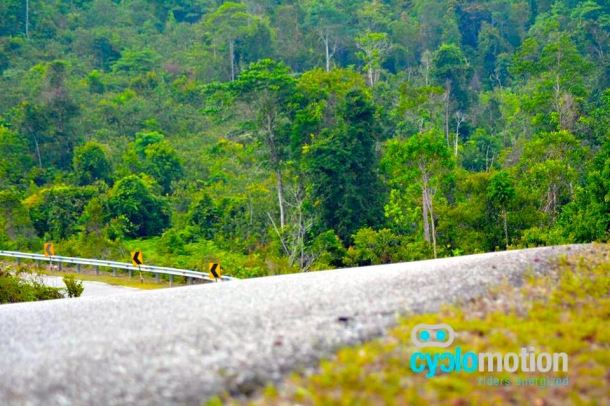 I am frankly surprised that I didn’t throw in the towel and jump into the broom wagon.  I think the same thought must have crossed the minds of my Flipsider friends.  The sight of Mark ahead of me provided just enough motivation to keep going.  Keat said that the sight of me up ahead did the same for him.

We literally forced ourselves kilometer by slow kilometer up those  ☹ ☁︎ ☢  last hills to the “3 KM to Go” sign, and then the “1 KM to Go” sign.  The ride had started with a climb.  So thankfully the final 500 meters to the finish was downhill.

Hot and tired, and happy to be done.

The JMCR 2014 was one of the tougher rides we have done.  We have another cycling adventure to talk and laugh about.  We added another medal to our collections.

We learned about our capacity to persevere.  And we now know from first-hand experience that Johor is not flat!