I had a taste of what was to come when I went to the Bike Expo New York at Pier 36 to pick up my Tour packet and rider vest.  I went on Friday morning, assuming that I would beat the crowds later in the day and on Saturday.  Fail! 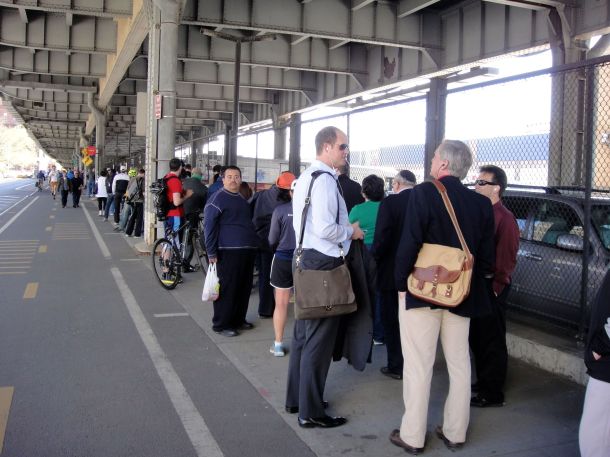 Fortunately the queue started moving ten minutes after  I joined it.  Once inside the Expo building we split by registration number and it didn’t take long to get through the identification check and to collect my packet.  I wandered around the exhibitor stands, determined to keep my cash and credit card in my wallet.  I succeeded, except for pulling out $5 for a sticker in support of a benefit fund for the victims of the Boston Marathon bombing.

I spent a bit more for a present for guess who?

I didn’t bother to pick up most of the swag on offer.  Key chains, can cooler sleeves, pens, bags, that sort of thing.  I did accept edibles though.

By a stroke of good fortune I was allocated the earliest of the three staggered start times.  7.45am.  The other start times were 8.30am and 9.15am.  I thought it best to try and get toward the front of the 10,000 or so other riders who had the same start time as I did.  So I got to the start at about 6.30 am.  There weren’t many people ahead of me nor behind me.

An hour later and I had been joined by just a few more riders.

It was an unseasonably cold and windy Sunday morning.  New Yorkers were literally hunkered down to get out of the wind.  You can’t tell from the photograph but there were goose bumps under those tattoos.

Underdressed yet again, I resorted to ducking into a porta-potty to get shelter.

Fortunately for me the ride started on time.  Unfortunately for me the first 6 km / 4 mi of the ride were through the concrete, steel and glass canyon that is 6th Avenue.  Where no sunlight reaches the street at that hour of the morning.  I shivered and shook, wondering why I hadn’t thought of waiting in the warmth of the apartment building I was staying in and joining the ride as it rolled past the front door.  It was not until I got to the open terrain of Central Park that I could aim for patches of sunshine, looking for any warmth at all.

By the time I got to Harlem in northern Manhattan I was lukewarm.  Warm enough at least to get into the upbeat mood generated by the gospel choir standing on Adam Clayton Powell Jr. Boulevard, belting out a rousing rendition of “Oh Happy Day”.

The ride route crosses five major bridges among the islands of New York City.  The Madison Avenue Bridge was the first.  It connects the island of Manhattan to the Bronx, which is the only bit of mainland America in New York City.

So as not to paralyze road traffic in New York City for the entire day, the city conducted rolling street closures.  I was among the group that got to Astoria Park before Shore Boulevard and 14th Street were closed to traffic.  The park is at the 18 km / 11 mi point of the ride.  As good a point as any to eat something.  The bridge is the Robert F. Kennedy, one of the New York City bridges that we did not ride across.

As we left Astoria Park we had the Hell Gate Bridge over the East river and behind us.  The gentleman to my right was on an Elliptigo.  I saw one during the BP MS150 ride too.  Looks like hard work! 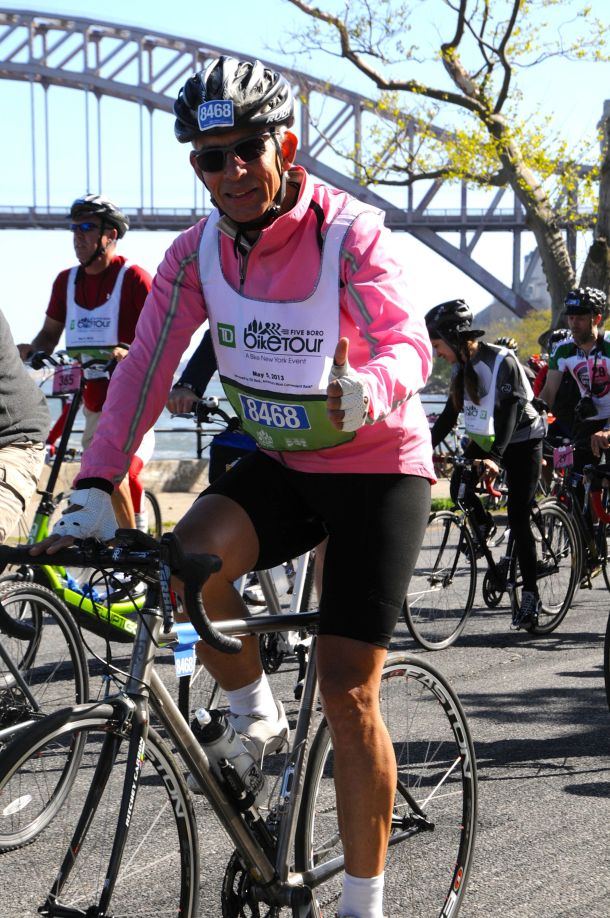 The Pulaski Bridge carried us over Newton Creek between Queens and Brooklyn.  Brooklyn is the fourth of the five New York City boroughs that the ride took us through.  The Brooklyn leg generally followed the East River, past the Brooklyn Bridge and onto the Gowanus Expressway where the Hudson River empties into the Upper Bay.

Talk about saving the best for last.  To get from Brooklyn to the fifth borough of Staten Island we had to cross the Verrazano-Narrows Bridge.  When it opened in 1964 this was the longest suspension bridge in the world.  Just over 2 km / 1.3 mi from end to end.  The only other people allowed to cross this bridge without using a motor vehicle are participants in the New York City Marathon.  The crossing was spectacular, even on the lower deck. 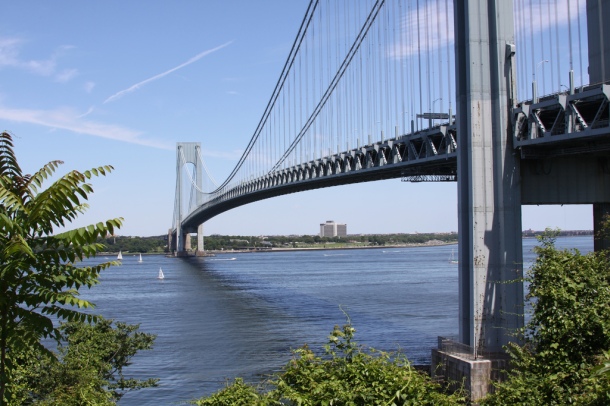 The Staten Island end of the Verrazano-Narrows Bridge is at Fort Wadsworth.  Where the finish Festival was.  I had managed to get to the Festival ahead of the majority of the other riders in my start group.  So there weren’t many others around us as we took in the sights at the finish and waited to be released to ride the final 5 km / 3 mi to the St. George Terminal of the Staten Island Ferry.

Many of the cyclists already at Fort Wadsworth were veterans of this event.  One gentleman was riding it for the eleventh time.  It became clear from talking to the experienced ones that getting to the finish quickly was key to getting back to Manhattan at a reasonable time.  The waiting time for the ferry increases geometrically as more and more riders get to the Festival.  It could be 4pm or later before the riders at the back of the group got on a ferry.  So I was happy to be on a ferry at 11.30am.  My only regret was that I chose to sit on the wrong side of the boat to see the Statue of Liberty as we passed Liberty Island. 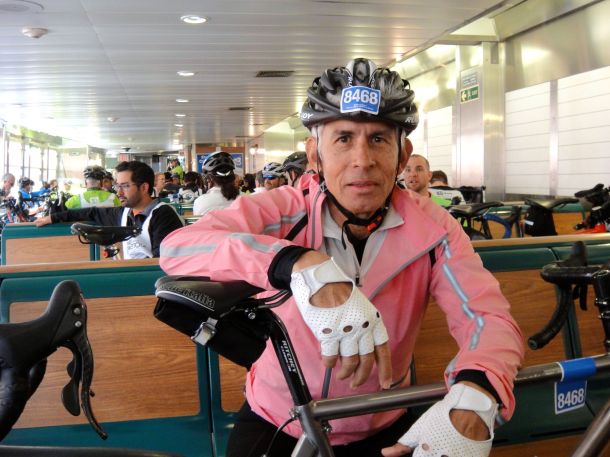 I had a great time on what has become an iconic ride in America.  It would have been just as appropriate if that gospel choir in Harlem had been singing “Oh, What a Beautiful Morning.”