Things to See on a Bike in the Netherlands: Public Art

It is not just windmills, cheese and tulips in the Netherlands.  The country is also a center for the visual arts, and has been since the 17th century.  Every town and city has at least one art museum.  The Dutch website Museum.nl lists 325 museums in the ‘fine arts’ category.

If you want to see a Rembrandt, a Vermeer or a van Gogh you will of course have to visit a museum.  (Click the arrow below to hear how the Dutch pronounce “Vincent van Gogh”).

Sculpture, on the other hand, is not confined to sculpture gardens like that at the Kröller-Müller Museum or the Museum Beelden aan Zee.  Public art is everywhere in the Netherlands.

Some is in a classic style.

This statue commemorates the many Maassluis residents who have lost their lives at sea. The inscription on this statue is from the poem “The Sea” by Antoine “Toon” Hermans, a noted Dutch comedian, singer and writer.

This memorial is in Hoek van Holland.  It is called “Channel Crossing to Life.”  It commemorates the 10,000 mainly Jewish children from Germany, Austria and Czechoslovakia, who were permitted to enter England without their parents and escape Nazi persecution.  Most crossed the English Channel to Harwich from Hoek van Holland.

This gentleman can be found in Delft. 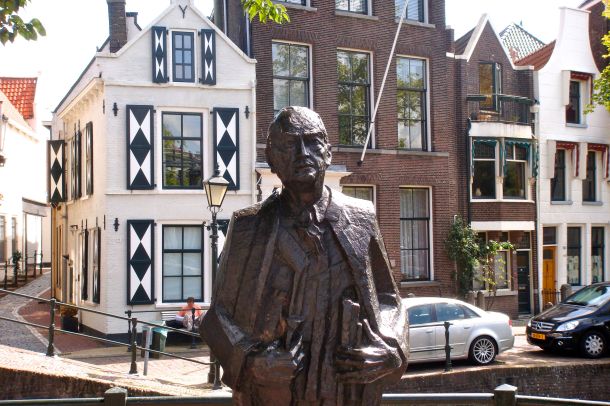 This fine fellow is watching the world go by in Leiden. 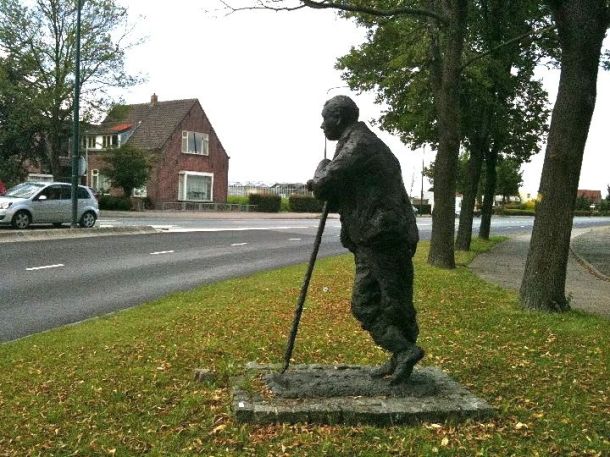 Some public art is in a modern style.

This statue is in Maassluis.

The Dutch equine industry is highly regarded in the Sports Horse sector, and particularly in terms of the standard of breeding and bloodlines. The equine industry in the Netherlands is worth more than Euro 1.5 billion per year.  This horse graces a field in Valkenburg.

I noticed Dick Tracey in Den Haag soon after I arrived.  It was much later before I discovered that the building behind him is occupied by a branch of the Dutch police.

I’ve never seen anyone lounging on this seat in Hoek van Holland. 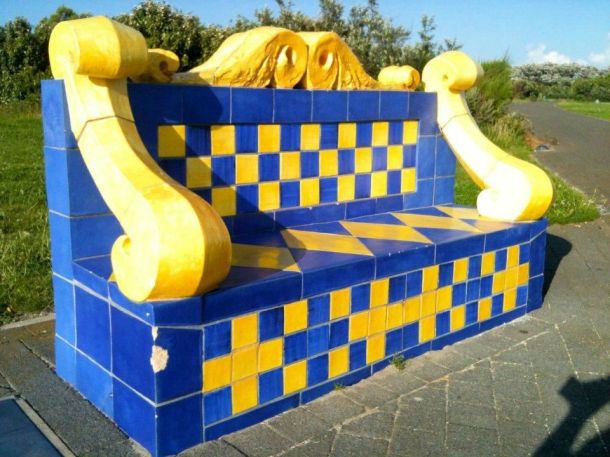 I am embarrassed to admit that I rode this route on the outskirts of Zoetermeer many times before I noticed this sculpture.

And some public art is just plain weird.

This melange of animals stands outside the Stadhuis in Den Haag.

This multi-headed creature is in the Grote Markt in Den Haag.

Somewhere near Rijpwetering.  Interpretations anyone?

Classic, modern or weird:  all are visible from your bicycle.