For example, A World of Languages.  Did you know that 146 living languages are used as a first language in Malaysia?

Unsurprisingly, there are lots of infographics to do with cycling.  This one plots the increase in the number of riders who completed the Rapha Festive 500 between 2011 and 2014.

More details about the 2012 and 2013 Festive 500s are presented in these infographics.

Some activity-tracking sites produce individualised infographics.  Strava is perhaps the most popular online cyclists’ community, with 203 million rides logged in 2017.

Each cyclist using Strava can generate a movie summarising their own achievements in 2017.  The closing graphic looks like this. 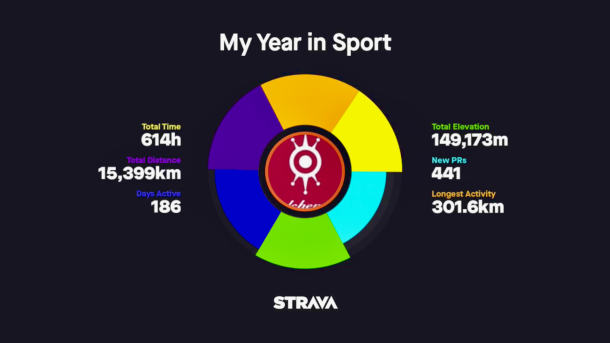 Strava also lets members generate heatmaps showing where they have ridden during a user-selected time period.  The color used highlight the routes changes from blue through purple to red, depending on how often that particular route has been ridden.

Third parties can access Strava’s data to produce their own infographics.  This is the heatmap produced by Jonathan O”Keeffe’s Strava Multiple Ride Mapper application.  It improves on the native Strava heatmap by using a wider range of colors to indicate ride frequency.

Veloviewer.com is another third-party application that pulls data from Strava to create individualized infographics.

One is a variation on the heatmap, supplemented with the date, distance, and elevation of each of the rides within the user-selected date range.

The more popular Veloviewer infographic, especially at year-end, is the one which tracks a variety of measures through the year. 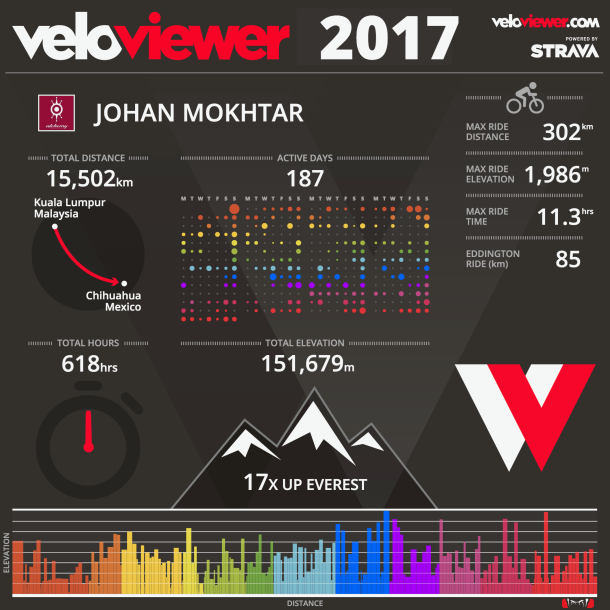 Madewithsisu.com uses your Strava data to produce art, rather than infographics in the strict sense of the word.

Like Veloviewer, the user selects the time period from which data is to be used.  Clocked represents each of your activities as a ring. They start when you started and finish when you finished.

The Multi-Route plots the route of all your rides for the chosen time period. 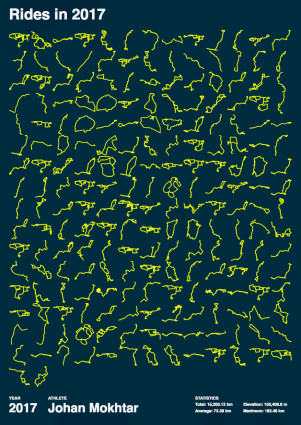 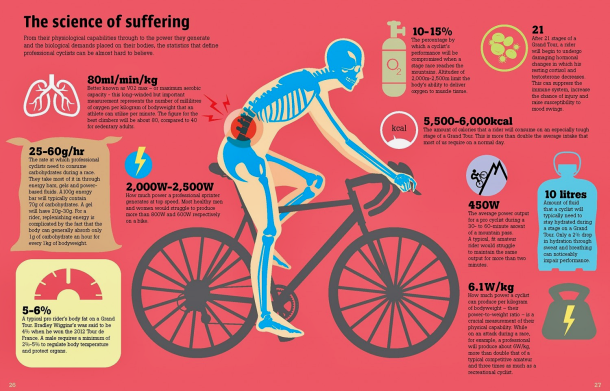 Graphic courtesy of Velopedia: The Infographic Book of Cycling

Graphic courtesy of Velopedia: The Infographic Book of Cycling

then Velopedia:  The Infographic Book of Cycling is the book for you.

The Art of Exercise

I enjoy studying graphic representations of data.  Like this map illustrating 59,036 routes between 3,209 airports on 531 airlines spanning the globe. 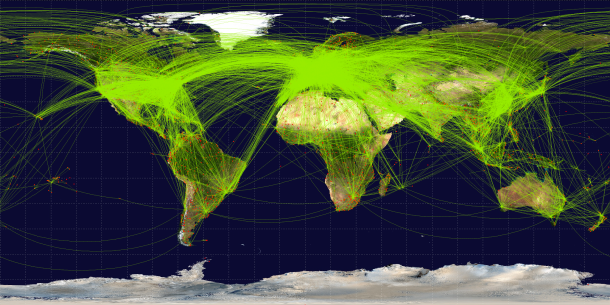 And this chart showing our galaxy’s relative size and position within the known universe.

The latest graphic to pique my interest is one created by Sisu.

Sisu takes your exercise data from Strava or Runkeeper, and turns that data into a print.  Sisu has been around since at least 2014.  Co-founder Peter Roome posted the first blog entry on the Sisu website in May that year.

I found out about Sisu last week, when cycling friends started posting their Sisu prints on Facebook.

There are a few designs to choose from on the Sisu website.  I like their original design that displays all the routes you covered between your chosen start and finish dates.  The plots of each route are sized so all of them fit on one page.  Thus the plots are not to scale.

Below are the routes I rode in 2010, the year I started cycling.  The first four rows show rides within and around Houston, Texas.  The rest of the routes are either loops or out-and-back rides starting from Den Haag, The Netherlands.  I moved from Houston to Den Haag in May 2010.

The rides range from 14.5km / 9mi (row two, far right, which was a short run from my Houston home to Hermann Park and back), to 124.5km / 77mi (row six, third from the left, which was from my Den Haag home to Kinderdijk and back). 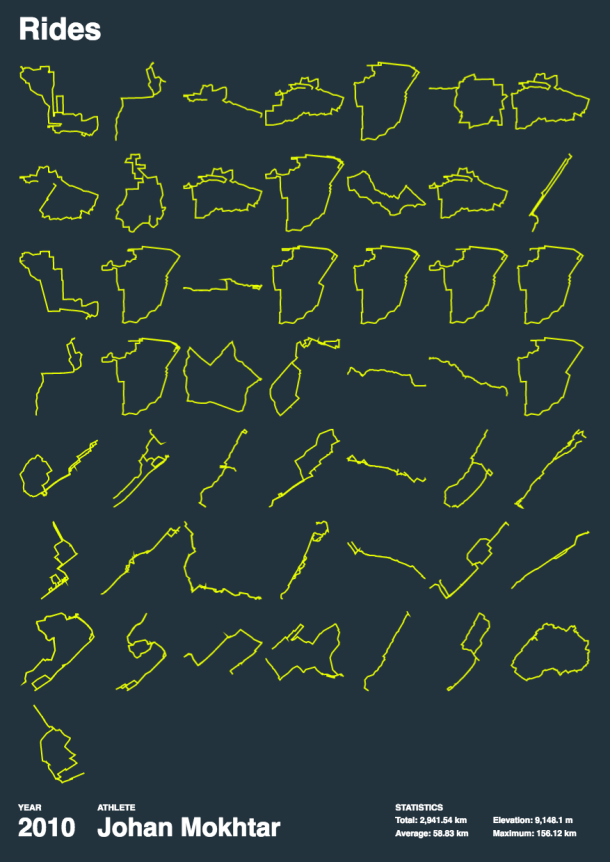 Even with only fifty rides in 2010, patterns emerge from the plots.  Most of my Houston rides were with the West End 6:30 group.  We rode a consistent route through the city every Tuesday and Thursday.  Most of those are shown on row three.

Den Haag is just a couple of kilometers from the coast.  You can’t ride very far west before you run into the North Sea.  So a lot of my rides in The Netherlands followed the coastline, either south-west or north- east from Den Haag.

As you lengthen the timeline, the Sisu plots of each route get smaller.  To ensure that, in this case, 885 routes fit on one page.

I think this print is a fascinating way to review my cycling history.  It is obvious from the graphic that my Kuala Lumpur friends and I spent an awful lot of time on the KESAS Highway in 2013 and 2014, as shown by all the horizontal, slightly squiggly routes in the middle third of the print.

There was a time when the Bukit Damansara route was popular.  This route

appears a dozen times in the centre rows.

Highlights stand out too.

.  It is not too difficult to find, about two-thirds of the way down the print.

.  It is in the fourth row from the bottom.

Of course, what my Facebook friends and I should be doing is paying Sisu for a print.

The print size is 12 inches by 16 inches for US orders, and A3 size (297mm by 420mm) for orders from the rest of the world.  The price for a physical print, or a digital download, are above.