Day 2 started with breakfast on the back patio of the St. Julien.  We were joined by Erin Carson, a strength coach to a number of elite athletes, including Mirinda Carfrae, the current Ironman Triathlon World Champion.  Erin had us on the lawn doing exercises with foam rollers and stretch bands as she explained the importance of flexibility in certain joints and parts of the body to ensure stability in other areas.

Then it was time to load our bags and bikes into the Cognoscenti vehicles for the 55km / 35mi drive to the Larimer County Fairgrounds in Loveland for the start of the USA Pro Challenge Stage 6 for men and Stage 2 for women.

Our Pro guest for the day was Craig Lewis.  Perhaps best known for being a part of the winning HTC-Highroad TT team at Stage 1 of the 2011 Giro d’Italia.

Cognoscenti provided us with passes to the start area and the VIP tent.  Those passes, and tagging along with Craig Lewis, allowed us to get close to some of the riders racing the USA Pro Challenge.

Lachlan Morton, with Craig Lewis in the background.  We chatted with Lachlan for a while, and would see him again as a Pro guest on Day 5. 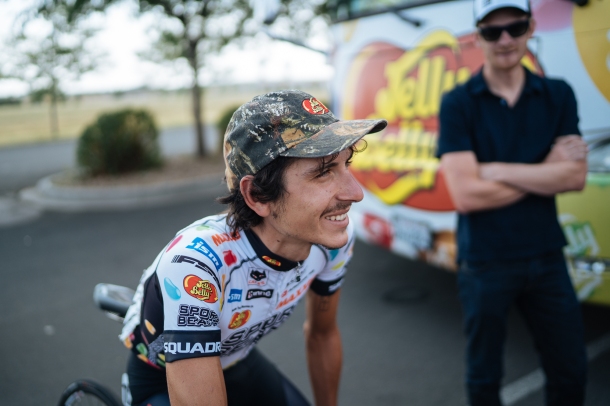 There was a bit of schwag to be had.  The pack of Jelly Bellys went to my biker chick.  I’ll use this custom koozie.

We also got a close look at the bikes the professionals were riding.  This Trek Madone 9-Series has the front brake integrating with the recessed areas of the front fork, allowing air to flow smoothly over the entire surface.  To allow the fork to turn, there are two little doors, called Vector Wings, on the front of the head tube that open up as the fork is turned, allowing the center-pull brake cable to rotate.

Just to show that some ideas have been around for a long, long time, this saddle with a central pressure relief cut out was on a vintage bicycle being displayed near the VIP tent.  The bicycle dates from 1898.

These guys look surprisingly relaxed ahead of a 165km / 102 mile stage race from Loveland to Fort Collins.

After the women’s and men’s races were flagged off, we started our 92.5km / 57.5mi ride back to Boulder.

Our route crossed the men’s race route, so we stopped to watch the riders zip past.  Kiel Reijnen of UnitedHealthcare Pro Racing was in the green Sprinter’s jersey.  A jersey he kept all the way to the finish of the race. 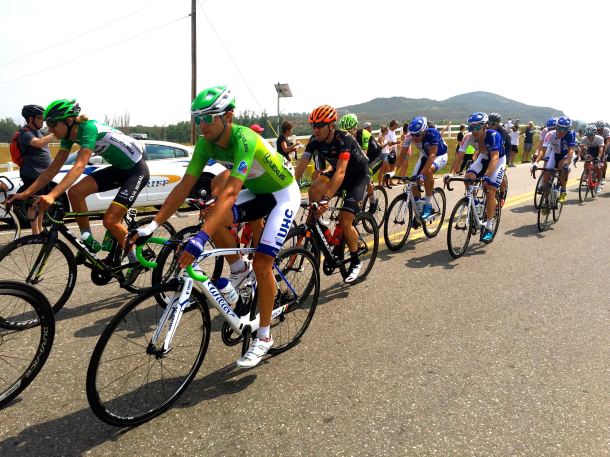 I resigned myself to being dropped by the group on the climbs.  That happened a lot over the rest of the rides.

We had a hydration and feed stop at Eagle Campground – hello Fig Newtons – before descending along the east side of the reservoir. 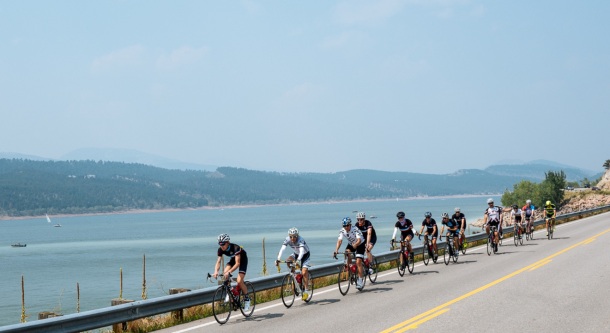 Our route included a section of dirt road with some loose gravel to get the adrenaline pumping.

I spent a lot of time chasing back to the group after struggling up some incline or other.  Thank goodness for Cognoscenti guide Tristan Brown on his Boo Bicycle, and Craig Lewis, who kept me company.

It was a relatively long day in the saddle.  I think we were all grateful for the watermelon and cold towels at the St. Julien.

There was time for a shower and laundry drop off before we regrouped for pre-dinner drinks.  Dinner was at The Kitchen Upstairs.  True to its name, the restaurant is at the top of a flight of stairs.  My legs were not happy as I hauled myself up to our table.

It was worth the climb.  The surroundings were lovely, the company was excellent, the service was good and the food was fabulous.  Marinated olives,spiced nuts, roast beetroot salad, radish salad, pizza, salmon, goat gouda gougères, polenta, summer succotash, summer risotto, chocolate cake and Eton mess.

The first full Cognoscenti day was done.  Day 3 promised to be another great day.