I was in front of the George R. Brown Convention Centre in Houston.  Along with about 13,000 other cyclists, many dressed in Halloween costumes and astride bicycles festooned with all manner of coloured lights.  After a couple of months of regular outings with the Six Thirty group I had felt confident enough to sign up for my first organised ride:  The Moonlight Bicycle Ramble.  Confident enough to choose the 20 mile route over the 8 mile option.

I lived 1.6 km from the convention centre.  All I needed was 15 minutes to get to the start line.  At 1:30 a.m. I checked the weather forecast.  It was a chilly 8° C / 47° F.  As the the heat of summer cooled to the crispness of autumn I had added some long-sleeved jerseys to my cycling wardrobe.  Including an orange one which suited the occasion in the absence of a Halloween costume.  A t-shirt under that jersey would keep my upper body relatively comfortable.  I had a hat and gloves to keep my ears and hands warm.  I was still riding in baggy shorts but I wasn’t worried about my knees and calves getting cold.  That left my feet, which are still the first part of my body to get cold when the mercury drops.  My Mizuno Wave Riders had proven that they were not the warmest of shoes. 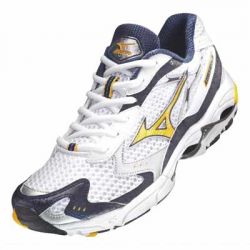 I had already ended a few evening rides with numb feet.  My shoes had open-weave uppers that let in the cold air almost unimpeded.  I didn’t fancy the prospect of cycling 20 miles that night in those shoes.  The temperatures were sure to drop below the already nippy 8° C.  So I resorted to a trick that I had heard some riders talking about during the evening ride the week before. 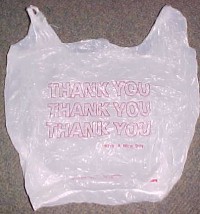 I rolled away from the start line with plastic bags taped around my Mizunos.  In the company of wizards, witches, gorillas, bananas, hot dogs and other assorted characters.  I didn’t cut the most stylish figure that night.  But my feet didn’t freeze, even during that last cold stretch along Buffalo Bayou. 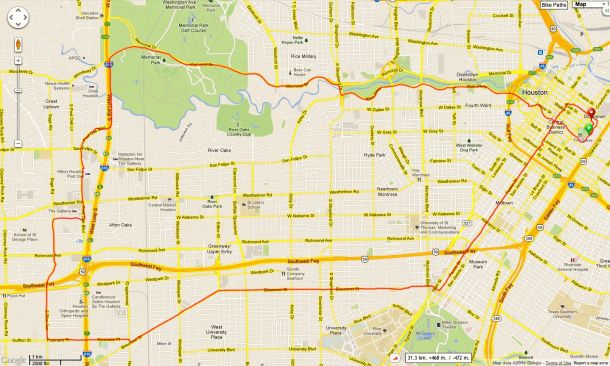