The R@SKLs in Taiwan: Day 2

The Kenting Youth Activity Centre is on a beach.  Those who were up early enough took a stroll to the rocky shore, taking care to avoid the vicious thorns on the plants lining the trail.

Xiao Ger and Ah Dar arrived with our bikes at 7.30am as promised.  We had planned to be on our way at 8.00am.  Last minute adjustments and photographing meant that we got away at 8.30am. 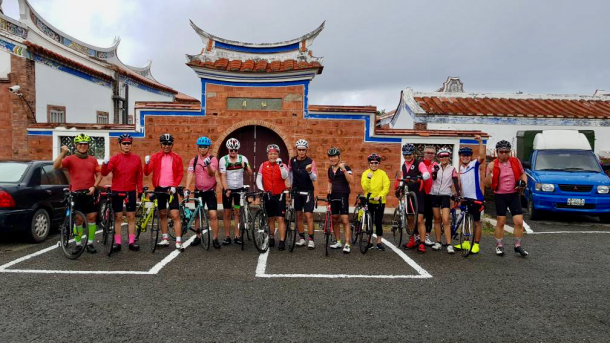 Some of us had rain vests and jackets on because the weather forecast for southern Taiwan was accurate.  It was Wednesday, and it was raining.

Our route for the day took us close to the southernmost point of Taiwan Island before heading up the east coast to Taitung.

We tried to get to Eluanbi Lighthouse, but it is only accessible on foot.

There were another 490 metres of climbing in the next 28km.  The view from the top of the climb made the effort worthwhile. Certainly worth posing for a group photograph there.

Stopping for photographs became a regular occurrence.  The views were spectacular. We stopped so often, including here to regroup and dry off after yet more rain, that it took us just under 3hrs 15min to cover the first 50km. 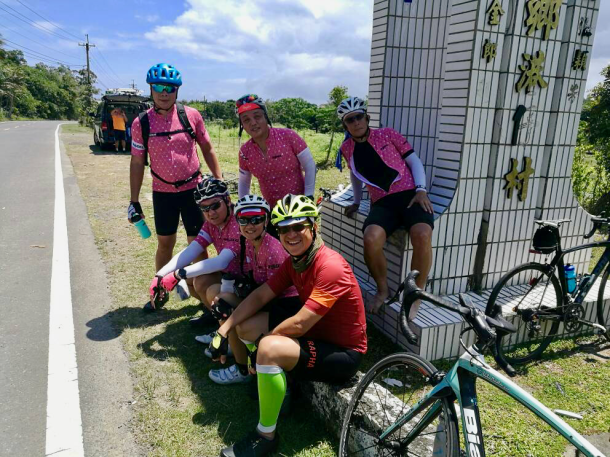 At the 50km point, we were riding along the beach again.  The roads were very very nice.  Smooth, clean, and very quiet.

Those blue waters were irresistible.

So irresistible that even the gods look out over the sea at Manzhou township.

We stopped for a break at the Pingtung County Police Bureau.  We were 56km into the ride, and the climb of the day was just ahead.  700 metres of elevation over 21km. 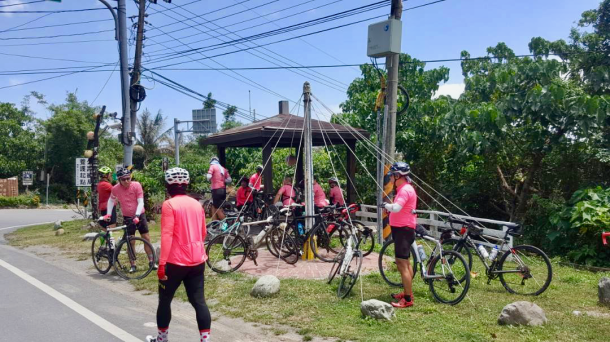 Many of the police stations in Taiwan are equipped to assist cyclists.  We could refill water bottles at the Pingtung police station.  There was also a pump and a basic toolkit available for roadside repairs.

I didn’t see a crayfish restaurant though. 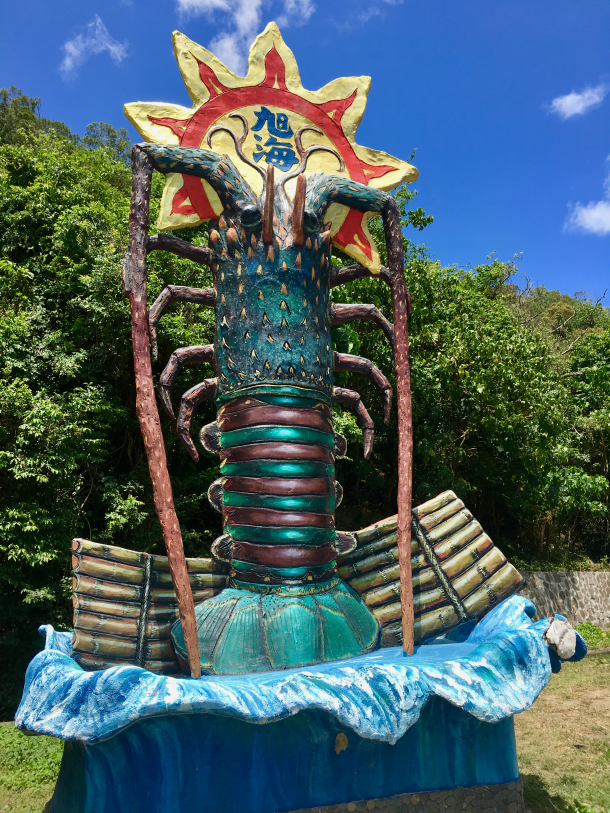 After we raided the support vans for bananas, candy bars, and cakes, we hit the climb.  That big lump in the profile below.

Xiao Ger had headed off to buy packed lunches for us while we were at Pingtung.  He was waiting for us when we got to the three-way junction about halfway up the climb.  Where, most conveniently, there was a roadside restaurant where the owner was happy to let us sit at tables to eat our packed lunches.

Of course, we bought lots of cold drinks there.  Including my favourite, a Taiwanese grapefruit flavoured sports drink called Super Supao.

The biggest incident of the entire trip happened at that lunch.  TH cracked a tooth on a chicken bone hidden inside a dumpling.

Having two support vehicles suddenly became a godsend.  Ah Dar ferried TH, and a few others who had called it a day, to Taitung.  Xiao Ger followed while Voon Kiat and the rest of us tackled the second half of the climb.

Voon Kiat might have preferred to do the climb on the back of this beast, rather than on his bike.

We were moving away from the coast but were high enough that the sea was visible in the distance.

The Shouka Bike Station is at the top of the climb.

From the Shouka Bike Station it is 11km at an average speed of 40kph to the 7-Eleven store at Anshuo.  7-Elevens were our go-to places for snacks and drinks.  There are more than 5,200 7-Eleven stores in Taiwan.  So one was never very far away.  They have an amazing range of products on offer, and most provide in-store seating.  If we had needed it, 7-Elevens in Taiwan also provide internet access, photocopying, printing, bill payment, and shipping and pick up services.  You name it, and 7-Eleven probably has the solution.  They operate 24/7 to boot.

We were a few kilometres from the Anshuo 7-Eleven when we realised that we had left Kiam Woon behind at the store.  We stopped at this temple to wait for him.

Kiam Woon had decided to ride with Arthur at a slower pace, so we headed off again.

We didn’t know it at the time, but the really hard work was ahead of us.  We were a couple of kilometres from the coast.  Which we expected to be very nice.  Much like the riding along the coast that we had done earlier in the day.   However, we were now on Provincial Highway 9.  An important highway along the eastern seaboard.  The traffic was suddenly an order of magnitude heavier than it had been for the first 90km of the ride.  Worst of all, there was a strong headwind.

Those 47km on Provincial Highway 9 were a challenge.  That section included 630 metres of elevation and a number of lane closures due to roadworks.  All ridden into a block headwind with the occasional bus passing, at speed, right next to us.

We took a break from battling the wind at 110km. 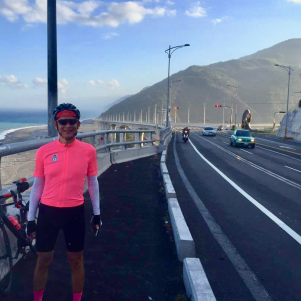 We needed another rest 15km later.  One of my cleats had come loose, which provided a convenient excuse to stop.

13km later we finally headed away from the sea, and the headwind eased.  It didn’t stop completely until about 10km from the Traveller Inn in Taitung.  Voon Kiat and I had pulled ahead of the others and were following the route which I had downloaded onto my Garmin.  We would have been better off sticking with Pai and the others.

Pai realised that there was a shorter route to the hotel that the way our Garmins were taking us.  Only 5km shorter, but after 150km and 2,300 metres of elevation, every kilometre less would have helped.

What did help was the fact that Voon Kiat had two front lights.  I hadn’t packed a front light.  By 6.15pm it was dark, and we still had 10km to go.

Voon Kiat and I needed one last 7-Eleven stop with about 6km to go.  If I hadn’t had an almond Snickers bar and a bottle of Super Supao, I would have had to call Xiao Ger or Ah Dar to come and rescue me from the edge of the road.

It was a tough day, but we all made it to the hotel 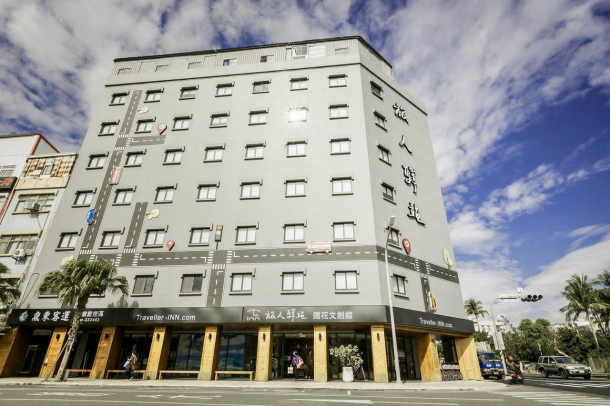 Our day wasn’t as tough as TH’s day.

Everyone felt better after a shower and a change of clothes.  Dinner was at a restaurant across the road from the hotel.

It was Pai’s birthday.

Some of the R@SKLs had the energy to hit a night market after dinner.

I hit my pillow.