Team 165 drove to Johor, the southernmost state in peninsular Malaysia, for the Iskandar Johor Mega Ride.  A 120 km / 75 mi loop that started and ended at Kota Iskandar, the new administrative center for the state government of Johor.

I had never been to Kota Iskandar, which is part of the larger Nusajaya development.  The arch at the entrance to the complex gives visitors some hint of what is to come. 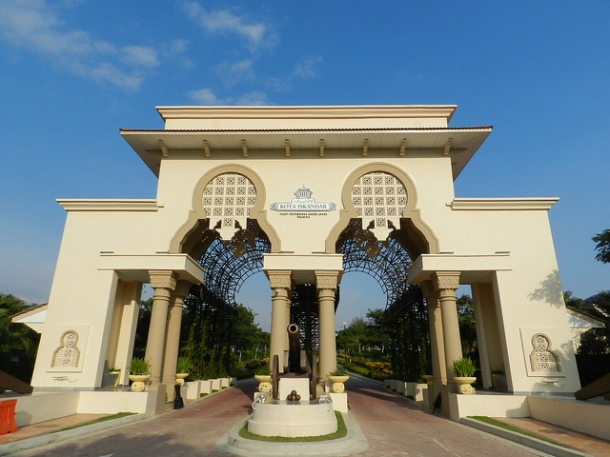 This is the Dato’ Jaafar Muhammad building.  Named after the first Chief Minister of Johor, this building houses the Office of the Chief Minister and State Secretariat. 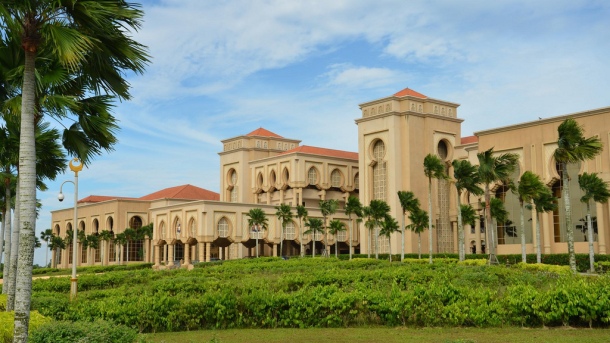 The Sultan Ismail building is the home of the State Parliament. 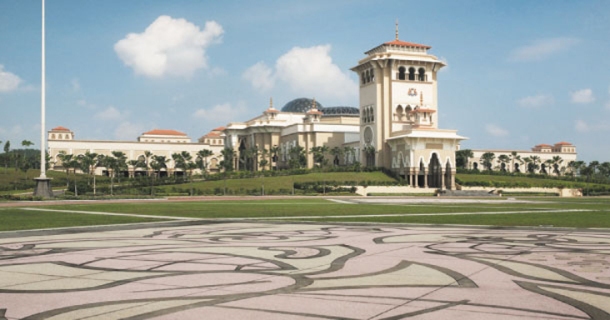 The ride started at 7.45am, a little behind schedule.  This is the young and fast group at the line, eager to get going.

Keat, Hans and I took our customary positions towards the back of the peloton.  As it turned out the first 30 km / 19 mi or so were at a controlled speed behind a group of police motorbikes.  The route started through the relative quiet of Nusajaya.  We rode past Malaysia’s first international theme park.  Legoland Malaysia opened less than a year ago.

Then it was along the Lebuhraya Pesisir Pantai (Coast Highway) and through the west edge of Johor Bahru, the capital city of Johor.  Johor Bahru is the third-largest city in Malaysia, and it has the morning rush hour traffic to prove it.

The motorbike police stopped traffic from entering the highway as we rode past.  Despite having the police marshals we had to do some defensive riding, especially along Jalan Skudai, where the traffic was particularly heavy.

Once we got through Skudai there was a lot less traffic on the road with us.  Unbeknownst to us there were fewer cyclists as well.  A group of about thirty riders, including Keat, fell behind the marshals and got lost.  They ended up being directed back to the start and having their ride cut short.

The rest of us were pleasantly surprised to come upon a water stop after 40 km / 25 mi.  The route map showed the first water stop at 65 km / 40 mi.  Even better was the fact that the water being handed out was chilled.

I put my revised hyperthermia control strategy into action.  I poured a couple of bottles of cold water over my head, soaking my hair, jersey and arm coolers.  I did the same at the next water stop at the 80 km / 50 mi point.  That worked so well at keeping my core body temperature down that I didn’t bother to stop at petrol stations to buy ice cream.

It helped that there wasn’t much climbing on this ride.  There was a lump to get over between 30 km / 19 mi and 46 km / 29 mi but the gradients were gentle.  The steepest bits were on the bridges and overpasses along the Pesisir Pantai Highway.

When Hans and I got back to the Lebuhraya Pesisir Pantai for the second time we realised that the route had been changed.  About 20 km / 12 mi had been taken out of the early stages of the route.  That explained why we got to the first water stop so quickly.  We hit the finish line after just under 100 km / 62 mi of riding.

Hans and I rode the course at a reasonably fast pace (for us oldies anyway).  We averaged 30.8 kph / 19.2 mph for the ride.  So we didn’t complain that the route had been shortened.  Our relief was short-lived though. 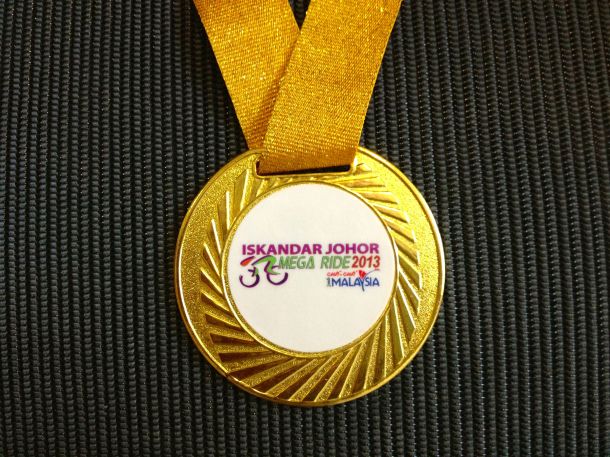 After we were given our medals I saw the message on my mobile phone from Keat saying that he got lost and had to truncate his ride.  Just after I sent him a reply asking him where he was, my mobile phone battery died.

Keat wasn’t at the finish area.  Hans and I rode to where we had parked.  No sign of Keat or his truck.  So we kept riding toward our hotel.

15 km / 9 mi of the route back to our hotel in Bukit Indah was along the 2nd Link Malaysia – Singapore Highway.  Where bicycles are not allowed.  Of course a pair of highway patrolmen pulled up behind us on that section.  Fortunately they bought my woeful tale of being abandoned in Kota Iskandar, and let us ride the last 5 km / 3 mi along the highway to our exit.  Hans and I covered 120 km / 75 mi and a bit more on the day after all.

Keat had driven back to the finish area to look for us.  He caught up with us on the road just after our encounter with the highway patrol, and escorted us back to the hotel. 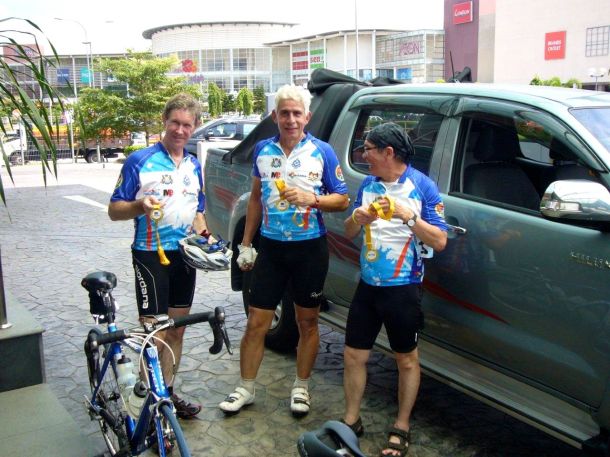 More Team 165 adventures to come in August and September.

Hyperthermia is elevated body temperature due to failed thermoregulation that occurs when a body produces or absorbs more heat than it dissipates.  From the Wikipedia entry for hyerthermia

I had a few instances of overheating when I first got back to Malaysia.  The land where maximum temperatures year-round look like this:

Since then I have been able to manage my core temperature.  I have been hot during rides, but not excessively so.  Where did I go wrong during the Kuantan Century Ride to end up hyperthermic?

A lot has to do with the length of this ride.  It was about 100 km / 62 mi longer than our weekend rides.  My routine for staying cool during those rides was insufficient when stretched out over 160 km / 100 mi.

There are reams of articles, blog posts and lists about how to prevent exercise-induced heat stress.  They all start with hydration.  The most important thing you can do to stave off hyperthermia is to stay hydrated.  How much fluid is required depends on body type and sweat rate.  One guideline suggests drinking 1 liter / 34 oz per hour.  By this measure I should have drunk about 6 liters / 203 oz during the ride.  I did drink about 5 liters / 170 oz.  My Camelbak Podium Chill bottles hold 620 ml / 21 oz each.  I went through 8 bottles.  So I was 2 bottles short.

What you drink is also crucial.  Lost fluids and electrolytes need to be replaced during a ride.  I added a Nuun tablet every time I refilled a bottle with water.  Even so I probably didn’t take in as many electrolytes as I should have because I didn’t drink enough.

I usually put a bottle in the freezer and another in the fridge the night before a weekend ride.  The cold fluid helps to keep my core temperature in check.  All the fluid I drank during the Kuantan Century Ride was lukewarm.  It wasn’t until I picked up some ice at the last rest stop that I got some cooling effect from what I was drinking.

I got my hydration wrong on all counts.

Clothing always gets a prominent mention.  I had on the right ‘technical fabrics’ that wick sweat away from the body.  As the sweat evaporates it carries heat away with it.

The right fabrics but perhaps the wrong color.  My jersey was navy blue, and the suggestion for staying cool is to wear a light-color.  The sun was very strong so it is likely that I absorbed more radiant energy that I would have if I had worn a white jersey.

My jersey did have a full zip.  Unzipping my jersey and getting moving air onto my bare skin helped a lot.

I also had my arms covered so they never felt hot.  My bare legs, on the other hand, did get hot.

I got my clothing partially right.

Most writers suggest pouring water over your head every 15 minutes or so.  Preferably enough to soak your jersey as well as wet your head, face and neck.  You will immediately feel that the water is cooler than your body is.  Pouring a bottle of water over my head did cross my mind, but the two times I thought about it I was at rest stops that had run out of water.

Another suggestion is to generate less body heat by riding at a slower pace.  My riding companions and I had planned to ride at an easy pace right from the start.  The intent was to conserve energy so that we would still have something in the tank for the last part of the ride.  I am sure the gentler pace helped keep my core temperature down, at least in the first half of the ride.  Of course riding at a slower speed meant spending more time in the sun than would have been the case if we had gone quicker.  I am not sure which would have been more detrimental:  generating more body heat or absorbing more radiant heat.

Let’s say that I got the pace of the ride right.

That, and having ice to eat for the final 30 km / 18 mi, is probably how I made it to the end of the ride.  I knew I was feeling the effects of hyperthermia with 50 km / 31 mi to go.  I was light-headed, which I now know is an early symptom of heat syncope.  I started cramping on the run in to the finish.  That is another symptom of hyperthermia.

After the ride I spent 30 minutes sprawled in the shade, shoes off and iced drink in hand.  That cool tiled floor felt good.

So what to during the 120 km / 74.5 mi Iskandar Johor Mega Ride in July?  The lessons learned from the Kuantan Century Ride are:

All the “Beat the Heat” articles I read today have given me a few other things to try as well:

I’ll give these other suggestions a miss for now: