RSS Feed
← Diagnosing That 🔥💀💣⚡ Tick Creak
Does a Base Layer Really Work in Tropical Weather? →

When I first read the terms “Audax,””Brevet” and “Randonneurs,” I had to look up what they meant.

Apart from noting that audax is an excuse to market hi-viz jerseys for brevets (see the zipped chest pocket for carrying a brevet card), I thought little more about that variety of cycling. 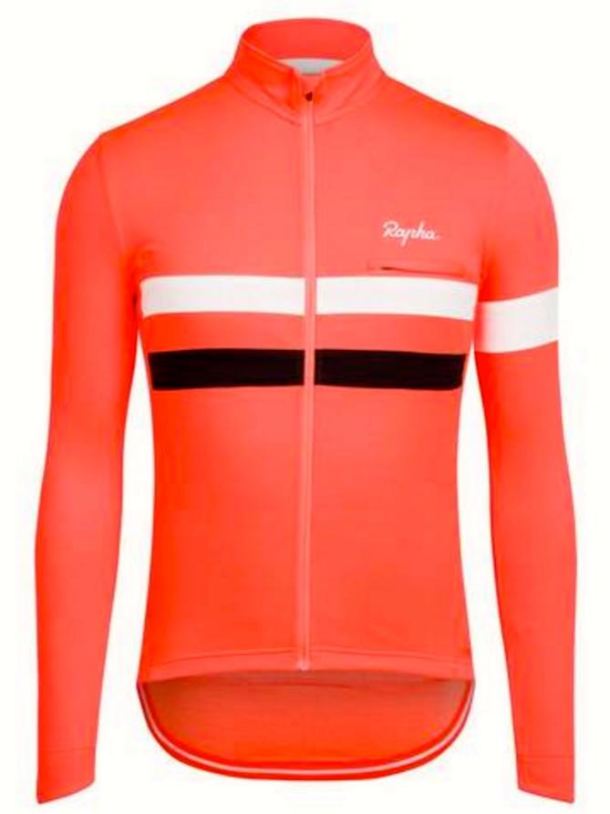 Some time later I read an online article in CyclingTips titled “Paris-Brest-Paris – Never Again.”  Written by James Fairbank, a finisher of the 2011 edition of the quadrennial 1,200km brevet from Paris, to Brest, and back again in a time limit of under 90 hours.

Then I read the accounts of four other riders who also completed the 2011 Paris-Brest-Paris in “PBP 2011: Four Journeys” on the Rapha website (the provider of the Brevet jersey above).

So when I was invited to participate in the first Official Audax Brevet in Malaysia (thanks Yue-Jin), I thought “No way!”  220km / 137mi was further than I had ever ridden in one sitting, so to speak.

But the more my cycling buddies and I talked about it, the more we thought “Why not?”

Which led to ten of my buddies and I being amongst the 480 or so mad folk who registered for this event.  Here we are in Kapar, ready for the 5am start. 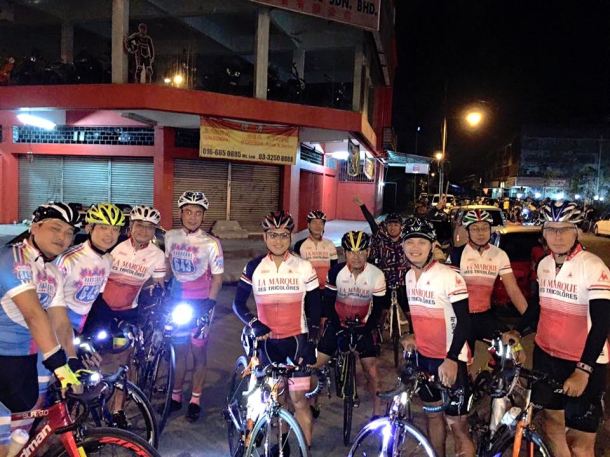 We collected our brevet cards and then rode off into the darkness.

Fortunately we didn’t have to make any turns during the first two hours.  In the dark I couldn’t read the nifty cue card that Liang had made for us.  Brevet routes are not marked, so this cue card taped to my top tube was consulted often after we got past the first check-point.

By sunrise we had reached Sekinchan on our run northwest up the coast.

Just before 8am we rolled into the first check-point at the McDonalds in Sungai Besar.

We needed breakfast, but an Egg McMuffin didn’t appeal.  So some of us went on a hunt for roti canai.  Which we found at what is apparently Sungai Besar’s oldest Malay restaurant.  I think the wait staff were a bit surprised to have a dozen lycra-clad guys turn up together.  All demanding food.

Six more of these please! 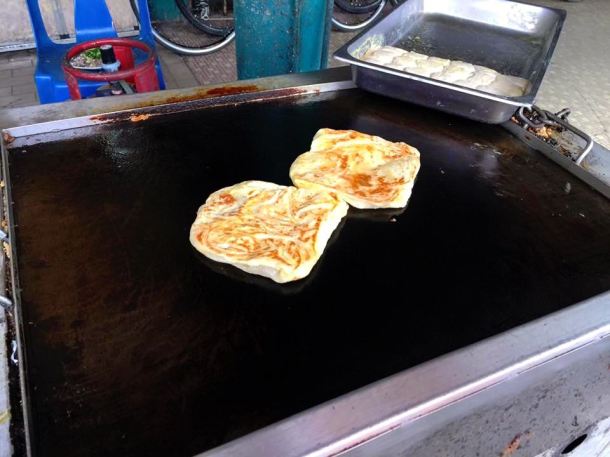 By the time we got going again the sun was breaking through the clouds.  The weather forecast had called for continuous rain, and I had come prepared with a rain jacket and shoe covers.  We were all looking forward to the cooler temperatures that rain brings.

However the only water we saw all day was in this canal.  No need for that rain gear.

The sun got brighter and brighter as the day progressed.  There was some cloud cover, so we had occasional respite from direct sunshine, but we felt the heat anyway. 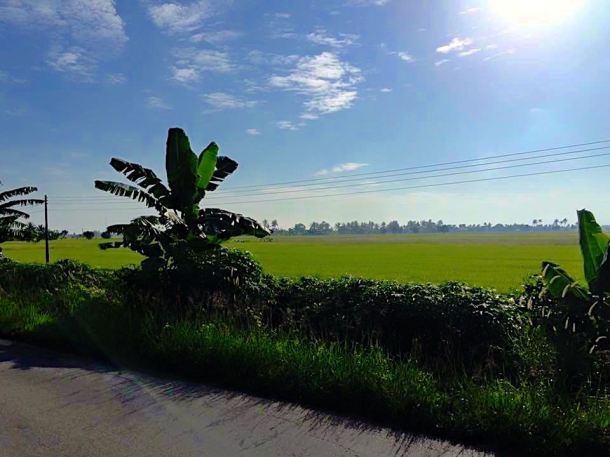 At about 9.30am we turned onto Jalan Sungai Panjang.  Why did the squirrel cross the road?

Jalan Sungai Panjang, or Long River road, is appropriately named.  We were on it for 40km / 25mi.

That is not the river on the left by the way.  Sungai Bernam is a couple of kilometers to the left of this road.  That river demarcates the border between the states of Selangor and Perak, starting from the river mouth on the west coast and meandering 90km / 56mi or so eastward to Tanjung Malim.

Before long some of the group got bored and upped the pace.  The rest of us followed for about 10km / 6mi before letting the faster riders go.  We needed a break.  Mark spotted a stall in the midst of the oil palm trees.  Literally in the middle of nowhere.  Just what the doctor ordered.

We cruised the remaining 17km / 10.5mi to the second check-point at Kampung Soeharto, posing for some GoPro shots along the way. 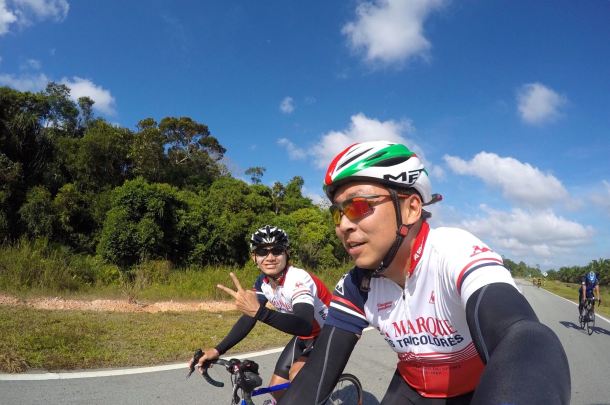 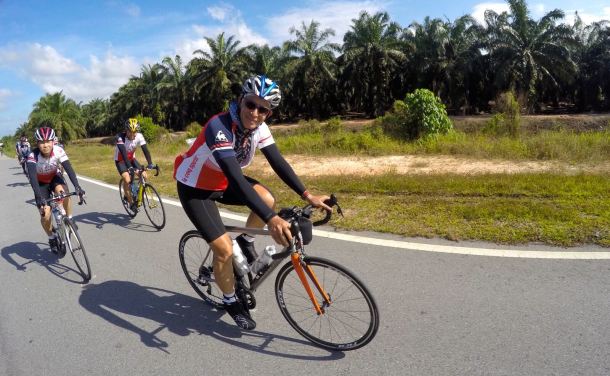 And enjoyed the shade beneath the clouds where we could. 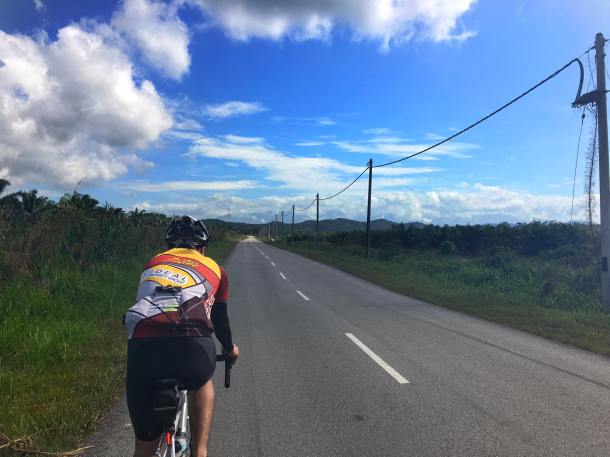 The first order of business upon arriving in Kampung Soeharto at 11.30am was to get our brevet cards stamped by a group of cheerful volunteers.

Then it was time for lunch.  The brevet organisers had warned us that there was no food or drink to be had for 40km / 25mi beyond Kampung Soeharto.  We crowded into Laila Restaurant for chicken rice and lime juice. 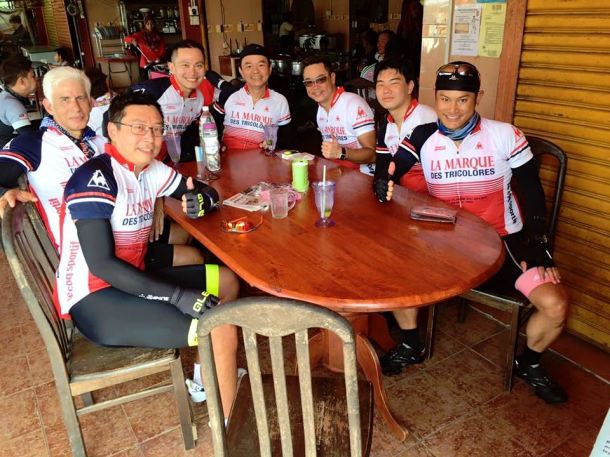 Shade was in demand!

We spent about an hour in Kampung Soeharto.  It was almost 2pm by the time we got to the outskirts of Batang Berjuntai.  The first sign of refreshment after the previous bone dry 40km / 25mi was a roadside stall selling coconut water.

Take one freshly-opened young coconut, add ice and a straw, and say “aaaaaah!” 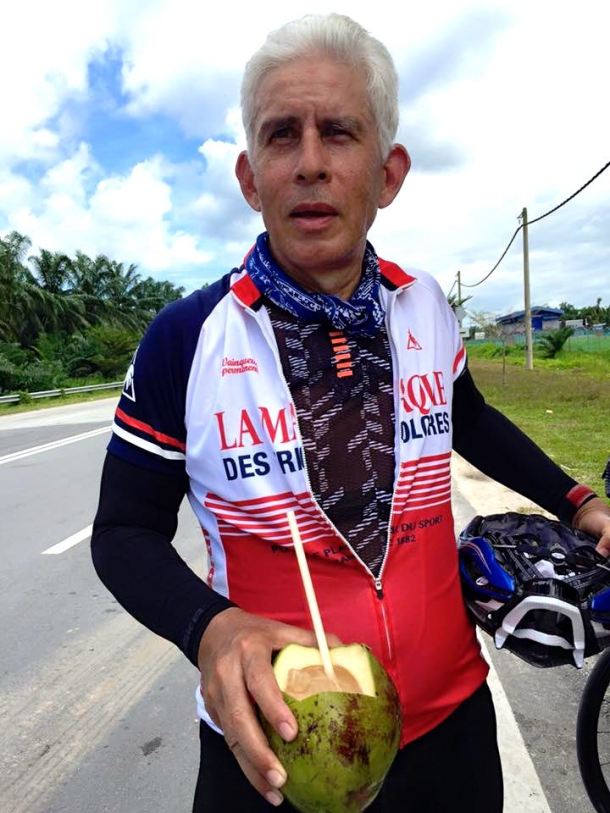 We made one more stop at the PETRONAS station at Simpang Tiga Ijok.  That was only 10km / 6mi from the coconut water stall, but it didn’t take long in the 35° C / 95° F heat for us to want more cold drinks and some time in air-conditioning.

At that point most, if not all, of my buddies had ridden further than they had on their previous longest rides.  I was in new territory also.  Despite having ridden 190km / 118mi we were all still in good shape.  Tired and a bit sore perhaps, but no one was cramping.

Our decision to ride conservatively (there was one collective rush of blood to the head before our Coca Cola stop, but that turn of speed didn’t last very long) had paid off.  I was certainly feeling better at 190km on this day than I remember feeling at 100km / 62mi on a number of previous rides.

We also had the good fortune of not suffering any mechanical problems.  Not a puncture amongst us.  Respect to this gentleman, who finished the ride solo on a tandem that had suffered a broken rear wheel spoke.  Thereby embodying the self-reliance that the Audax culture prizes.  External support is expressly prohibited in the Audax rules, and if you go off course or experience a mechanical, you are expected to take responsibility for finding your own way home and making your own repairs on the road.

The organisers had been forced to make a last-minute change to the end of the route, to avoid presumably worse conditions.  The roads on the rest of the route were by and large in good to very good condition.

Audax Randonneurs Malaysia did a terrific job putting this event together.  Kudos to the committee members.  And a heartfelt shout-out to the volunteers who distributed and stamped the brevet cards.

All the information that went out ahead of the event was very helpful. In particular the cue sheet and photographs of the turns along the route, like this one.

All my buddies and I finished the ride in about 10 hours 45 minutes.  Well within the time limit of 13 hours 30 minutes.

As did this group, which rolled into the final check-point at the Kapar KFC about 8 hours after they started. 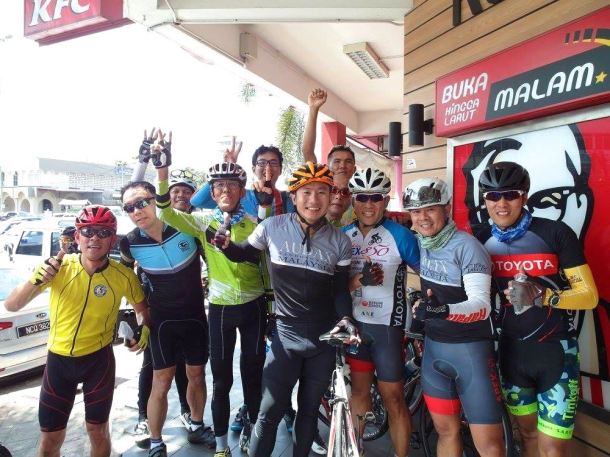 In the spirit of Audax, all 389 of us who finished the event before 6.30pm, including getting to the check-points on time, were successful.  One last stamp on the brevet card.

We are all very pleased with our achievement. 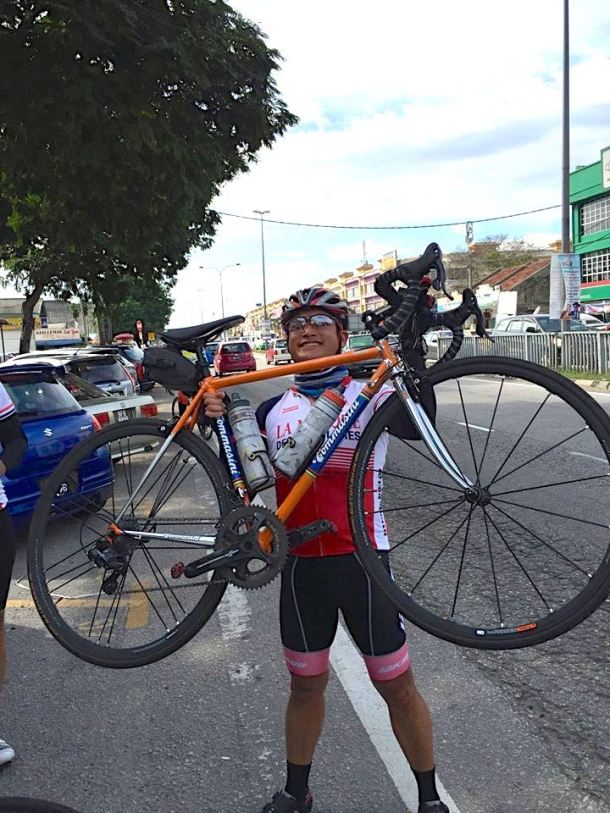 I think all my riding buddies joined me in stumping up the cash to get a 200km medal from the Audax Club Parisien, the body that administers randonneuring around the world.  This will be quite a memento.

The question now is, will my buddies and I ride it?

I left Malaysia in 2008 as a non-cyclist. I am back home now with three road bikes and all the paraphernalia that goes with being addicted to cycling.
View all posts by alchemyrider »
← Diagnosing That 🔥💀💣⚡ Tick Creak
Does a Base Layer Really Work in Tropical Weather? →