RSS Feed
← A Bicycle for the Cognoscenti Adventure
Cognoscenti Day 2 →

Day 1 of my Cognoscenti adventure started with Karl Maier, one of the founders of Cognoscenti, picking me up from the Airbnb house where I was staying in Denver, and transporting my bike and I to the St. Julien Hotel in Boulder.  My home for the next six days.

Andrew Knowles, the other founder of Cognoscenti, met us in the lobby of the hotel, where I was given my rain bag, stuffed with goodies.  Bottles, Townie Syndicate tire levers and tools, Skratch Labs hydration and nutrition products, chamois cream, sun block, moisturizer, waterproof pouch, cap, and some bedtime reading.  Note the name tag.  A nice touch. 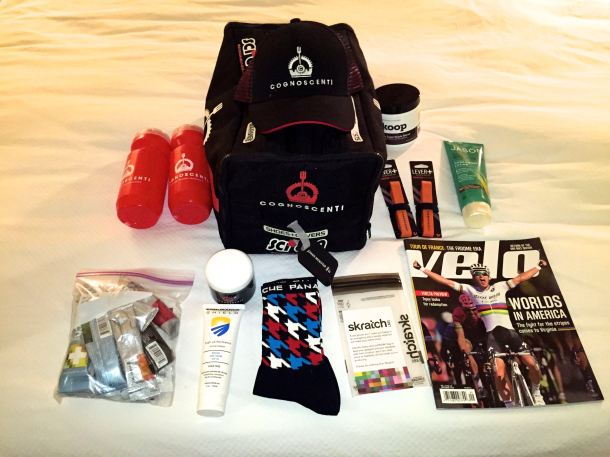 Cognoscenti provided everything I needed to ride, apart from a bicycle, shoes and helmet.  We all received a pair of Panache Cyclewear bibshorts and a jersey.  Cognoscenti styled. 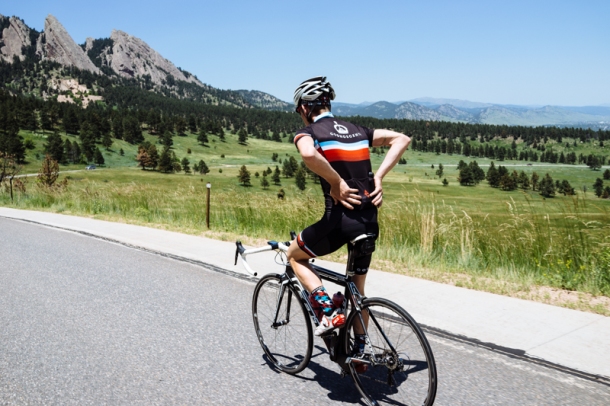 I had a few minutes to check in to my room and change into riding gear before heading out to the back patio of the hotel to meet the other participants and the Cognoscenti support crew. 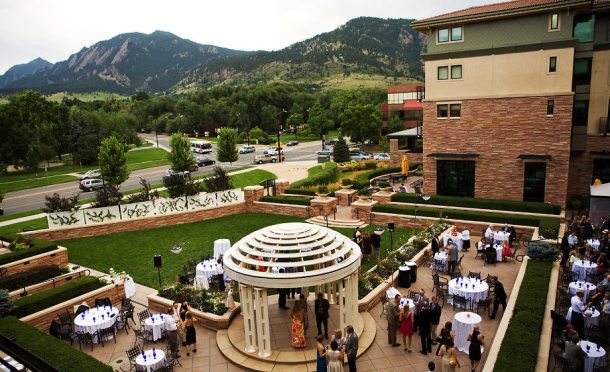 We took over the grassy area along the back wall nearest the road.  That is where I was reunited with my bike, now sporting a name label on the top tube. 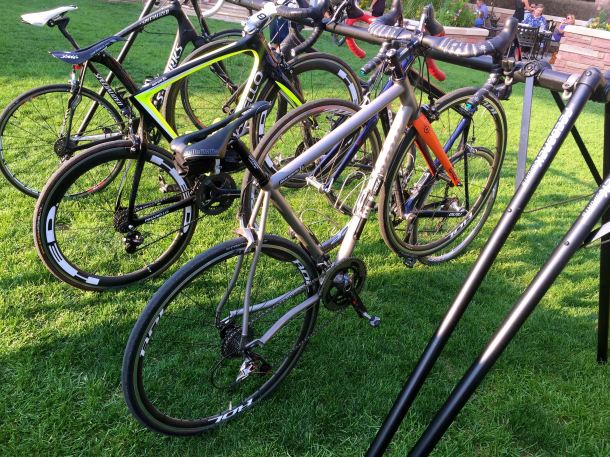 Our professional guest cyclist for the day was Sarah Lukas, who rides for the Amy D. Foundation team.  Having one or more current or ex-professional riders with us on every ride was both a highlight and a challenge.  A highlight because to a person they were always willing to chat, and to provide a pull.  A challenge because they made real the gulf in cycling ability between we mortals and the professional peloton.

We were also joined each day by at least one editor from VeloNews.  Names familiar to me from the VeloNews website appeared before me in the flesh:  Chris Case (Managing Editor), Spencer Powlison (VeloNews.com Editor), Brad Kaminski ( Photography Editor), Dan Cavallari (Technology Editor), and Neal Rodgers (Editor at Large).

While the cast of professional riders and VeloNews editors changed daily, the Cognoscenti guides were a constant.  The full support we received all week was thanks to Jon Robichaud, Russ Folger, Tristan Brown and Patrick Walker.  These guys meant it when they said they would provide full support.  Our bikes were washed and tuned after each ride.  When we took our bikes off the rack to start a ride, bottles full of Skratch Labs hydration were already in the cages.  A support van and at least one other vehicle were always nearby.  Fresh chilled bottles were always available.  As was an endless supply of those now famous Skratch Labs rice cakes and cookie bars.

Fully prepped, we headed out on what was described as an “acclimatization spin.”  A 57.5km / 36mi ride along the flats of Boulder County to St. Vrain Road and back.  There was about 475m / 1,560ft of climbing.  Which was a lot for me, but as I was to discover, was just a hint of what was to come. 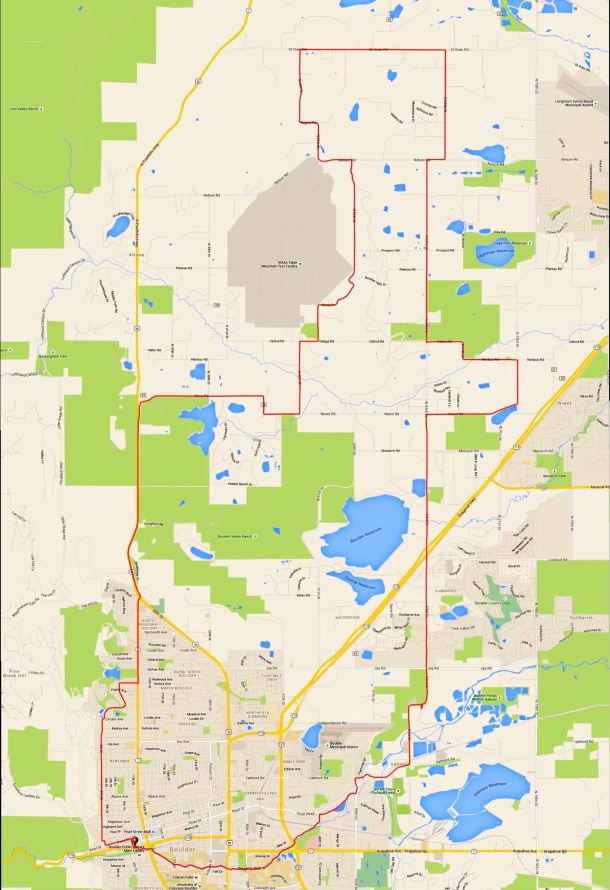 The ride was relatively fast for me.  Which signalled trouble, because I could already see that my new friends were all stronger riders than I was.  I was struggling with the lower air pressure and oxygen levels.  Boulder is 1,655m / 5,430ft above sea level.  Which translates to 17% less oxygen by volume than is available at sea level.

Despite my panting in the hot and dry air, I did enjoy the ride.  Especially the gravel sections.  Riding unpaved roads like those was new to me.  It took a while to get comfortable riding on the loose surface.  Oddly enough I felt more comfortable on the rutted sections, which felt like the cobbles of South Holland and Belgium. 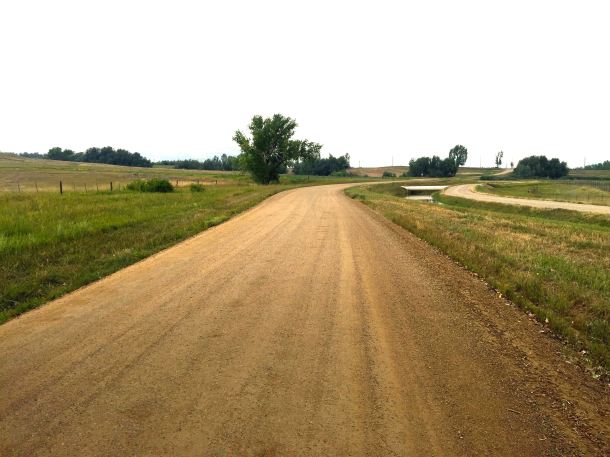 The last 6km / 3.5mi were along the Boulder Creek bike path.  Where I was at last able to catch my breath. 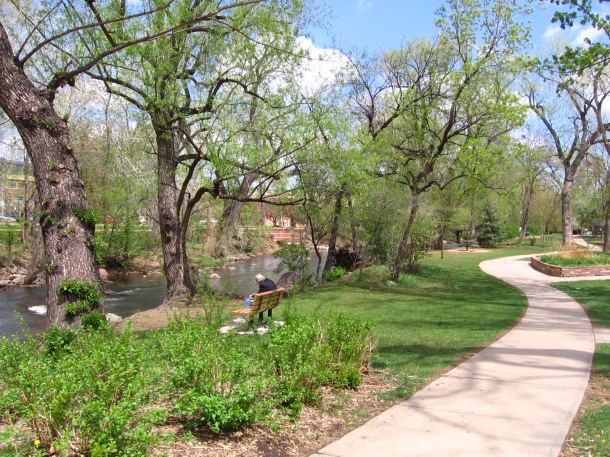 We were greeted back at the St. Julien by slices of iced and salted watermelon, and iced towels to drape over the backs of our necks.  Our bikes were taken from us to be washed.  We were given mesh bags for our used kit, which would be laundered overnight.  See what I mean about first-class support?

We had an hour or so to shower and freshen up before meeting in the St. Julien lobby for a drink with our pro rider and VeloNews guests.  Then we walked the short distance to PMG for dinner.

Cognoscenti believes that Boulder is one of the best intersections of cycling and food and wine in the world.  We had just had some fabulous cycling, and PMG did not disappoint on the food front.  Shared plates of fried eggplant, crostini with English peas and ricotta, Tuscan kale salad, Burrata with heirloom tomatoes and bagna cauda, tortellini with butter and sage, swordfish, and roast chicken came one after the other out of the kitchen.  Luckily I still had room for the chocolate pot de crème and fresh peaches for dessert. 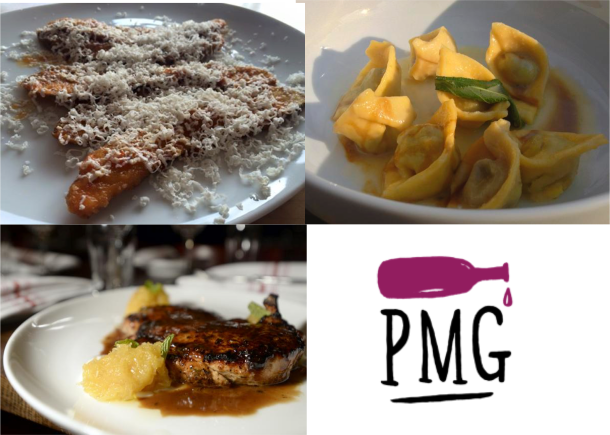 I left Malaysia in 2008 as a non-cyclist. I am back home now with three road bikes and all the paraphernalia that goes with being addicted to cycling.
View all posts by alchemyrider »
← A Bicycle for the Cognoscenti Adventure
Cognoscenti Day 2 →