When I found out that I was moving back to Kuala Lumpur, Farid was one of the first people I contacted about riding.  He and I were colleagues at Hess Corporation.  At the time he rode motorbikes.  I assume he still has his motorbike.  These days he also hits the roads on his red and white Colnago Ace.

This morning was the first opportunity we had to ride together.  Farid rides with the Cyclistis.  A group afflicted with the love of cycling.  Early starts are essential if you want to avoid the midday heat.  I was in the car at 6.45am for the twenty eight kilometers to the meeting point.  Adzuan, Asyraf, Farid, Syihan and I met around the corner from the police station at Pekan Batu 18, a village at the 18th mile on the Hulu Langat road.

Kuala Lumpur sits in a basin and is surrounded by hills.  My compact crankset will get a lot of use here.  Our route took us steadily upward from the start.  We turned onto Jalan Sungai Lui and rode through rolling countryside for the first 10 kms.  The approach to Kampung Gemi marked the first true climb of the day.  60 meters / 200 ft in 1.4 km.

The payoff was the 2.5 km descent to Tasik Semenyih.  This is a man-made lake.   It is one of the reservoirs that provides fresh water to Kuala Lumpur and other towns and cities in the Klang Valley.  The dam holding back the lake is visible in the distance. 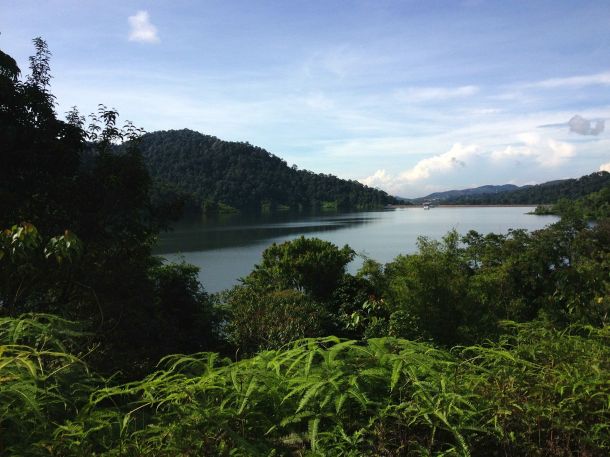 We rode through more rolling terrain along the western shore of the lake.  In the Netherlands you have to be alert for ducks, geese and rabbits crossing the bike paths.  Here we have to watch out for a different animal.

In the Netherlands all the water is horizontal; in canals and lakes.  The heavy rain we have had here over the past couple of weeks is feeding lots of these alongside the roads.

At the far end of the lake we hit a 500 meter stretch that dropped at better than 6.5°.  No problem with ‘riding’ my age there.  The problem came just a few minutes later when we turned around to retrace our route.  Going up that 500 meter stretch wasn’t as much fun.

I took a short detour at the 30 km point.  They guys had told me about a steep climb up Jalan Sungai Tekali.  I thought I would take a look at it.  It certainly was steep with a grade of better than 9°.  A taste was all I wanted so I stopped after 500 meters and waited for a car to go past before turning around.  I forgot that I was in a very small gear.  As I turned my bike I pushed down hard on my pedal and my front wheel lifted off the ground.  In a dejà vu moment, considering the topic of my last post, I tumbled to the ground.  In typical roadie fashion I first checked to see if my bike was okay.  It was.  I on the other hand had a bloodied elbow and a bruised hip.

I have learned a few tricks since I started riding here.  One is to add a towel and a bottle of water to my riding kit bag.  Essential for wiping oneself down after a hot and sweaty ride if you want to be presentable post-ride.  Here are my very presentable fellow Cyclistis; Asyraf, Adzuan, Hairi (who started late on his mountain bike and caught up with us at the end of the ride) , Syihan and Farid, after the mandatory teh tarik and roti canai.

* Title courtesy of The Sound of Music.

A Rite of Passage

I was eager to take my new road bike out onto the streets of Houston for an inaugural ride.  However there was something I had to learn to do before I went out on the road.  My hybrid bike had a pair of these . . . 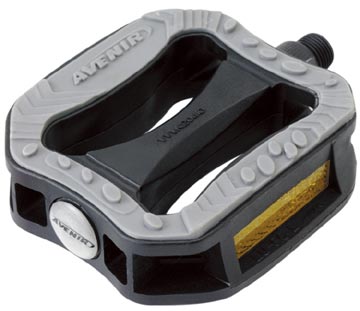 Clipless pedals were new to me.  James F. had recommended these Speedplay Zero pedals because they are dual-sided.  That would save me from having to flip the pedals around to the ‘right’ side in order to clip in.  I just had to align the cleats on the bottoms of my Sidi Genius 5-Pro Mega cycling shoes with the pedals and push down.  An audible click would signify that the cleats were locked to the pedals.  Clipping out of the pedals seemed easy enough to do too.  Rotating my heels outward would release the cleats from the pedals.

I practiced using my clipless pedals in the safety of the parking area in my apartment building.  I pushed one foot down on the pedal, heard a click and felt the cleat engage.  I turned the crank to get the bike moving.  I put my other foot on the opposite pedal and pushed down.  Another click and I was clipped in.  As I circled the parking lot I mentally rehearsed the action to release my cleats from my pedals.  Rotate heels outward.  Rotate heels outward.  I unclipped, came to a stop and put my feet on the ground.  Success!  I repeated the process of clipping in and out or my pedals a dozen times.  Each time without mishap.  I was ready for the road.

My apartment building had a multi-story car park.  I was on the third floor.  I clipped in to my pedals and set off.  I successfully negotiated the turns and ramps down to the ground floor.  I rolled through the car park exit and made the right-turn onto Travis Street.  As I approached the intersection with Walker Street the traffic light turned red.  I squeezed my brakes and lifted my right heel.  My cleat did not disengage from the pedal.  Unclipping had gone so well just minutes earlier.  I lifted my right heel again.  My cleat did not disengage.  Why wasn’t this working?  I was two yards from the intersection.  The light was still red.  Panic rose in my chest.  I yanked my heel up.  And toppled over onto the street.  To the amusement of the six or seven people at this bus stop.

Perhaps it was embarrassment that made the lesson stick.  ROTATE your heels, not lift.