My riding buddies and I, now collectively known as team Flipside, have signed up for a number of 100 km or longer rides this year.  The first was the Janamanjung Fellowship ride.  This ride has been on the cycling event calendar since 2008.  The ride starts and ends on the grounds of the Sultan Azlan Shah power plant, a 2,100MW facility that will bring a fourth 1,000MW unit on stream in 2015.

The power plant is on the Perak coast, 250 km from Kuala Lumpur.  We convoyed to the town of Manjung on Saturday morning.  As is always the case, the drive was punctuated by stops for food.  Marco, Keat and I are enjoying a mid-morning snack of wanton mee in the town of Bidor. 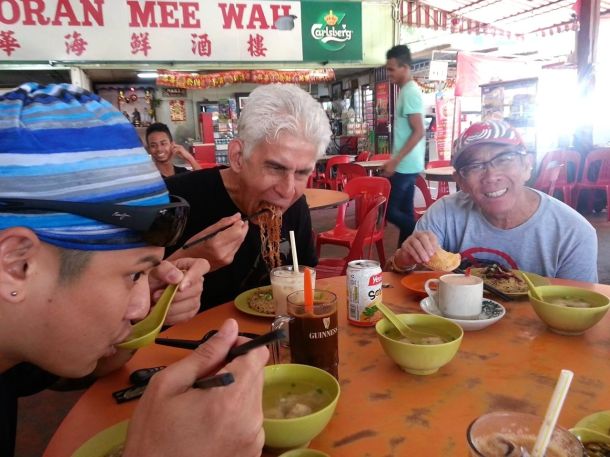 On the way back to his truck, Keat gave in to temptation and bought some jambu air, or rose apples.

Our next stop was at a well-known tourist spot in the town of Teluk Intan.  The Leaning Tower.

We didn’t stay very long as it was an exceptionally hot day.  At least 33° C.

The power plant was our next destination.  We collected our ride numbers, and collectively hoped that it would be cooler the next day.

We met up with Shahfiq and his wife at the power plant.  Shahfiq is from Manjung, so we depended on him to take us to a good place for lunch.  Which he did.

We had dessert at an institution in Perak.  James cendol.  This roadside stall opened for business in 1974.  Since then it has spawned a host of imitators around the country, but I wager that none are the equal of the original.  The stall operator is resplendent in an ever-present red bow tie.  The large photograph in the background is of this lady’s husband, with the Sultan of Perak seated on the right.

The reputation is well-deserved.  The cendol is old-school good.  Thick coconut milk, slightly salty pandan-flavoured noodles, palm sugar, and shaved ice.  No other ingredients required.  There is nothing better on a hot afternoon than an ice-cold bowl of cendol.  Except two bowls of ice-cold cendol. 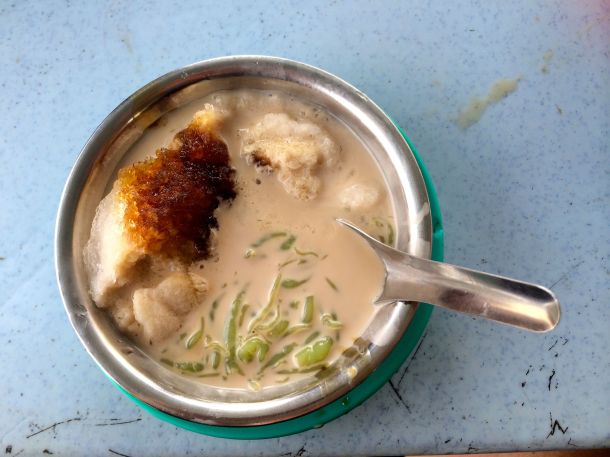 The plan was to go for a bike ride in the evening, but the hot weather deterred everyone.  We were probably better off  napping in our air-conditioned rooms.

Other Flipsiders arrived throughout the afternoon.  The three in a VW combi had a scare when their van decided to take an unanticipated rest. 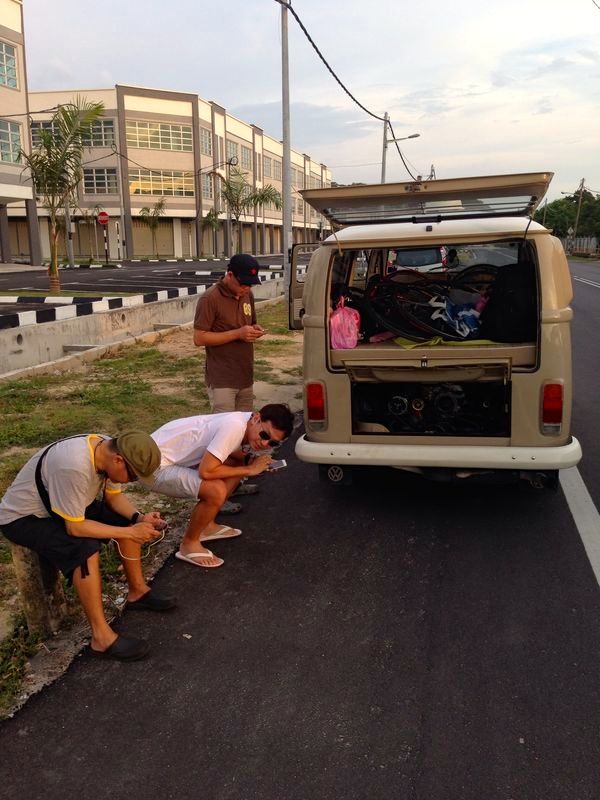 Fortunately the combi got going again once it had cooled down.  So we had the whole group carbo-loading together that evening.

Our hotel was 5 km from the power station, so we all rode to the start.  There were sixteen of us in our brand-new Flipside kit.

About 1,380 of us rode under this arch, through the power plant gates, and out onto the route.

The route was a clock-wise 115 km loop.  The power plant sits on an artificial island, which explains why the map shows the route extending out to sea. 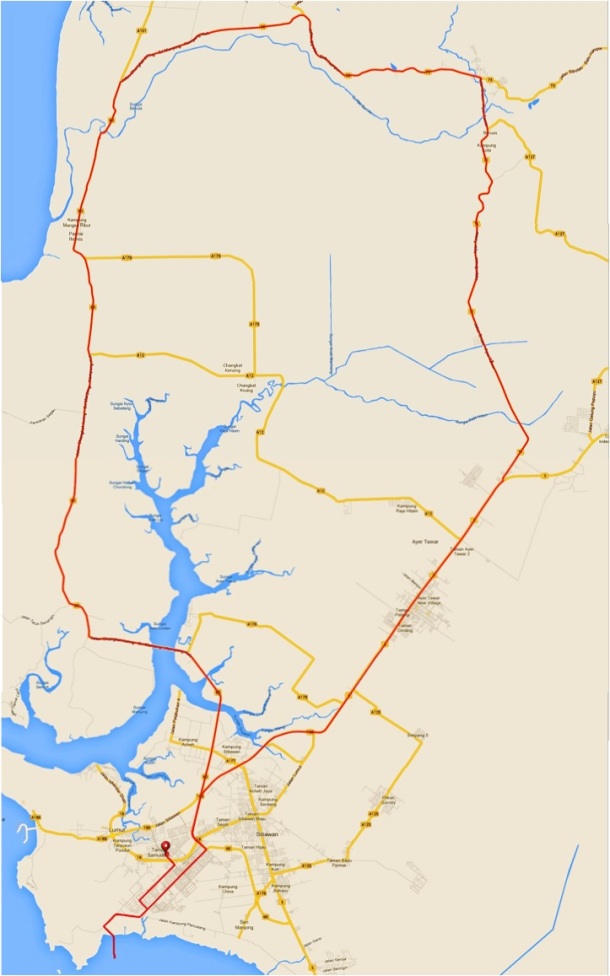 The organization for this ride was excellent.  Especially the marshalling along the route.  There was a large group of marshalls on motorbikes to keep the riders safe through intersections and on the open roads.

We got going a little bit late, which would translate into spending more time in the heat of midday.  The early going was relatively comfortable.  This is one of the nicest cycling event photographs that I have ever been in.  Along with Cedric at the front, and Jason.

The three stops along the route were well stocked with chilled bottles of water and cans of 100PLUS isotonic drink.  Which made for a happy group of Flipsiders. 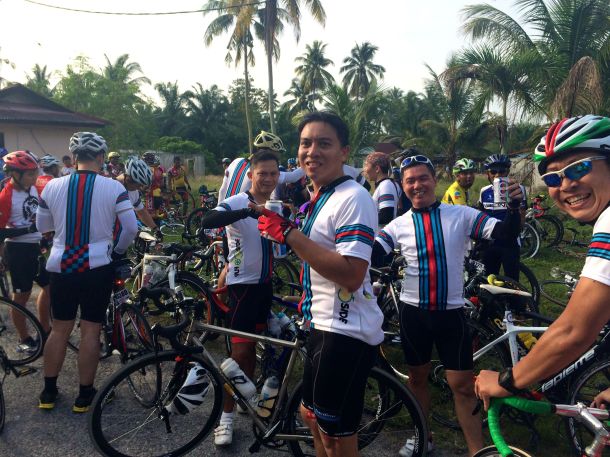 Not long after that first break we had an unscheduled stop.  I made the schoolboy error of taking my eyes off the rider in front of me as we were slowing down for some reason.  I went from 31.5 kph to 20 kph over 60 metres. Then very rapidly to 0 kph.

I have the good fortune to ride with a great group of guys.  They all pitched in to free the jammed chain, and straighten the bar, right shifter and front derailleur on my bike, while a couple of marshals patched me up.  I’ll do a full crash post in a day or so.

Thanks to the efforts of the Flipsiders I got going again.  By then we were the very last of the riders on the road.  Accompanied by some marshals who must have wondered if we would finish in a reasonable time.

By the second water stop at 70 km we had caught up with some riders.  We were well within the pack by the third stop.  Fortunately there was plenty of chilled water at that third stop.  It was not as hot as the day before, but the mercury was nonetheless pushing 30° C when we arrived at the stop.

We were all very very pleased to see a fire truck sending out a steady spray of cool water at the finish.  We need this at all our organized rides. 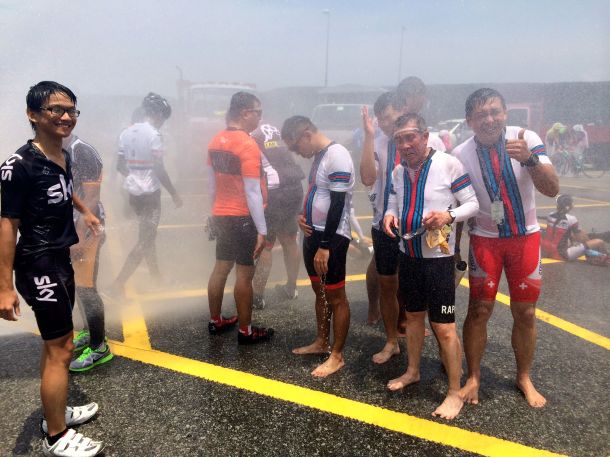 Every Flipsider rode under the finishing arch.  We all had a good time, despite the heat, and the cramps, and in my case scrapes and bruises.

We all left Manjung with one of these.

And more than a few of us started the trip home with a bowl or two of James’ cendol in our bellies.

I left Malaysia in 2008 as a non-cyclist. I am back home now with three road bikes and all the paraphernalia that goes with being addicted to cycling.
View all posts by alchemyrider »
← Recovery Ride
Oh 🔥💀💣💩⚡!! →