Six of us had ridden either about 110 km or 130 km on Saturday.  Four of us turned up at D’Bayu on Sunday for a recovery ride.  The idea was to have a gentle ride to a nasi lemak stall near Kampung Kundang, have breakfast, and then ride back to Bukit Jelutong.

We got to the Kuala Selangor exit fairly quickly.  A sign of things to come.

The breakfast part went as planned.  We stopped at Selera Ria in Kampung Cempedak for the usual food and drink.

The recovery part was anything but.

Granted we went twice as far the day before.  That ride hadn’t feel slow by any means.  We averaged 27.6 kph.

So much for a gentle recovery ride.

What was clear was that I had recovered from the ‘flu that had made all my rides in the preceding two weeks feel harder than normal.  That was most obvious in my heart rate.  My heart rate was at least 10 bpm higher than usual.

This was my Saturday effort.  My average heart rate was 131 bpm. 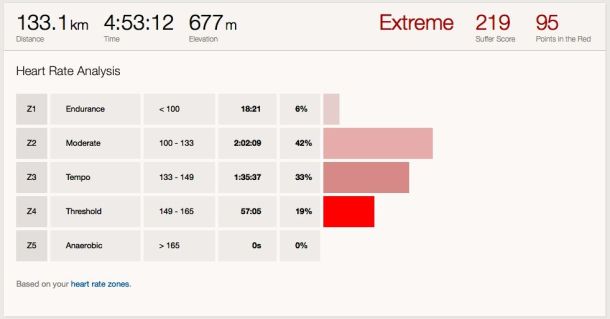 On Sunday my heart rate had settled down.  My average heart rate on this faster ride was 120 bpm.  I spent much less time in Zone 4 – Threshold than I had the day before.  And conversely more time in Zone 2 – Moderate.

So the ride on Sunday was a recovery ride of sorts, despite the higher speed.

I left Malaysia in 2008 as a non-cyclist. I am back home now with three road bikes and all the paraphernalia that goes with being addicted to cycling.
View all posts by alchemyrider »
← Longer Than Planned
Janamanjung Fellowship Ride 2014 →