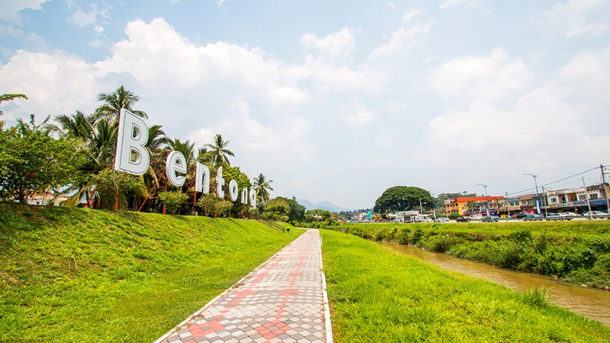 Before 1977, all traffic across the Titiwangsa range used the winding, narrow Federal Route 68, which runs from Gombak in Kuala Lumpur to Bentong, Pahang.  Everyone going to Kuantan, Kuala Terengganu, Kota Bharu, and other points east of Kuala Lumpur drove through Bentong.

Regular readers will know that the climb up to Genting Sempah is popular with cyclists from the Klang Valley.  A more ambitious ride continues to Janda Baik.  Even more ambitious is a ride to Bentong.

The R@SKLs are nothing if not ambitious.  About twenty of us turned up at the Hospital Orang Asli Gombak car park for a 7am start toward Bentong. 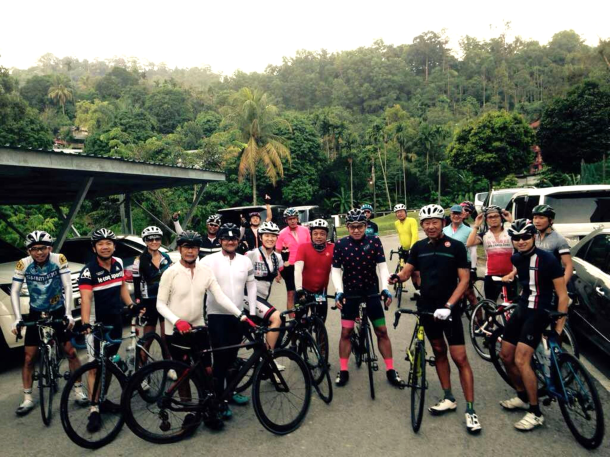 The first 16km / 10mi is uphill to Genting Sempah. 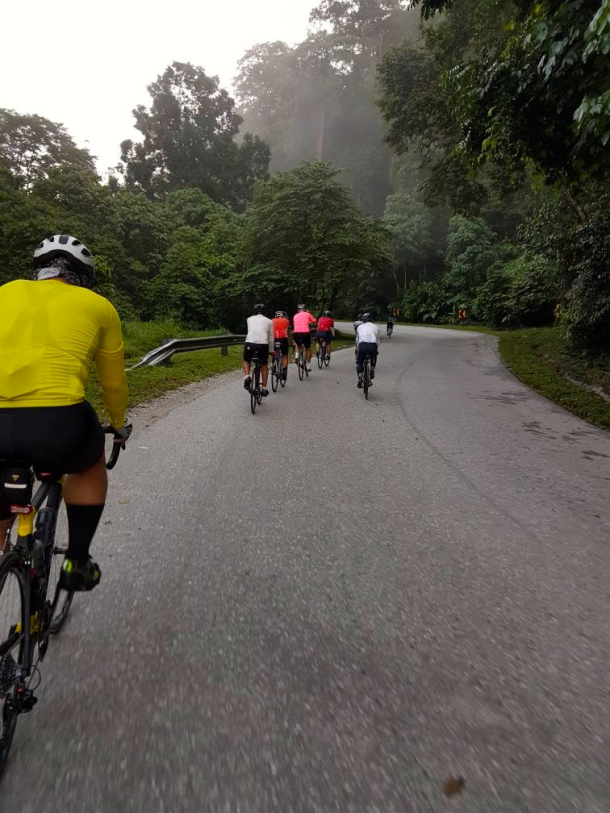 This was early on in the ride.  Clockwise from top left, Luanne, Tomoe and Daniel, Arthur, and Kelin. 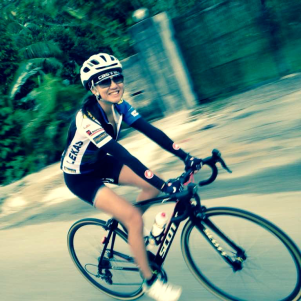 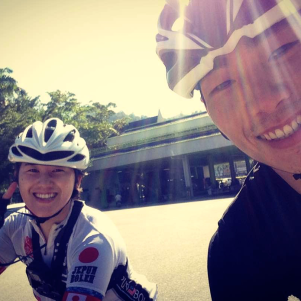 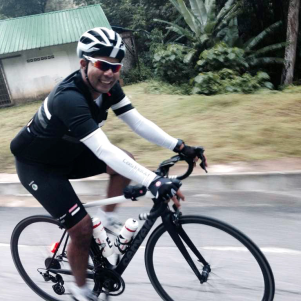 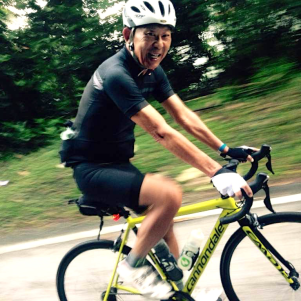 We regrouped under the flyover at Genting Sempah.  Behind us is our support vehicle.  Leonard very kindly provided his pickup and driver.  Plus coolers of ice and drinks.  Top man Leonard! 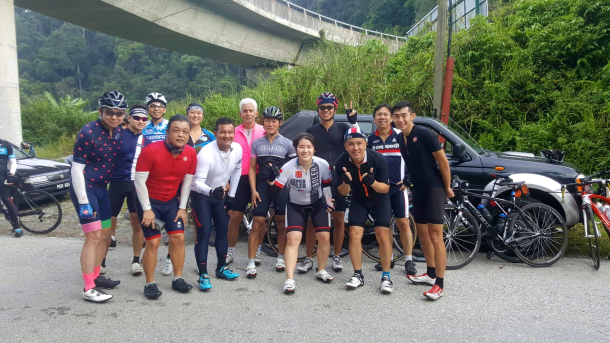 From the flyover we let gravity take over for the 20km / 12.5mi run downhill to the Suria Hot Spring Resort.  We regrouped there before riding the flatter 17km /  10.5mi to Bentong town. 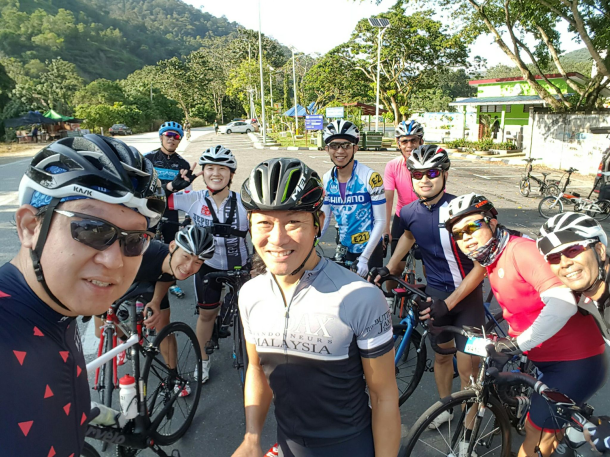 Some of us had the dubious pleasure of being dragged along from the hot spring at up to 44kph / 27mph by Daniel, as he waved his hand in the air, urging us forward.  I for one was glad to see the outskirts of Bentong.

Once in Bentong the only thought on everyone’s mind was food.  We rode into the streets where the Sunday morning market is held, and stopped at Po Lai Kam kopitiam.  We queued to fill our bowls . . . 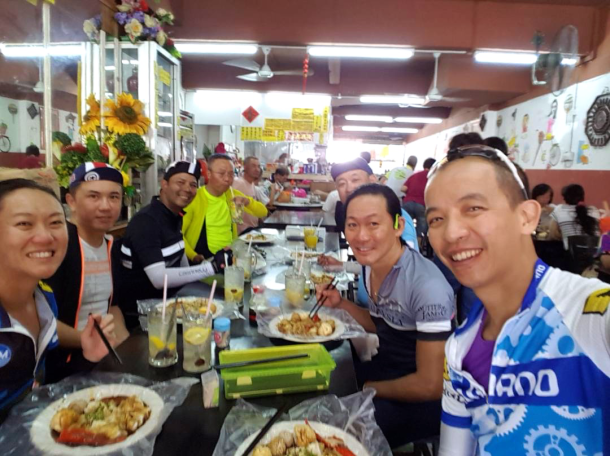 There had been some talk of riding on to the Chamang waterfall.  The consensus on the day was that it was too hot for extra kilometers.

If it hadn’t been a hot spring I might have jumped in. 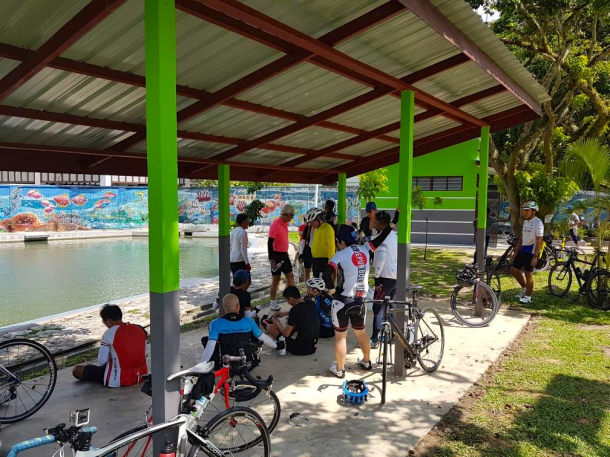 We had all enjoyed the 20km / 12.5mi downhill roll to the hot spring on the way to Bentong.  Now it was time to pay the piper.

After 10km / 6mi and 270 meters / 885 feet of elevation we were ready for another rest.  This time outside the Bukit Tinggi secondary school. 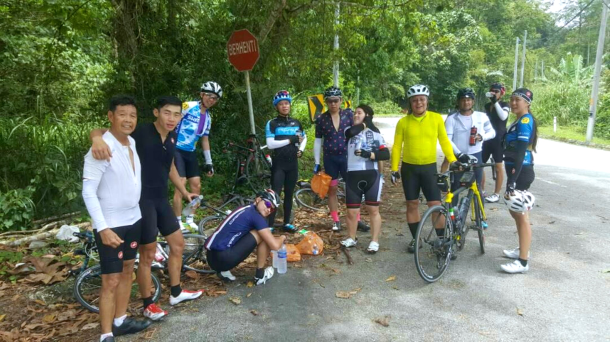 We all got to the Genting Sempah R&R – eventually.  But we couldn’t celebrate yet.  There was still the not insignificant obstacle of Hamburger Hill to surmount.  Exhilarating to descend, but a lung-burning, leg-breaking 81 meters / 266 feet, 6.4% average grade climb over 1.1km / 0.7mi, especially after the kilometers ridden and meters climbed to that point.

Lay, Mark and I delayed the inevitable by detouring to the McDonald’s at the R&R.  I for one needed a sugar boost – in a big way.  McDonald’s delivered.

I might not have been able to get up Hamburger Hill (you see the reason for the name now) without that pie and sundae flooding into my bloodstream.

The other R@SKLs didn’t need a McDonald’s boost.  They had made their way up Hamburger Hill and down to the Hospital Orang Asli car park, and had packed up and left by the time the three of us got there.

As Leonard said, it was fun.  Painful fun at times, but fun nonetheless.

You know what they say about ambition.  It grows.

The R@SKLs have decided that Fraser’s Hill is next. 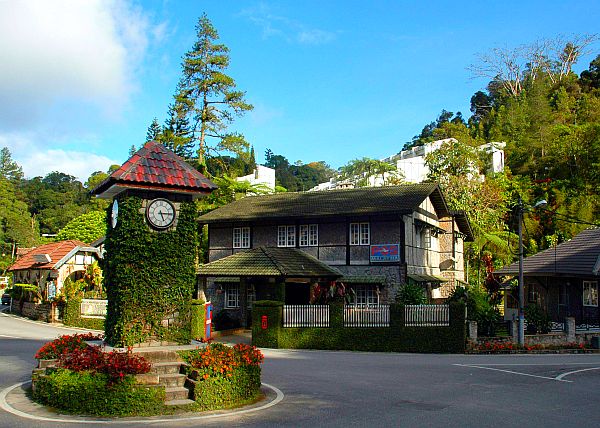 I left Malaysia in 2008 as a non-cyclist. I am back home now with three road bikes and all the paraphernalia that goes with being addicted to cycling.
View all posts by alchemyrider »
← New BB for the Alchemy Eros
Janamanjung Fellowship Ride 2017 →