Thirteen Flipsiders lined up for the second Shimano Highway Challenge.  Eric is missing from the picture below. 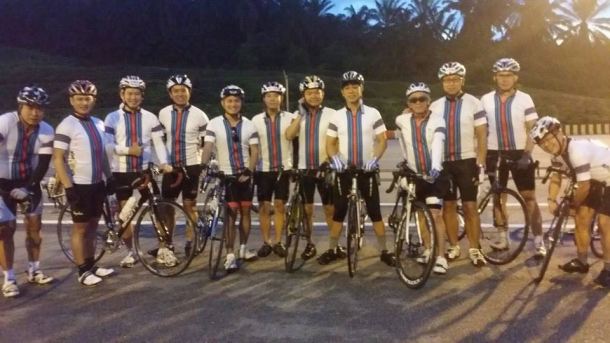 The route was very similar to last year’s edition.  But instead of a rolling mass start, this year’s event had a self-seeding start sequence.  We had to estimate our finishing time; less than 2 hours, 2-3 hours, 3-4 hours, and greater than 4 hours.  If you thought you could finish the ride in under two hours, you set off first.

We all decided which start pen we wanted to be in.  But by the time we finished taking photographs and catching up with friends, the riders in the first pen had started.  So we scrambled to the start, and squeezed in where we could.  I ended up in pen three.

Not that it made a difference.  Those pen 1 people averaged better than 40kph / 25mph.  A tad faster than I am capable of.  In spite of the excellent riding conditions.  A multi-lane toll road all to ourselves, under overcast skies.

The event logistics and organisation were superb.  As they were last year.  From the guides with torches steering us to the parking lots in the pre-dawn darkness, to the smiling volunteers manning the massage booths and the food and drink service at the finish, the support for the riders was outstanding.

One of the things a few volunteers had to do was divert riders around some broken glass in the middle of the highway.  Unfortunately not before at least a dozen riders suffered flats.  Including Marco, who had a cut rear tire into the bargain.  Danny stopped to help, and Shahfiq and I stopped to provide moral support.

Once we got going again I was thankful for the cool weather, as I am sure the other 2,137 participants were.  Especially as we dropped into the small ring / largest cog combination on the KOM Challenge.  A 2.4km / 1.5mi climb that rose 165 meters / 540 feet.  It was a relief to see the arch marking the end of the timed climb.

Not that we were done with climbing.  There were a few more hills to conquer before we got to the opening in the ARMCO barrier that marked the turnaround point.

Around the halfway point I ran into someone I hadn’t seen in a while.  She was in a Flipside jersey to boot.  To top it all off, Sharon’s is the best action photograph of any of the Flipsiders I could find.

It was just starting to warm up when I got to the finish.  I needed a few cups of ice-cold Milo from the green truck in the lower left of the photograph below. 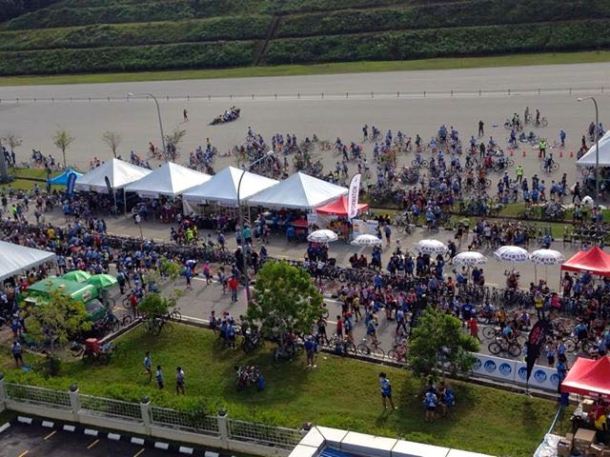 Then we hung out, discussing the ride, while we waited for the rest of the Flipsiders to finish.  Chon, Chris, Griffin and I stood out in the sun.

We should have done what Liang and Kai did.  Take advantage of the shade afforded by a pickup truck.

I didn’t see Eric at all.  Late to the start, and then one of the first to finish.  He had already gone home by the time I rolled over the finish line.

While we were waiting, Keat ran into an old friend from Singapore, whom he hadn’t seen in years.  Cycling events are good places to bump into old friends.

I headed home after the last of the Flipsiders finished.  Medal in hand.

Most of the others went to a post-ride carbo-loading session at a favourite curry mee stall in Broga.

I must say that iced coffee and ais kacang looks good.

(You didn’t think I would write an entire post without at least one photograph of food, did you?)

I left Malaysia in 2008 as a non-cyclist. I am back home now with three road bikes and all the paraphernalia that goes with being addicted to cycling.
View all posts by alchemyrider »
← Johor Masters Century Ride 2014
Grow Your Jersey Collection One Ride at a Time – 2014 →