Road and Rail Back to Kepong We were a bit slow to get going in the morning.  There was some not-necessarily joking about taking the bus or train all the way back to Kuala Lumpur or getting a ride with someone.

We did make the walk to Hollywood at 7.30am.  Plates of prawn chee cheong fun, char kway teow, and lor bak, washed down with glasses of leng chee kang (lotus seed drink) perked everyone up. 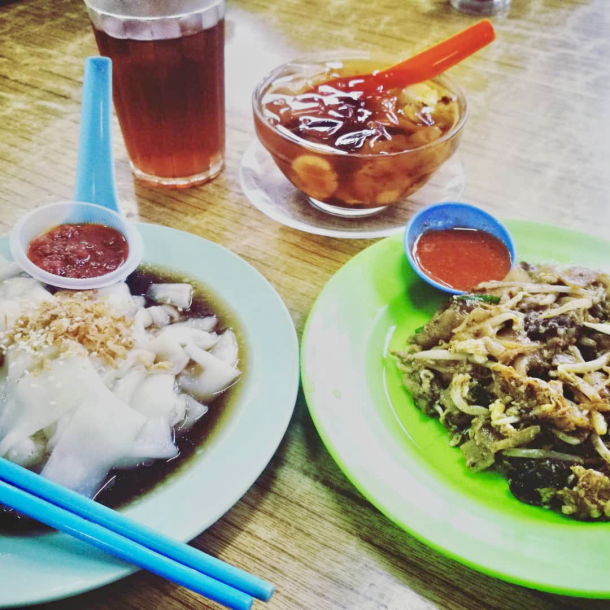 At 9.0am we were packed and ready to roll.  Danial’s friend Eric rode with us to Gopeng before turning around and heading back home. 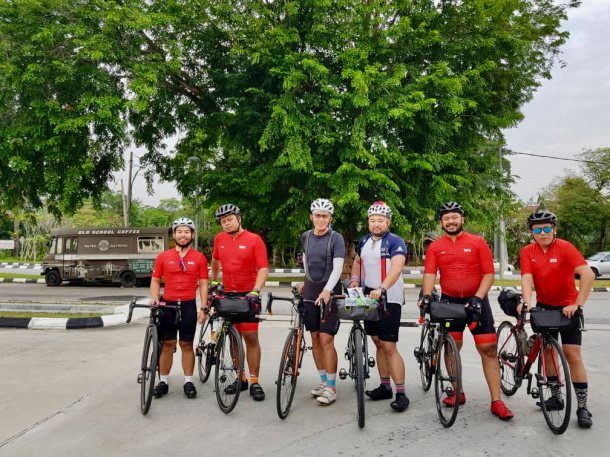 We made a quick stop at the 7-Eleven in the same row of shophouses as the Ampang Cycle House.  Our first proper stop was at a Petron station in Gopeng.  The breakfast drinks had made their way through our bodily systems by then.

The day had started out cooler than it had been the previous day.  Everyone was pleased about that.

37km / 23mi into our ride we were in Kampar.  A Petron station was a convenient place to stop for ten minutes.

At 12.30pm were in Tapah.  The KFC there was a lot less appealing as a lunch venue than it had been the day before.  After some scouting around, we ended up at . . .

Pizza Hut!  That was an underwhelming experience.  The pizzas were smaller than we had expected, there was no ice for our drinks, and the air conditioning wasn’t working very well.  Nevertheless, between us, we polished off three regular pizzas and four 1.5 litre bottles of Pepsi Cola.

The cool of the early morning had given way to full-on heat.  It was 35° C / 95° F outside.  The plan had been to spend an hour in Pizza Hut.  The ineffective air conditioning while we were eating made that seem unlikely.  By the time we were finished eating the air conditioning had upped its game and we finally began to cool off.  And so we stayed there for seventy minutes.

We then spent fifteen minutes at the Petronas station 200 metres down the road eating ice cream for dessert.

Thirty-five minutes later we were in Bidor.  The iced mango and other fresh fruit at the Sakinah stall, where we had stopped on the way to Ipoh, were calling our names.  That was another fifteen-minute break. 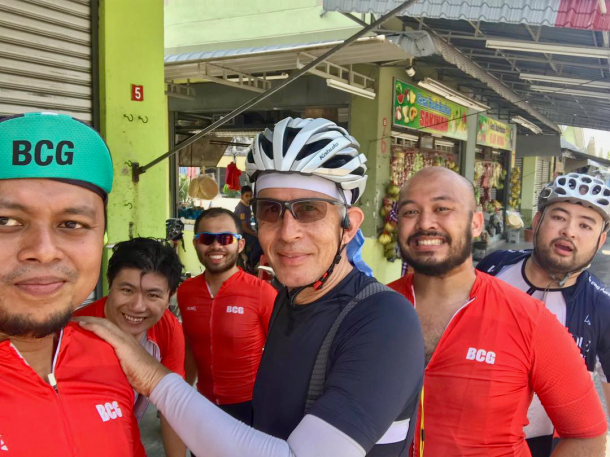 One of the benefits of riding on what used to be the main trunk road linking Kuala Lumpur and Ipoh is that you pass through lots of small towns.  Towns which have at least one petrol station with an air-conditioned convenience store where we could stop and rest.

Sungkai was the next of these towns.  We spent twenty minutes in the BHP station there.  We were not in a rush.  The first non-peak train leaves Tanjung Malim at 7.00pm on weekends.  We had about 45km / 28mi to go, and more than four hours to cover that distance.

It is 22km / 14mi from Sungkai to Slim River.  Just a bit too far to do all in one go, given the temperature and the rolling terrain.  There isn’t much between Sungkai and Slim River, so we stopped in some shade beside the road at the junction to Trolak.

We spent forty minutes at the Petronas station in Slim River.  More ice cream and cold drinks.  That was the good news.

The bad news was that I dropped my mobile phone and broke the screen.

25km / 16mi to Tanjung Malim.  It was 5.30pm when we left Slim River.  The temperature had dropped to 29° C / 84° F.  Enough of the cutting edge had been taken off the heat that we were able to cover those last kilometres to Tanjung Malim in one go.  We stopped at a Petronas station a couple of kilometres from the Komuter station to regroup and get a drink.

We then rode to the KTM station to get tickets for the 8.00pm train to Kepong.  We planned to have dinner during the hour or so before that train departed.  We got to the KTM station at 6.50pm and were told that we could board the 7.00pm train with our bikes.  The train was already at the station.  We quickly hauled our bikes up and across the overpass to the platform on the other side of the tracks and hopped onto the train.

Once again we had the entire carriage to ourselves.

It was dark when we pulled into the KTM Kepong station.  There had been talk about getting dinner before riding home, but by the time we wheeled our bikes off the train at 8.30pm the gloss had worn off that idea.  It had been a long and hot weekend, and everyone just wanted to get home.  Which we all accomplished safely.

This was my first ride to Ipoh.  It was a lot of fun (double pinch flats and broken phone screen aside).  I would do it again.  Any town with its own Hollywood-style sign is worth another visit.

Photograph courtesy of The Malaysian Times

I left Malaysia in 2008 as a non-cyclist. I am back home now with three road bikes and all the paraphernalia that goes with being addicted to cycling.
View all posts by alchemyrider »
← Rail and Road to Ipoh
Actual Route May Vary →