The R@SKLs Ride to Cameron Highlands 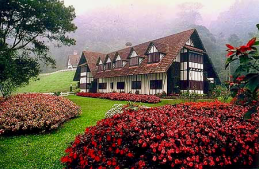 The R@SKLs dispensed with romanticism, opting instead for athleticism.

Most of us had left it too late to register for this event.  Only Tomoe and Danial had signed up before registration was closed.  Eight of us decided to ride “with” Tomoe and Danial.  I say “with” because we would be with them in spirit only.  We would see them once as they raced past us, and not again until after the finish.

There are four ways to get to Cameron Highlands.  From the south via Tapah, from the south-east via a newer road from Raub, from the east coast via Gua Musang, and from the west via Simpang Pulai, on the outskirts of Ipoh.

My only previous ride to Cameron Highlands was in 2013.  I rode along the older road from Tapah through Ringlet, Tanah Rata and Brinchang.

This event started in Simpang Pulai.  We convoyed to the Hotel Pulai on Saturday evening.  The weather enroute did not look promising.

We all hoped that we would not have a repeat of our rain-filled Southern Thailand experience.

One doesn’t visit Ipoh without eating.  Nga choy kai (beansprout chicken) is at the top of many foodie lists of must-eats in Ipoh.  Restoran Ayam Tauke on Jalan Guntong has a deserved reputation for excellent nga choy kai and sar hor fun (flat rice noodles).

Waiting for our food.

While we were waiting, Simon went to a restaurant a few doors away and brought back appetizers.  Chicken lor bak (chicken and vegetables rolled in thin bean curd skins and deep-fried), fried wantan (dumplings), and boiled and fried yong tau foo (stuffed bean curd).

Simon had to leave a deposit to ensure that he brought the empty dishes back to the other restaurant.

Ipoh’s taugeh (bean sprouts) are the king of bean sprouts in Malaysia. Thanks to the abundance of hard water from the limestone hills surrounding the Kinta Valley, bean sprouts that grow here are crunchy and succulent.

Not sated by the nga choy kai, we then sat down at the restaurant where Simon had procured our appetizers.  The wan tan and lor bak were finished, so we had wing beans fried in chilli garlic oil, pork noodles, and beef soup.

Surprisingly, after that huge dinner – wait, I take that back.  I am talking about the R@SKLs here.

Unsurprisingly, despite the huge dinner, we wanted breakfast at 6.00am.  Which was delayed slightly, because as we waited outside the hotel for everyone to gather, one of CK’s inner tubes exploded.

After noodles, coffee and tea, Tomoe and Danial rode the 4km / 2.5mi to the race start at the Symphony Suites Hotel.  They would start racing at 7.30am.

The eight of us ghost riders headed back across Jalan Raja Dr. Nazrin Shah to the A181, and upward to Cameron Highlands. 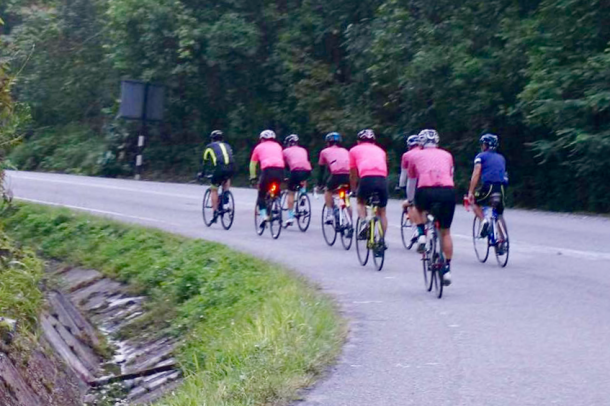 The Simpang Pulai route is preferred by cyclists over the Tapah route because the road surface is better, and the shoulders are wider. 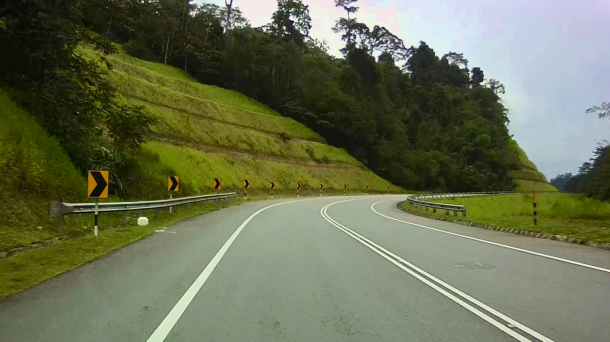 As I said earlier, we didn’t actually ride with Tomoe and Danial.  We were on the road at 6.50am.  I think we perplexed a woman standing expectantly by the roadside, waiting to cheer on a boyfriend or husband.  A pair of police motorcycle had roared past her a minute or two earlier.  That is the usual signal that the race leaders are approaching.  But instead of next seeing a fast-moving peloton sweeping by, she was confronted with the sight of a group of shall we say mature men, riding at less than race pace.

Despite the forty minute headstart, the leading riders, and then Tomoe and Danial caught up with us after 20km / 12.5mi.  This was all we saw of them until the finish.

The rest of us santai-ed (relaxed) our way up the road. 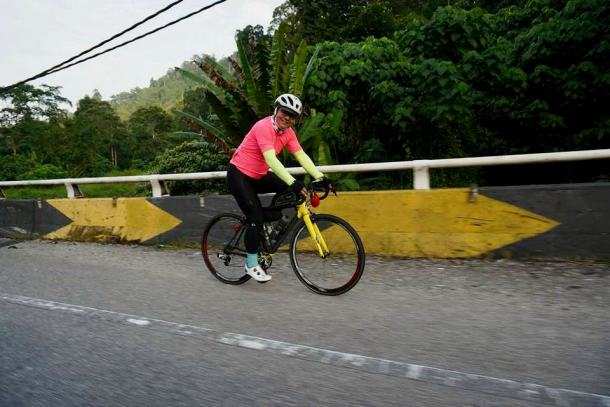 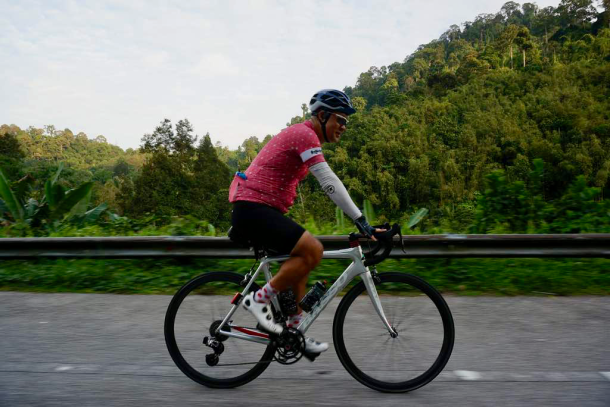 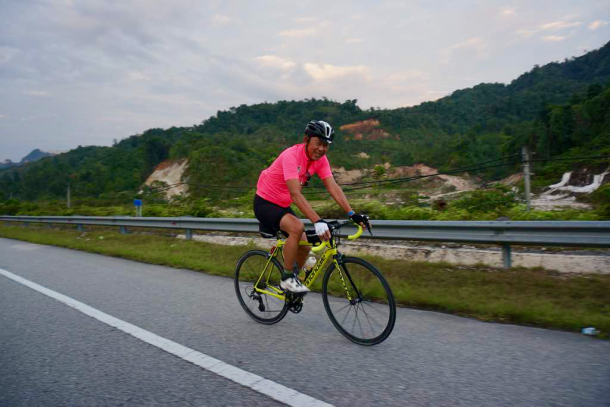 We had a pair of support vehicles stocked with water, 100-Plus, bananas and biscuits.  Shelby took excellent photographs.

She was in a car driven by Chew’s wife Alicia

Man provided sterling roadside repair support from the other vehicle tracking us.

We stopped a number of times to regroup.  At 30km / 19mi we had a longer stop to get drinks and bananas. 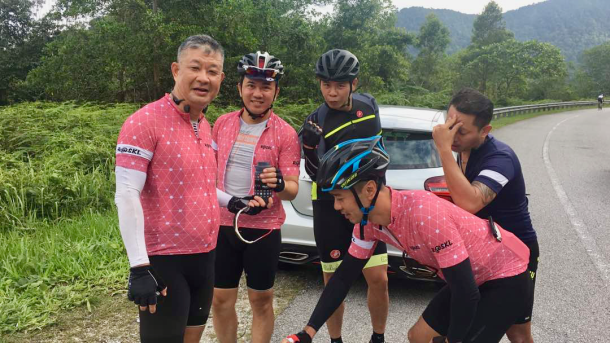 That Basso Diamante is a sweet-looking bike.

Not long after we got going again we had the second, and last, flat of the day.

At 45km / 30mi we came to the second water stop for the race participants.  There was a nice view over the valley, and the road we had just ridden up.

I think the road branching up and curving to the left goes to a large farm.  The road looks rideable, but we weren’t about to try it on this day.

2.5km / 1.5mi later we crossed the border from the state of Perak into the state of Pahang.  Along the way we rode through a 355 meter / 1,130 foot rock shed, built to shield the road from mud and rock slides. 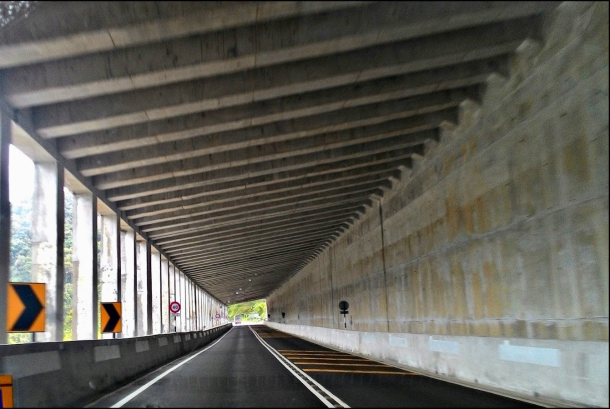 The border is marked by a large sign on the side of the hill.  Tomoe and Danial had ridden to the finish 7km / 4mi further up the road, and come back down to this point well before the rest of us go there.

We rolled over the undulating terrain to the finish, which ended with a 75 meter / 246 foot kick over the final 2km / 1mi.  Simon’s brand-new bike had been christened with a major climb. 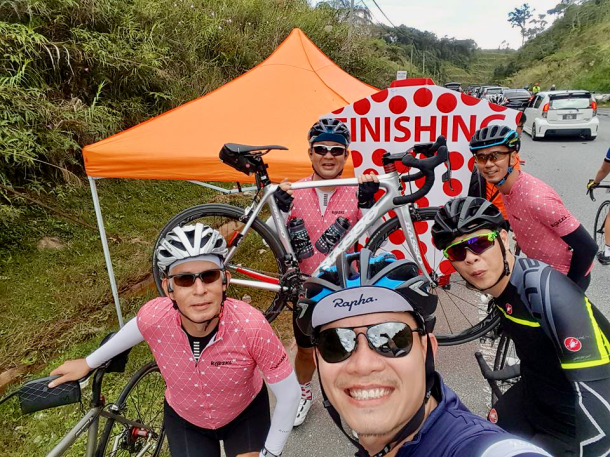 The weather had occasionally looked threatening, but the rain never came.  The cloud cover kept things cool during our ascent.

Everyone made it up the climb.  Arthur had a message for the R@SKLs who didn’t ride with us. 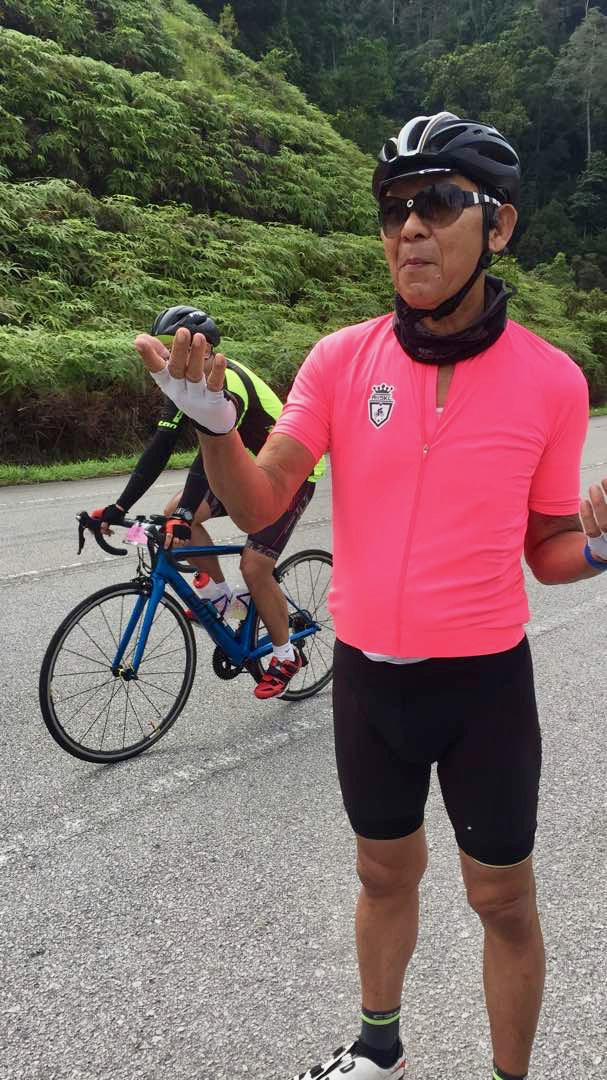 A cold shower was just the ticket.  The receptionist at the Hotel Pulai was very nice, and she let us check out after 3.00pm without extra charge.  At RM80 / USD20 per night for a double room, basic but clean and comfortable, and bicycle friendly, the Hotel Pulai was an excellent choice.

Everyone was starving.  Nasi kandar is another Ipoh favourite.  It is so named from the time when nasi (rice) hawkers would move from place to place with a kandar pole on one shoulder, balancing large containers of rice meals hanging from either end of the pole.

Kedai Kopi Yong Suan is famous for their nasi kandar.  Nicknamed nasi ganja.  It is said that the rice is so delicious that it is as addictive as ganja (cannabis or marijuana).

We went there.  It was a somewhat underwhelming meal.  Admittedly we were late, so most of the food was finished.  The usual selection of side dishes had been reduced to just two:  fried chicken and salted egg.

As the saying goes, beggars can’t be choosers.  The final blow was that by the time we had finished our meal, the chendol man, who was outside when we got to the restaurant, had sold out, packed up and gone home.

Some of us went looking for more food.  Some of us hit the highway back to KL.  Arthur and Simon opted for some pampering before heading home. 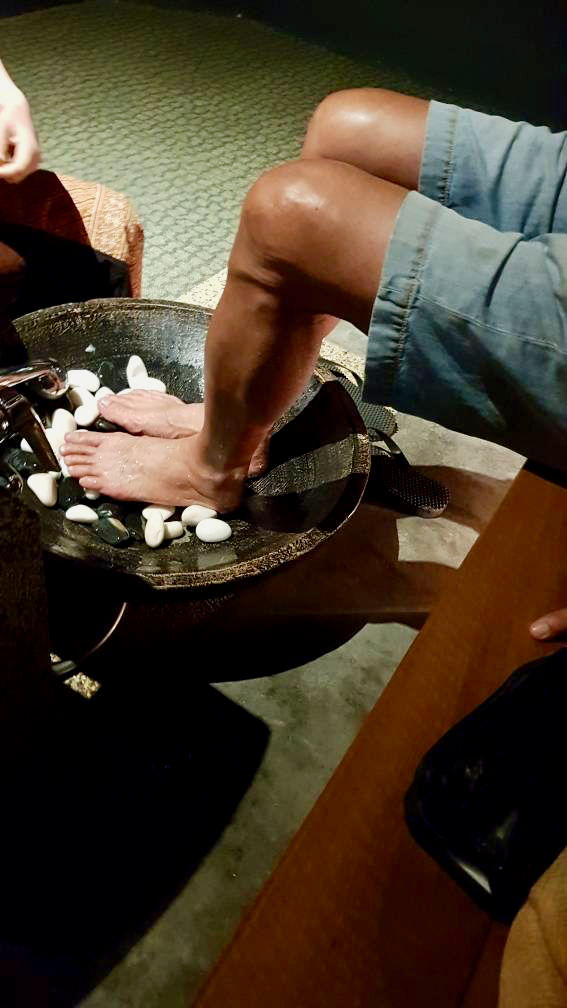 I left Malaysia in 2008 as a non-cyclist. I am back home now with three road bikes and all the paraphernalia that goes with being addicted to cycling.
View all posts by alchemyrider »
← R@SKLS IN SOUTHERN THAILAND: DAY 4
Geometric Progression Weekend →