So How Much Do You Spend on Cycling? 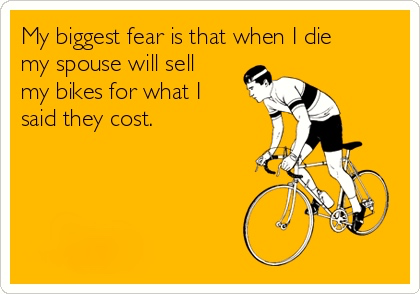 This is a popular meme, available on mugs, T-shirts, hip flasks, canvas, posters and probably anything else that can be printed on.  Fortunately I don’t need to resort to creative accounting with my Biker Chick.  I can spend what I like on cycling.  And she can spend what she likes on her hobbies.  It is a good partnership.

But how much has this hobby cost me?

The biggest chunks of change went, of course, into the purchase of my bikes.  I have owned four road bikes since I started cycling in early 2010.

My first two bicycles have been sold.  The sale date CPK for my steel Alchemy, bought in January 2010, is USD 0.20 per kilometer. 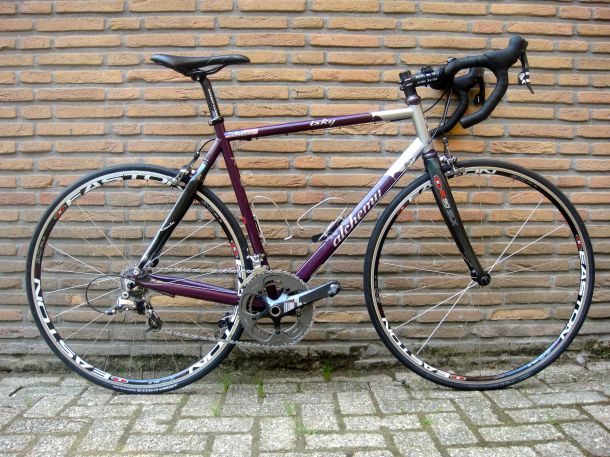 My titanium and carbon Alchemy, bought in November 2011, ended at USD 0.38 per kilometer.

I put 32,700km into those two bikes before I sold them in August 2015.  Their CPK figures are after deducting the selling prices from the purchase prices.

Bike number three, my titanium Ritchey Break Away bought in March 2013, is currently at USD 0.53 per kilometer.

And my titanium Alchemy Eros, bought in July 2015, is already at USD 0.52 per kilometer.

So far I have ridden a combined 23,000km on the Ritchey and the Eros.  The CPK for the Eros will go down faster than that for the Ritchey because I ride the Eros a lot more.  I already have more mileage on the Eros than I do on the Ritchey.

You could argue that defining the cost of my bikes in terms of cost per kilometer is a fudge.  Just another form of creative accounting that masks the true purchase price.  I like cost per kilometer.  It is a bit like depreciation of a fixed asset, but linked to the usage of that asset.  If I can get the CPK of my bikes down to USD 0.20, the money to buy those bicycles will be money well spent.

So that is the my fixed cost of cycling.  The bicycles themselves.

Then there is the variable cost.  The cost of everything else that goes with cycling.

Over the years, the second largest amount of money I have spent has been on clothing and shoes.  Not helped in the least by the need to buy separate gear for winter and summer temperatures.  While I lived in Houston and Den Haag I owned cold weather versions of everything:  cycling shoes, shoe covers, socks,  bib longs, tights, long sleeved jerseys, base layers, arm warmers, jackets, gloves, hats, and even a balaclava mask. 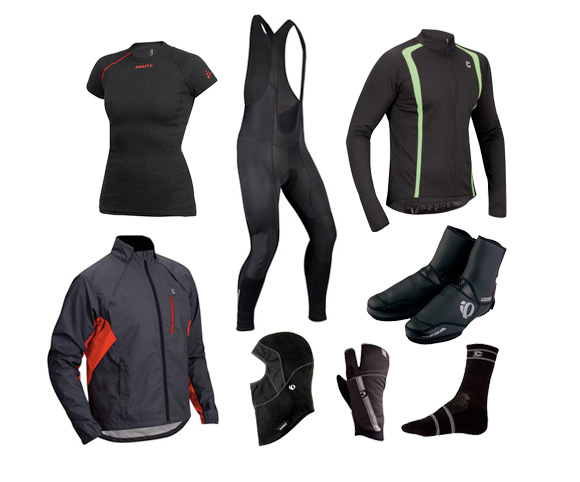 Next come accessories, gadgets and upgrades.  I’ve bought helmets, saddle bags, saddles, mini pumps, CO2 inflators, bottles and bottle cages, lights, bells, bike locks, and rear-mounted and roof-mounted bicycle car racks.  I’ve bought bike computers, and an indoor trainer. I have so far, however, resisted the gadget du jour, a power meter.  I have upgraded a set of wheels and a handle bar, and switched a standard crankset for a compact crankset.

All cyclists end up owning some tools.  At the bare minimum, they have tire levers, a set of hex wrenches and a floor pump.  Those who do their own bicycle maintenance also own a selection of other tools.  These could include a cassette removal tool, a pedal wrench, a chain whip, a chain breaker, a torque wrench, spoke wrenches, cone wrenches, torx wrenches, cable cutters, a bottom bracket removal tool, and perhaps even a wheel truing stand.   I don’t have a truing stand, but I do have a work bench and a repair stand.

There is a surprising amount of money hanging on that pegboard.

In the maintenance vein are the costs of keeping my bicycles on the road.  I regularly spend on consumables like tires, inner tubes, chains, brake pads, cables, bar tape, and bearings.  I also had to buy new shifters to replace the ones broken in crashes, and replace a cassette that had been damaged by my riding for too long on a worn chain.  If you take your bicycle to a shop for a general service, that costs too.

Finally, riding in organised events is challenging and fun, but not free.  There are registration fees, and if the event is in another state, travel and accommodation costs come into the picture.

So it turns out that I have spent quite a bit on my hobby to date.  I estimate that over the seven years I have been a road cyclist, I have spent about USD3,000 per year on clothes, gizmos, parts and spares, etc.  And will probably continue to spend similar amounts in future years.

I will be the first to admit that my fixed and variable costs are higher than they could have been.  I could still be riding that steel Alchemy, and not bought three other bicycles.  I own more jerseys and bib shorts than are really necessary.  The wheels that I upgraded from were perfectly serviceable.  I could do more bike maintenance myself, rather than sending the bikes to a shop.

However I enjoy researching all the latest and greatest gear, making a selection from the myriad of choices, and then owning and appreciating a quality jersey, or bicycle component, or tool.  It adds to the appeal of cycling.

But it could be worse.  Much worse.  I could be into high-fidelity sound reproduction for instance.  A Sennheiser Reference Orpheus Headphone System, anyone? 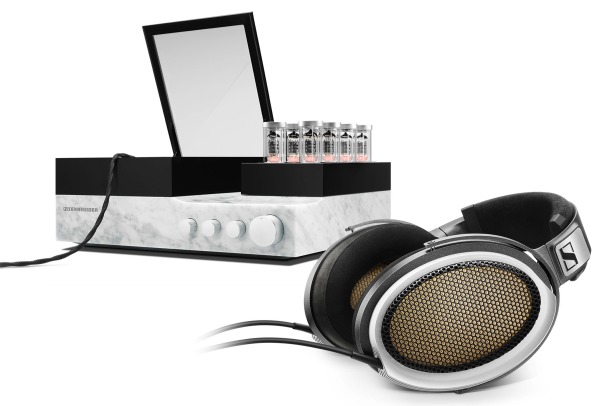 Posted in Cycling in Malaysia, Gear and Tools. Bookmark the permalink.

I left Malaysia in 2008 as a non-cyclist. I am back home now with three road bikes and all the paraphernalia that goes with being addicted to cycling.
View all posts by alchemyrider »
← My Local Bike Shop (LBS)
Another Udang Galah Dinner – Courtesy of the Bukit Bintang Rotary Club →