A New Set of Hills

Kuala Lumpur sits within the Klang Valley.  It is bordered by the Titiwangsa Mountains in the east, several minor ranges in the north and the south, and the Malacca Straits in the west.

Which explains why so many of our weekend rides include climbing to a greater or lesser extent.  The only options for truly flat rides are along the KESAS Highway heading west from Subang toward Bandar Botanic and Morib, and northwest of Kundang through Ijok and Kuala Selangor.

Leslie suggested a ride to Hulu Yam, which is due north of Kuala Lumpur.  If I had thought about it I would have realised that the odds were that this new route (to me anyway) features some climbs.  Boy, does it ever feature some climbs.

Ten of us started the ride by meandering from Mont Kiara through Segambut and Sentul to avoid the roads closed to accommodate the Standard Chartered KL Marathon.  We left the city limits at Batu Caves.  Just after the right turn off Jalan Sungai Tua onto Jalan Hulu Yam Baru – Batu Caves, Leslie said “Here’s where the fun begins!”

We stopped to catch our breath by the reservoir behind the Batu Dam.

And again at the top of the looong climb.  The usual suspects are here (after we had recovered, I hasten to add), plus Lay on the right. 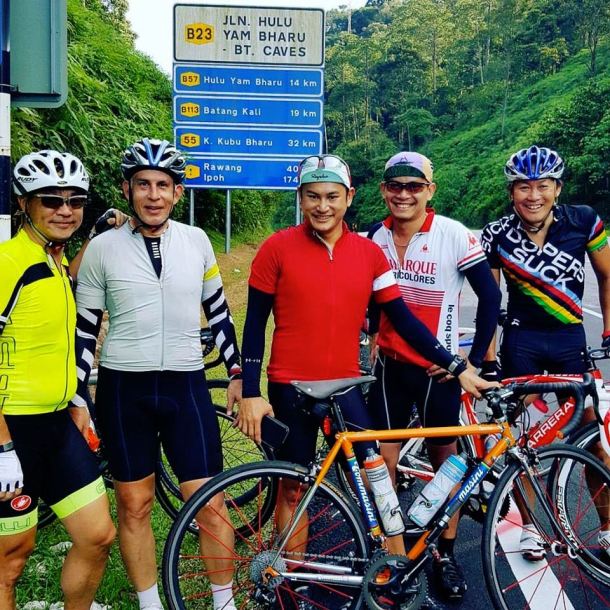 After speeding down the descent to Hulu Yam Bharu, we raided a 99 Speedmart for drinks and snacks before turning left onto Federal Route 1 toward Rawang.  Federal Route 1 is the oldest and longest road on the Malaysia’s national road network.

We regrouped on the outskirts of Rawang.  It was almost 11am, which translates into hot.  A roadside stall selling fresh fruit juice was a perfect place to stop.

Then it was into Rawang for the main attraction of the day.  Lunch.  It took a while to find, but Leslie was persistent.  This restaurant has been featured in many a food blog and television show. 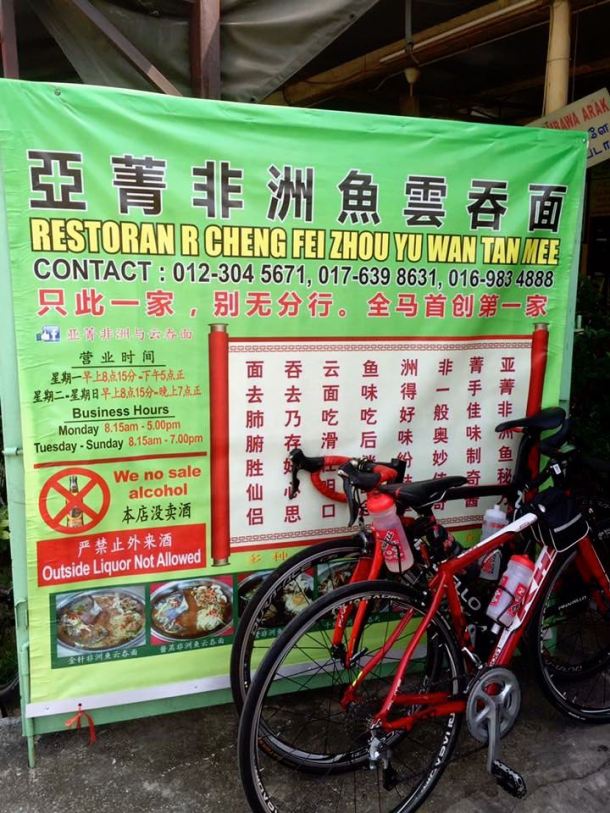 The speciality of the house is tilapia with wan tan noodles.  There are six variations to choose from:

All but one of us ordered the deep fried in soy sauce version, many with an extra portion of wan tan noodles.  The other order was the Classic style.

When we were done eating, there was nothing left on anyone’s plate.  Even the deep-fried fish bones were crunchy enough to eat.  Definitely worth the visit.

Marco, Lay and I started down the descent in pursuit of Mark and Henry ahead of us.  We had lost sight of them.  I shot past this exit at 70kph / 43.5mph, followed by March and Henry.  We should have left Jalan Rawang here, where the road transitioned into Jalan Kuching. 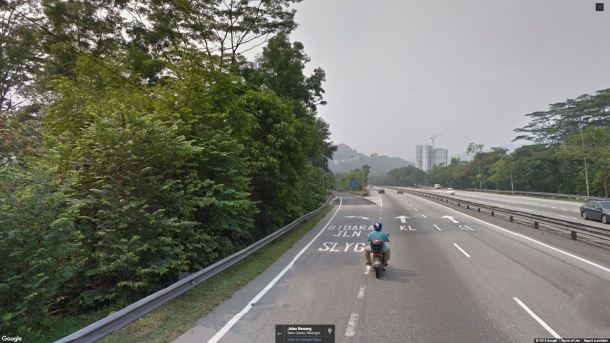 Instead, we rode some 6km / 3.7mi further down the road before we came to the realisation that Henry and Mark were no longer ahead of us.

Not knowing any other way to get back to Mont Kiara, the three of us dodged and weaved our way through very heavy traffic along Jalan Kuching for 7km / 4.3mi, until we could exit at the Segambut roundabout.  I don’t want to repeat that experience again.

All’s well that ends well though.  Everyone made it safely back to where we had started from.

I think I’ll put the Hulu Yam climbs in the “Been there, done that” category.  At least until I forget the details.  Like Leslie claims to have done before he invited us all on this ride. 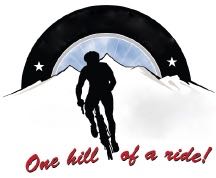 I left Malaysia in 2008 as a non-cyclist. I am back home now with three road bikes and all the paraphernalia that goes with being addicted to cycling.
View all posts by alchemyrider »
← We Meet Again Mr. Dragon’s Back
N8 Endurance Drink Mix →