Thirteen Flipsiders made the 140km trip to Malacca.  We all drove down on Saturday, mostly two to a car.  Eleven of us squeezed ourselves into a three bedroom apartment at the Bayou Lagoon Park Resort.  Keat and Shahfiq, perhaps wisely, stayed elsewhere.

Lots of other cyclists were already there.  There was a long queue to check in.  Stephen, Marco, Stephen and I hung out in front of the resort while we waited.

We had a nice view from our apartment.  The water park was inviting.  I thought about having a dip.

But the need for food won out.  We all jumped into Stephen’s Volvo and Justin’s pickup and drove to the closest open air hawker center, in Bukit Beruang.

My first choice was popiah.  This was the stall.

And this was the popiah.  Vegetarian, and yummy.

I bought three servings, which didn’t last long.  Then it was on to a variety of other fuel for the upcoming ride.

Despite the evidence to the contrary, I assure you we were in Malacca to ride.  Bicycles were scattered all around the sitting room in the apartment. 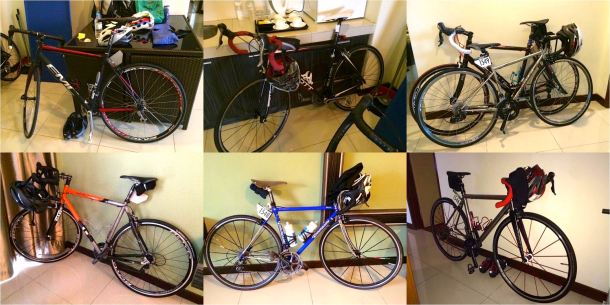 I had a new helmet.  Chon, Kai Yang, Marco and I made up a Kabuto helmet foursome.

While 2,672 riders were ready to start at 7.00am, the invited dignitary was not.  As happens all too frequently, the official bigwig who had agreed to flag off the event was late.  We eventually got away at about 7.30am.

We rode to the coast and then headed clockwise to Kuala Sungai Baru.  From there it was due east almost to the border with the state of Johor before we cut back through Jasin (where my biker chick went to secondary school) to the finish.

We expected the day to warm up.  And it did get very hot.  We didn’t expect the 1,000 meters of climbing over the second half of the ride. 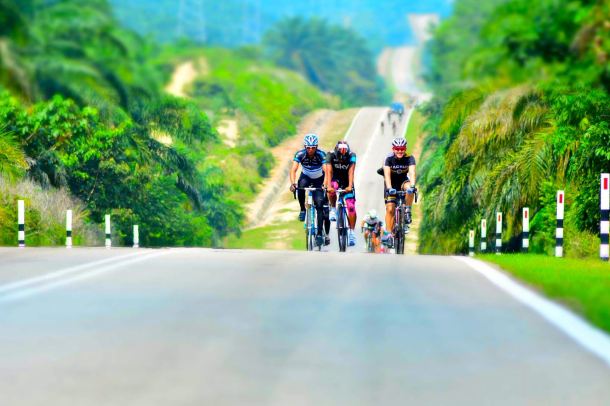 The heat and the rolling terrain took its toll.  The stronger Flipsiders like Eric, Mark, Kai Yang, Chon and Marco soon left the rest of us behind.

This is Keat and I toiling away, with matching shoes on our feet and grimaces on our faces. 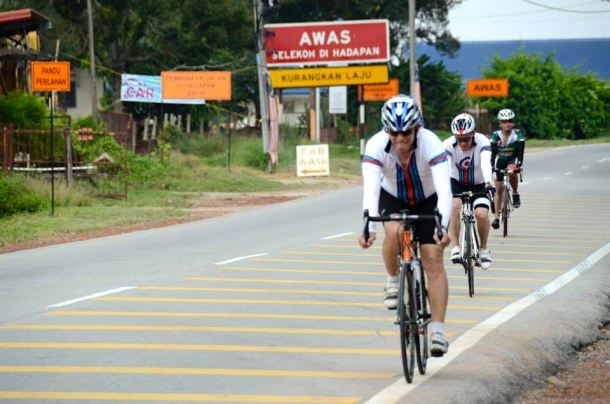 The ride was relatively well organised.  The marshalling at intersections and junctions was good.  The directional signage was good.

Unfortunately the organisers underestimated the volume of water needed at the stops.  A major post-ride complaint from participants was that there was no water left at the second and following stops.

I rode through the first rest area at 50km, and made a stop at a petrol station after 65km, at Masjid Tanah.  That proved to be the strategy to follow.  Depend upon petrol stations for cold fluids rather than depend upon the water stops along the route.  The petrol stations had the additional attractions of ice cream and air-conditioning.

My next stop was unplanned.  I heard my name called as I rode through Macap Baru.  The speedsters were chugging down fresh coconut water at a roadside stall.  Only in Malaysia. 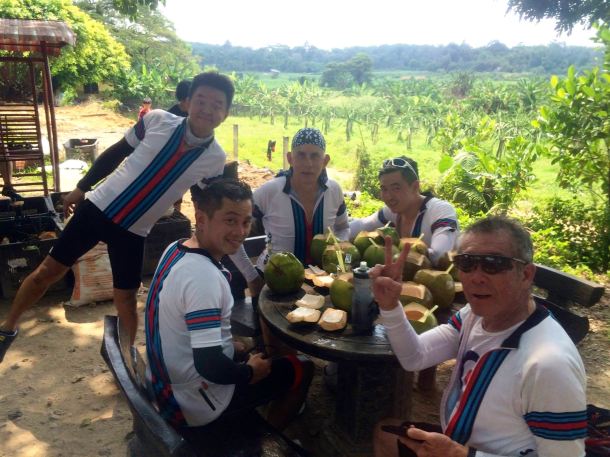 The unexpected twist was that the seller stored the young green coconuts in a chiller.  A few whacks with a cleaver exposed sweet and very cold liquid.  There are twelve coconuts on our table in the photograph above.  Testament to how good they were.  I drank one on the spot and poured the contents of a second into a bidon.

I put my full repertoire of “stay cool” tricks to use on this ride.  Those tricks can be summarized as pouring lots of fluid down my throat to stay hydrated, and pouring lots of fluid over my head and upper body to increase heat loss via evaporation.  I also wore a cap and had a bandanna around my neck to help with staying cool.

I met Catheryn at this stop.  She was doing her first century ride.  She reads this blog, and said that my suggestions for keeping cool were helping her.  Catheryn, I do hope that you finished the ride, and that you will be able to join the Flipsiders on our regular weekend rides.

We set off again as a group, and I managed to stay with everyone else over the 10km to the final water stop at the 110km mark.  Not that there was any water to be had there.  We stayed just long enough to catch our breath.

I rode the next 20km with Chon.  We were still in hill country.  It was also well into the hottest part of the day.  We both needed a petrol station.  The Shell station in Jasin was a welcome relief.  All hail ice cold chocolate milk.  And air-conditioning.

From Jasin it was 20km to the finish.  Chon and I caught up with Danny as we left Jasin.  We rode together for a while.  I felt good enough to take a pull on a climb, and when I looked back after a kilometer or so I found that I was alone.

The strategy of managing my effort, especially as I was climbing, to keep my heart rate as low as possible had paid off.  I finished the ride with an average heart rate of 128bpm.  More importantly I didn’t cramp at all, and I finished the ride feeling strong, rather than feeling absolutely shattered, as I have done in the past.

Nevertheless, my body temperature was pretty high.  The shower at the finish, courtesy of the local fire department, was greatly appreciated.  I stood in that spray for a long time.

Danny, Marvin and Justin (in the official ride jersey), finished soon after me.

As did Keat, and the two Stephens.  The only non-finisher was Shahfiq, who suffered a flat tire with 20km to go.  And discovered that he had a faulty spare tube.

Like the rest of us however, Shahfiq ended the day with a sun tan, and one of these.

I left Malaysia in 2008 as a non-cyclist. I am back home now with three road bikes and all the paraphernalia that goes with being addicted to cycling.
View all posts by alchemyrider »
← Kilometer by Kilometer
Johor Masters Century Ride 2014 →