RSS Feed
← My Name is alchemyrider and I am a Bikeaholic
Still Too Wet to Ride? →

Too Wet to Ride?

That first book was “The Rider” by Tim Krabbé.  Krabbé puts the reader inside the head of a competitor in a French cycling race, the Tour du Mont Aigoual.  Krabbé captures in tremendous detail the nuances of road-racing strategy, mixed in with snippets of cycling history.  I was hooked on cycling books.

I have since filled a 90cm / 35.5in shelf with cycling books.  Some are easy to classify.  Books about individual cyclists for example.  Toward the right side of the shelf sits “Put Me Back on my Bike: In Search of Tom Simpson” by William Fotheringham.  The ultimately tragic story of a man best remembered for dying on the slopes of Mont Ventoux during the 1967 Tour de France.

William Fotheringham also wrote the next rider biography on my bookshelf, “Fallen Angel: The Passion of Fausto Coppi.”  The life story of perhaps the greatest of Italian cyclists.

William Fotheringham appears again on my bookshelf, this time as the author of “Merckx: Half Man, Half Bike.”  Eddy Merckx is widely considered to be the greatest professional cyclist ever.  He won 525 races during his career, including five Tours de France, four Giros d’Italia and three world championships.

Frederico Bahamontes was known as “The Eagle of Toledo” for his exceptional climbing ability.  He won numerous King of the Mountains classifications in all three major tours.  He also won the Tour de France in 1959.  His story is told by Alasdair Fotheringham, brother of William.

The last biography I have is about Jacques Anquetil.  Anquetil is another giant of the sport.  The first man to win five Tours de France.  His personal life however overshadowed his achievements on a bicycle.  Paul Howard recounts all in “Sex, Lies and Handlebar Tape.”

There are autobiographies as well.  The first of these in my collection, starting from the right side of the shelf again, is “Tomorrow We Ride” by Jean Bobet.  Jean is the younger brother of Louison Bobet, the first man to win 3 Tours de France in a row. 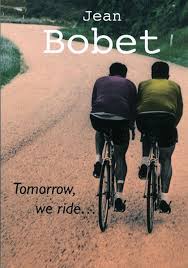 Vin Denson‘s memories of his professional cycling career during the 1960s, including being the first British cyclist to win a stage of the Giro d’Italia, are in “The Full Cycle.”

Tony Hewson, in “In Pursuit of Stardom: Les Nomades du Velo Anglais,” tells an extraordinary tale of three British cyclists who venture into France in the 1950s to try their hands in the European road racing scene.

Laurent Fignon is perhaps best known as the man who lost the 1989 Tour de France to Greg LeMond by a mere 8 seconds.  He should be better remembered as a man who won the Tour twice and the Giro d’Italia once.  These and other victories are described in “We Were Young and Carefree.” 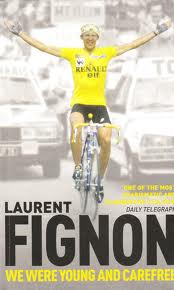 Bob Roll is next.  He is a former Tour de France racer and member of the U.S. Cycling Hall of Fame.  He offers his unique perspective on the professional racing circuit in “Bobke II: The Continuing Misadventures of Bob Roll”.  There is a “Bobke:  A Ride on the Wild Side of Cycling” that I haven’t yet read.

Then comes another American racer who crossed the pond in the 1980s to try and break into the European professional peloton.  Joe Parkin wrote about his experiences as a pro racer in Belgium in “A Dog in a Hat.” 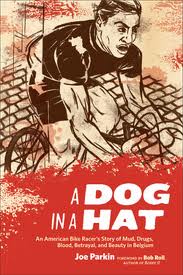 Parkin followed up with “Come and Gone,” his memoirs of a difficult return to road bike racing in the United States, and his subsequent rebirth as a mountain biker.

I read Michael Barry‘s “Inside the Postal Bus,” his recollection of his time as a domestique on the US Postal cycling team, some years ago.  Since then it has come to light that he had a spot of amnesia when it came to the use of performance enhancing drugs by the team.  I’ll have to read this book again now that we know what really went on in that bus. 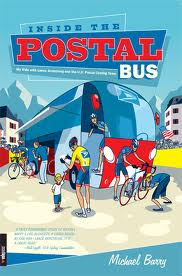 I’ll cover the rest of my rainy days collection in my next post.

I left Malaysia in 2008 as a non-cyclist. I am back home now with three road bikes and all the paraphernalia that goes with being addicted to cycling.
View all posts by alchemyrider »
← My Name is alchemyrider and I am a Bikeaholic
Still Too Wet to Ride? →