The lead up to this year’s BP MS150 ride from Houston to Austin was faultless.  Barbara collected my rider pack and Hess jersey for me.  Malaysian Airlines and KLM got me to George Bush Intercontinental Airport as scheduled.  Tom and Donna were waiting outside Arrivals for me.  The Omni Houston Hotel at Westside had my room ready.  Most importantly Fedex had delivered my Ritchey Break-Away bicycle to the hotel.

The first thing to do was to put the bicycle together.  My bike came with a Ritchey torque key that fits the 4mm bolts on their bars and stems, as well as the bolt on the hinged clamp that anchors the flanged joint on the down tube.  Steve Dodds at Bicycle Doctor USA had told me to pack an 8mm Allen key to install the crank with.  I also packed 6mm and 5mm Allen keys for the seat post and saddle mounting bolts.  Four Allen keys and a pump were all I needed to get the Break-Away ready to ride.

The plan was to do the Thursday evening ride with the West End 6.30 group.  That would have been the perfect shakedown ride for my brand-new bike, if not for the rain that afternoon.  Instead Tom and I made do with a quick 8km / 5mi loop around Memorial Park on Friday.  If that short spin was anything to go by, the Ritchey Break-Away was going to serve me very well.  The ride quality was everything I expected from a titanium frame.  The SRAM Force group set shifted precisely.  The brakes had good modulation and stopping power.  I didn’t expect problems during the ride to Austin but we stopped at West End Bicycles to get the bike inspected anyway.  It is worth getting an official inspection sticker.  If I did have a problem during the ride I would receive free labor for repairs.

The weather when I arrived on Thursday was unusually cool.  When we started the ride from the hotel at 6.30am on Saturday morning it was unseasonably cold.  It was 4°C / 39°F.  That was a record low temperature for April 20th.  The previous low was 6°C /44°F set in 1901.

Needless to say in my group I was probably the least appropriately dressed for the temperature.  I was riding with Barbara, Laura, Dane, Joe, Skip and Tom.  Everyone was cold, but I was chilled.  It had warmed up by the time we got to the lunch stop at Belleville, but not enough for me to take my jacket off.  Barbara and Dane kept their arm warmers on, unlike  Laura and Skip. 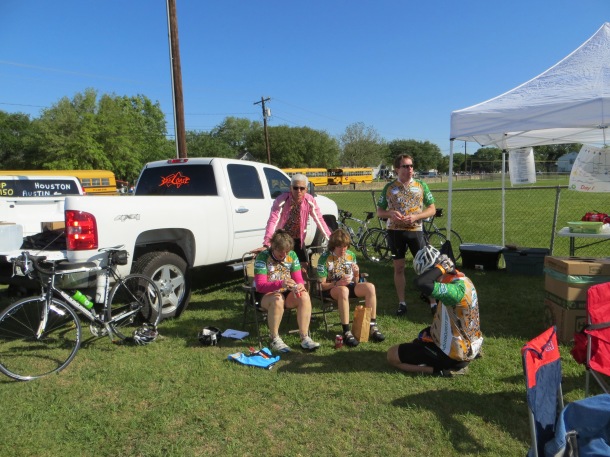 Relatively normal temperatures for the time of year were restored by the time we got to the stop at Industry.  West End Bicycles was operating their customary service stand there.  Complete with yummy snacks.  There was time for a post-cookie fist bump with Tom before we hit the road again.

Fayetteville is always a treat to ride through.  The residents come out in force to cheer the riders on.  And ring bells and blow whistles and generally carry on. 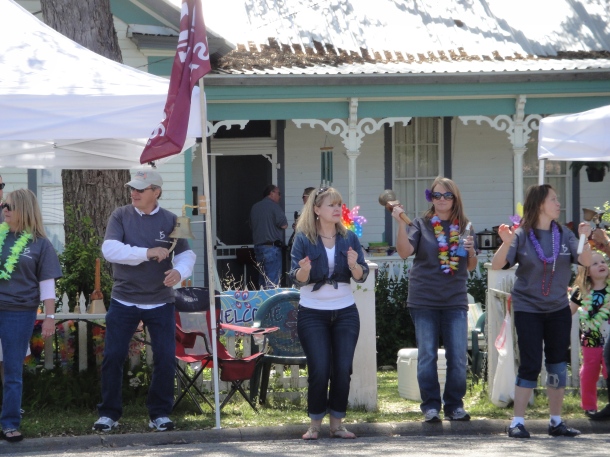 We had an additional treat in store for us at Fayetteville this year.  Skip knows a lady who runs an antique store out of a converted gas station.

For MS150 day she bakes all sorts of cakes and cookies which she lays out for anyone who wants some.  Not everyone knows about this though.  So hooray for Skip and his insider knowledge!

We had about 30 km / 18.5 mi to go to La Grange.  Dane headed out ahead of the rest of us.  His plan was to get to the VFW Hall early enough to reserve prime sleeping spots for us all.  We wanted a row of six camp beds near a wall socket.  We all had electronics that needed recharging.  We didn’t get the row we had hoped for, but we were near a coveted wall socket.  This is Tom watching Dane get sorted out after their turns in the private shower truck that Hess provides for its team.

This year the Hess bar featured recovery drinks made to order.  Just the ticket after a hot shower and before a massage. 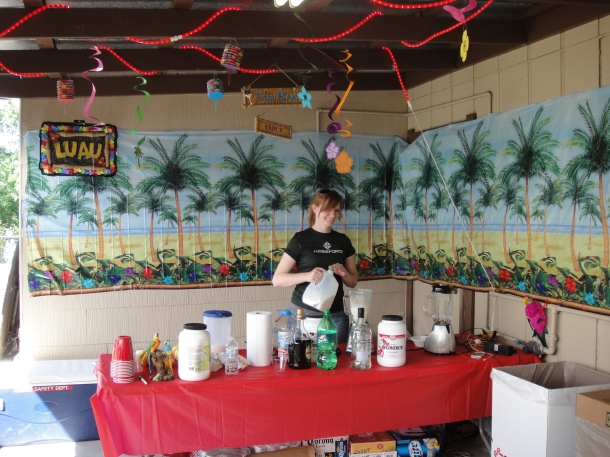 We are all spoiled by the excellent support that Hess provides to its riders.  Air-conditioning, private showers, indoor toilets, an open bar, ear plugs in case the snoring gets too loud.  I’m not sure how we managed when we rode with other teams and had to endure conditions like this.

Tom, Skip, “Sideshow” Dane and I went for a wander around the Fayette County Fairgrounds to stretch our legs before dinner.

We had ridden 160 km / 100 mi.  That made it my longest Day One in the three times I have ridden the BP MS150.  I was still a bit jet-lagged and very ready to call it a day as soon as I had finished my dinner.  Day Two wasn’t far away.

The National MS Society is still accepting donations linked to this ride.  The society is depending upon your generosity to raise as much as possible to put toward the search for a cure for multiple sclerosis.  Please click on the link below to make a donation to this worthy cause.

I left Malaysia in 2008 as a non-cyclist. I am back home now with three road bikes and all the paraphernalia that goes with being addicted to cycling.
View all posts by alchemyrider »
← Now There Are Three
2013 BP MS150 Day Two →