RSS Feed
← It Started With a Loud Pop
Reality Bites → 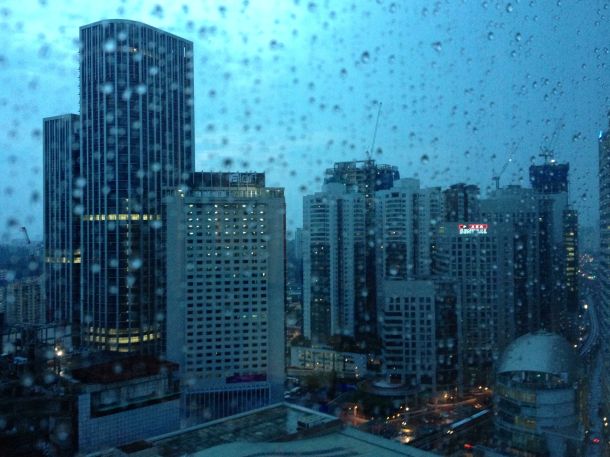 The weather had looked threatening all afternoon.  The heavens finally opened in spectacular fashion at 6.30pm.  Thunder, lightning, and lots of water.  This was the view from our hotel room at 7.00pm.  Droplets still running down the window, but the main show was over.

Emails about the weather were a common feature of ride days in Houston.  A number of online weather sites were consulted.  Screen shots of radar images went out.  Six Thirty riders looked out of their office windows and reported about the state of the roads along the ride route.  If the roads were going to be wet at 6.30pm the ride would be canceled.  The Six Thirty group never rode in the wet if it could be avoided.  I remember just one occasion where we got caught in a deluge about halfway through the ride.  Somewhere in the vicinity of the old Masonic Lodge on the corner of Brompton Road and North Braeswood Boulevard.  Whatever the weather there was one constant.  The words “rain” and “wind” were never used.  It was always just R and W.  One of those cyclists’ superstitions.  Which I will disregard for the rest of this post.

The weather featured large in Den Haag too.  Saturday morning Not Possibles rides and all other rides were preceded by a look at various weather forecasts.  The concern was less about the rain though.  It rains much less in Den Haag – 25 cm / 10 in annually than in Houston at 122 cm / 48 in per year.  Plus everyone in the Netherlands seems to be very comfortable with riding in the wet.  We often rode on wet bike paths and in the rain.  A waterproof jacket and SKS Raceblade Long fenders were essential items.

For The Not Possibles it was more about the direction of the wind.  The average windspeed in Den Haag is 28.6 kph / 17.8 mph compared to 13.3 kph / 8.3 mph in Houston.  The decision to be made prior to the start of every ride was which way to head out so that there would be a tail wind on the return leg.  The wind in Den Haag is a fickle beast though.  We had many rides where the wind seemed to be in our faces no matter which heading we were on.  On some particularly windy days we chose to sail along with the wind, spinning at an effortless 50 kph for an hour or more.  Then we would ride the train back home.

The amount of rain in Kuala Lumpur is double that in Houston.  We get 240 cm / 94.5 in a year here.  This evening’s downpour dumped a significant amount of water onto the streets.  Enough water for Albert K to call at 7.15pm to say that the Racun Cycling Gang evening ride had been called off.  The fall during last week’s ride is still fresh in the memory.  That no doubt contributed to the decision to cancel this evening.  I shall have to get used to the R getting in the way of riding here.

I left Malaysia in 2008 as a non-cyclist. I am back home now with three road bikes and all the paraphernalia that goes with being addicted to cycling.
View all posts by alchemyrider »
← It Started With a Loud Pop
Reality Bites →