RSS Feed
← Two Degrees of Separation
Creak (verb): To Make a Harsh, Grating Sound When Pressure or Weight is Applied →

Step One: Find the Meeting Point

The instructions for the Sunday morning ride with the Racun Cycling Gang seemed simple enough:

I was familiar with the road if not that particular McDonald’s outlet.  I fired up the Tom Tom and selected my destination.  I pulled into the McDonald’s parking lot on the MRR2 at 7.40am, pleased that I was right on time.  I walked into the restaurant and looked around for anyone clad in stretchy fabrics.  The first warning bell rang in my head.  I was the only one sporting bib shorts.  Fortunately I wasn’t fluorescent as well.  I looked outside.  The second warning bell rang.  There were no bikes to be seen.

A hurried phone call revealed that there is more than one McDonald’s on that section of the MRR2.  I wasn’t on time after all.  But not to worry.  This was Malaysia; the land of the never-on-time,  and not the Netherlands; the land of the fastidiously punctual.  Ten minutes later I was amidst a group of new-found fellow Lycra-wearers.

I hadn’t hauled my bike out of the back of the car upon my arrival.  Which was a good thing as the ride didn’t start there.  We all piled back into our cars and drove for another six kilometers or so to Kampung Batu Dua Belas, Gombak.  That translates literally as Twelfth Mile Village, in Gombak.  Naturally enough the village is at mile 12 on the Gombak Road.  And it wasn’t renamed after the country went metric.

The Gombak road used to be part of the main route from KL up over the spine of the Malaysian peninsula and down again to towns and cities on the east coast.  It has been superseded by the Karak Highway.  Which means that there is now hardly any motorised traffic on the old road.  Bicycles were another matter entirely.  I hadn’t expected so many and such a variety of bikes on the road.  I saw between eighty and one hundred cyclists during my ride that morning.

We found parking spots and got our bikes ready.  Three of us had road bikes; I had my purple steel bike, but the rest of the guys in the group pulled folding bikes out of their cars.  I quickly learned that folding bikes are very popular here.  At least for the distance we planned to ride that morning.  Which was about sixteen kilometers – straight up.  I did say that the road goes up over the spine of the peninsula.  Here’s the route:

We regrouped at the top of the climb to catch our breath, and in my case to also wipe the sweat out of my eyes and off my face.  Here are some of the Racun Cycling Gang:

Christine D saw this photo and sent me the following sweat control advice – which I definitely needed:

Using unflavored, uncoloured (no mint!) lip balm, draw a line on your skin, above your eyebrow, extending down past the side of your eye, to make a “hydro barrier” – do this over each eye. don’t put it on too thick or smear it. this channels the sweat away from your eyes.

Here’s some of the competition we had for the shade at the top of the climb. 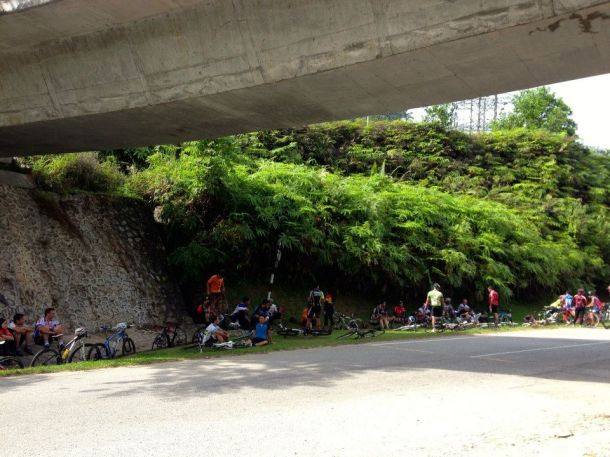 Once our pulse rates stopped hammering in our ears we rolled down the other side of this slope to the McDonald’s that is a rest stop on the Karak Highway for coffee and Cokes.  Then it was a sharp one kilometer climb back up to the point in the photo above, followed by a long sweeping descent back to our cars.

What a fabulous first ride!  The road runs through the rain forest that covers much of the country.  So while it was rabbits, ducks and geese on the bike paths in Den Haag, here I had to watch out for monkeys on the road, in this case long-tailed macaques.  The road surface is generally very good and there was very little traffic to contend with.  On my way down I passed perhaps three cars coming the other way, all driven by learner-drivers with instructors at their sides.  Presumably practicing hill stops and starts.  So I was able to descend with some speed.

The only niggle in my morning was a creak that developed at the start of the climb.  All creaks seem to emanate from the bottom bracket, but I am fairly sure that wasn’t the source.  A bit of a mystery to solve in the next few days.

I left Malaysia in 2008 as a non-cyclist. I am back home now with three road bikes and all the paraphernalia that goes with being addicted to cycling.
View all posts by alchemyrider »
← Two Degrees of Separation
Creak (verb): To Make a Harsh, Grating Sound When Pressure or Weight is Applied →