The Eddington Number for Cycling

When I first started using VeloViewer, I focused primarily on the graph showing distance cycled by year.  My main goal in 2015 and 2016 was to cycle further than I had in any previous year.  This zoomable graph was one way to track my progress, ride by ride, against that goal. 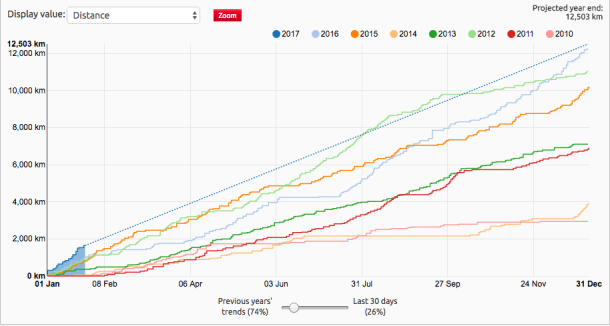 VeloViewer displays a plethora of other data, spread across eleven pages.  You can read an overview which I wrote more than two years ago here.

I occasionally browse the other pages, but I spend most of my time on only two pages.  The Update page, where you import your Strava data into VeloViewer, and the Summary page, where the graph above, and other charts and tables, are displayed.

It was many months before one item, highlighted in red in a panel titled Activity Stats on the Summary page, caught my eye.  It was a button labeled “Eddington”.

Which I soon found out stood for “Eddington number”.

Arthur Eddington was also a cyclist.  He is credited with devising a measure of a cyclist’s long-distance riding achievements. The Eddington number (E-number) for cycling is defined as the largest number E, where you have cycled at least E kilometers / miles on at least E days.  For example an E-number of 50 kilometers means that you have ridden 50 kilometers or more on 50 or more days.

Achieving a high Eddington number is difficult, since moving from, say, a metric 80 to 85 will probably require more than five new long distance rides, as any rides shorter than 85km will no longer be included in the reckoning.

VeloViewer displays an informative graph when you click on the red “Eddington” button in the Activity Stats panel.

The blue bars show the number of times each distance (you can select kilometers or miles) has been completed.  The top of the orange bar intersects with the orange E-number line.  The orange bar shows your current E-number.

A more interesting feature pops up when you hover the cursor over a bar.

The pop up box shows how many days you have cycled the distance denoted by that bar.  For bars to the right of the orange one, the pop up box also displays the number of days you need to cycle at least that distance for it to become your new E-number.

My current metric lifetime E-number is 104.  VeloViewer tells me that I have covered at least 104km on 113 days.

Which is what makes the E-number an interesting, and I am sure to Type A cyclists, an addictive measure of progression.  It gets more and more difficult to increase your E-number. 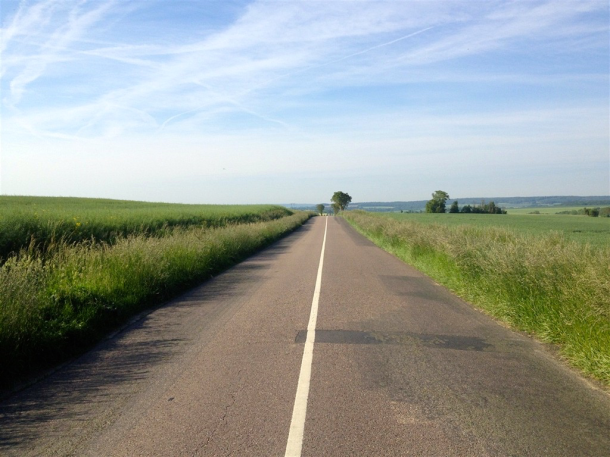 I left Malaysia in 2008 as a non-cyclist. I am back home now with three road bikes and all the paraphernalia that goes with being addicted to cycling.
View all posts by alchemyrider »
← Another Udang Galah Dinner – Courtesy of the Bukit Bintang Rotary Club
Chinese New Year 2017 Tour →