My Not Possibles friends in Den Haag rode the Joop Zoetemelk Classic yesterday.  By all accounts it was cold and windy, with a high of 8°C / 46°F.  My West End friends in Houston are just about to start the Tour de Houston.  It is a balmy 17°C / 62°F in downtown Houston now.  It was 34°C / 93°F by the time Chon, Mark, Marvin and I finished our ride in Hulu Langat today.  Houston wins the best biking weather award for this weekend.

We rode from Kampung Batu 18 along Jalan Sungai Lui to the T-junction with the B32 and the B19.  Logically enough Jalan Sungai Lui follows the Lui River along the valley floor.  At the junction the only option is to turn left onto the B32 road.  The B19 is still closed 5km from the T-junction because of the landslide that dropped a section of tarmac into the reservoir.

The B32 takes you to the border between the states of Selangor and Negeri Sembilan.  The border is at the top of a 10km climb that rises from 170 meters / 560 feet above sea level to 500 meters / 1,640 feet above sea level.  It was very misty at the start, which meant great views once we got about a third of the way up the climb. 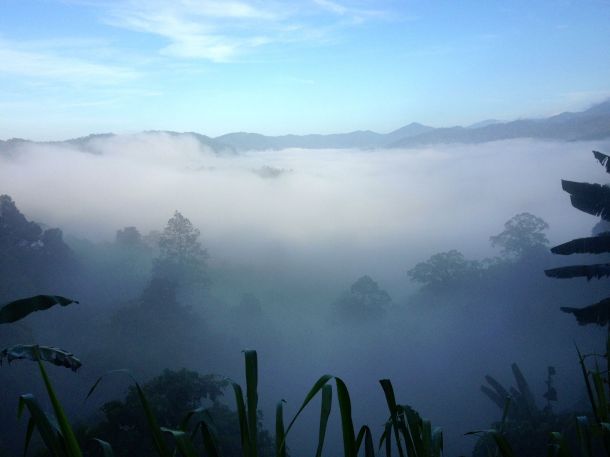 Genting Peres isn’t the steepest climb in the area.  Nevertheless we appreciated the stop to take photographs.

Photo courtesy of They Wei Chon

It was still hard work, especially after we broke through the mist into bright sunshine.  I am sure I leaked the equivalent of a Camelbak Podium Chill bottle by the time I got to the summit.  Mark and Chon are waiting for Marvin, who got extra credit for doing the ride on a 29er mountain bike with knobbly tires.

I explored a bit, and found these decorative blocks at the base of the “Terima Kasih.  Sila Datang Lagi / Thank You.  Please Come Again” sign behind the guys.  Not bad for a sign that most people whizz past in cars.

The plan was to go back the way we came to Kampung Batu 18, and then ride on to Sungai Chongkak Recreational Forest for a nasi lemak and teh tarik breakfast.   It was a hot and humid second half of the ride.  The thought of packets of tasty nasi lemak sustained us through the 6km climb to the restaurant.

Our disappointment was palpable.  Our mood was not improved by the very mediocre roti canai we ended up with at Kampung Batu 18.

There was one saving grace for all of us.  The thick undergrowth between where we always park and the river has recently been cleared.  So we could get to some cool water to wash the sweat off our faces and arms. 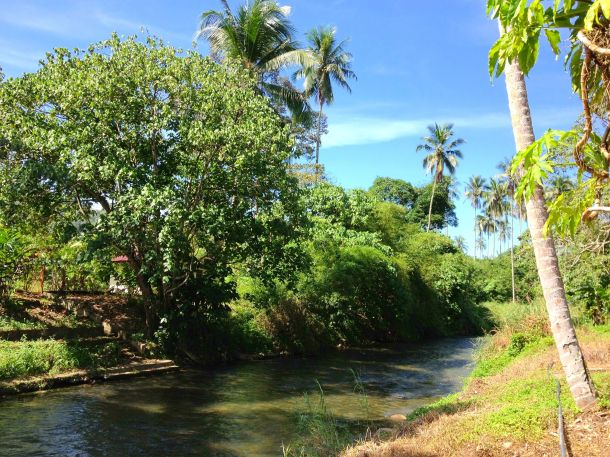 There was another plus for me.  ISKY 2 has stopped ticking.