The West End Bicycles Six Thirty group in Houston has Ted’s Taco Ride.  Mark’s Nasi Lemak Ride could become the equivalent for the Racun Cycling Gang in Kuala Lumpur.  Roti canai and teh tarik have made frequent appearances in my posts.  This is the first time I have mentioned nasi lemak.  Nasi lemak is another quintessential Malaysian dish.  Best described by a good friend of mine, Azlan Zahari Zahid, who writes a blog titled The Nasi Lemak Journal.  Click on the link to his blog to read his description of this very popular dish.

Mark Lim suggested that we add a ride to the Sungai Congkak Recreational Forest to the end of our round trip from Kampung Batu 18 to the Sungai Tekala Recreational Park.  More specifically, to the nasi lemak at Sungai Congkak.  Mark, Chon and I set off at 7.15am for Sungai Tekala.  Two hours later we were back at Kampung Batu 18 and ready for the main event of the day.  After a final 75 meters / 250 feet  of climbing we pulled up to an unassuming stall on the bank of a small river.

This is what we came for.

Individual packets of nasi lemak wrapped in banana leaf.  The traditional way of serving this dish.  Here’s what was inside each packet. 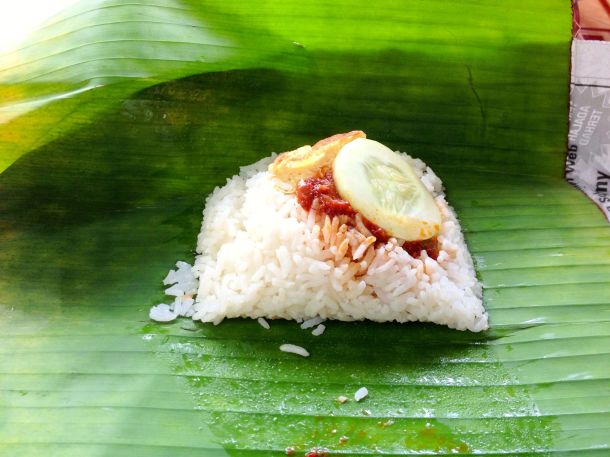 A little mound of coconut and pandan flavored rice topped with a sambal made from chillies, onion and dried anchovies, a slice of cucumber and a bit of omelette.  Simple and delicious.  We demolished two packets each in next to no time.  Which turned out to be the last of that batch of nasi lemak.  When Marvin and his friend, whom we had met up with toward the end of our ride, arrived a short while later they had a thirty minute wait for the next batch to finish cooking.

The stall was relatively cool, nestled as it was at the edge of the jungle and next to a small river.  The water made a pleasant roar as it tumbled over the rocks. 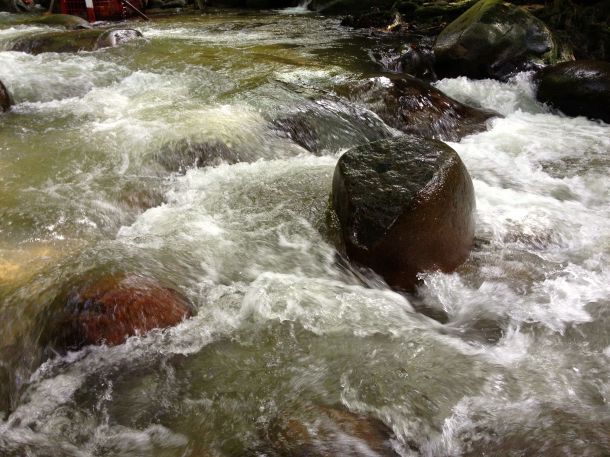 We sat with our teh tariks and enjoyed each other’s company and the calm surroundings.  My sense of well-being due no doubt to the two helpings of nasi lemak that I had just devoured.  As I gazed around the stall I noticed a framed newspaper article on the wall titled “Me and My BMI.  Nasi Lemak and the Art of Bicycle Maintenance.” 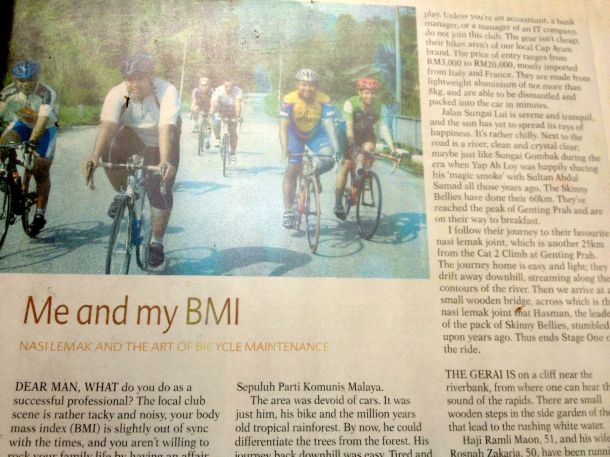 It turns out that this particular nasi lemak stall is well-known.  The proprietor Haji Ramli Maon and his wife Rosnah Zakaria have been serving one of Malaysia’s favorite breakfast meals to cyclists and non-cyclists alike for more than fifteen years.  A stream of whom had turned up on bikes and in cars as we sat there.

Marvin and his friend got their nasi lemak, piping hot and fragrant, fresh out of the pot.  They agreed it was worth the wait.  Mark, Chon and I had a third packet each.  We couldn’t resist.  Especially when a packet costs only RM 1 / USD 0.33.  My somewwhat excessive breakfast of three packets of nasi lemak and two teh tariks cost the princely sum of RM 6 / USD 2.  I paid the equivalent of fifty nasi lemaks to the guy who came by selling bottles of jungle honey.  If he is to be believed that honey is a miracle cure for most any ailment.  Mark has already tried some of his.  He confirms his thumbs up rating for the honey. 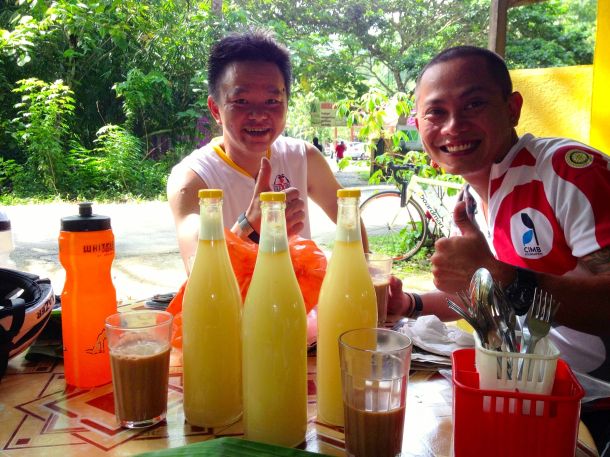 Chon (left) and Mark, jungle honey and teh tariks.

I give the whole morning a thumbs up.  I don’t think this will be the last Mark’s Nasi Lemak Ride.

I left Malaysia in 2008 as a non-cyclist. I am back home now with three road bikes and all the paraphernalia that goes with being addicted to cycling.
View all posts by alchemyrider »
← 2 Into 6 ft²
Austin or Bust →